There are at least 15 heroes living in this city.[1]

The Evacuation Shelter is a public shelter located in J-City, built by the Hero Association for use in the event of an attack by high-level Mysterious Beings. It was used when the Deep Sea King attacked, although it was broken open. Externally, it consists of a giant dome with circular windows lined around the top.

Smelly Lid Prison is a high-security prison that holds some of the world's most dangerous criminals. It is located on a small island just off the coast of J-City.[2] The S-Class Hero, Puri-Puri Prisoner, is imprisoned in this facility and regularly breaks out to do hero work.

There is also a Junkyard located on the same island as the prison, which is where the monster TV Junkyard Monster was created. 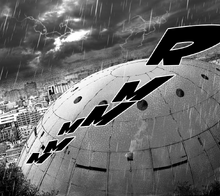 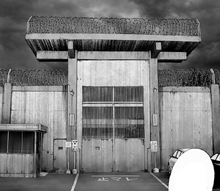 J-City is invaded by the Seafolk. The A-Class hero Stinger is able to fend most of them off until the Sea King arrives.[4] The Sea King rampages through the city, causing chaos and defeating the heroes Lightning Max, Puri-Puri Prisoner, Bunbun Man, All Back-Man, Jet Nice Guy, Sneck, Mumen Rider, and Genos. Before finally being stopped by Saitama.[5]