Iaian (イアイアン, Iaian; Viz: Iairon) is the A-Class Rank 2 professional hero of the Hero Association and the top disciple of Atomic Samurai.

Iaian is a young man with short blonde hair and blue eyes. He wears a long-sleeved black shirt under his sleeveless medieval iron armor with a shoulder pad on his left shoulder. In his first appearance, he also sported a matching medieval iron helmet. He carries his sword on his left hip. During his fight with Melzargard, he lost his left arm.[2] 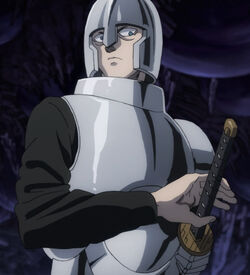 Iaian with his helmet

Iaian is shown to be quick-tempered as witnessing the widespread destruction of A-City, an act he deems "unforgivable," enrages him.[2] Also, upon being attacked by a mysterious alien, Iaian gives no quarter and responds immediately with an attack of his own.[2] He is quite headstrong and cocky since he was willing to take on Garou head-on to make his master proud of him without regarding his strength,[3] although this can also be interpreted as a deep desire to make his master proud of him.

Iaian is described to be persistent in battle, refusing to back down regardless of whether his enemy is stronger or more skilled.[1] This is likely the reason Atomic Samurai constantly interrupts his battles against opponents like Rhino Wrestler,[4] and Melzargard.[2] Despite his persistence, he is in fact very analytical in battle, determining the strength of his opponent and all of their abilities. He also does not underestimate his opponent, and constantly warns his two comrades, Bushidrill and Okamaitachi, to be on-guard.

As a seasoned warrior, Iaian is also quite perceptive in and out of battle. Namely in regards to understanding the mindset of others around him. Having picked up on Sweet Mask's bloodthirst from when the A-Class hero slaughtered the leftovers from the alien invasion. He made the snap decision to double back and prevent another massacre at the hands of the idol and save the brainwashed mercenaries.[5] Being the cool and collected type; instead of getting into a heated debate, Iaian suggests to Okamaitachi that they run a thorough background check on the superstar afterward.

As a top-ranking A-Class hero, he is an extremely skilled and powerful fighter. According to Fubuki, Iaian and his fellow teammates could've been S-Class if it wasn't for Sweet Mask's gatekeeping. It is worth noting that while he was weakened after losing his arm, he still remains a strong combatant.

Immense Speed and Reflexes: Iaian is shown to possess outstanding speed and reaction time, as he was able to narrowly avoid a sneak attack from Melzargard from behind along with dealing a counter-attack shortly afterward and managed to hold his own against the monster for a while.[2] He also dodged a follow-up attack from the alien at close range, though not completely, as he lost his left forearm from it.[2] He is also capable of performing multiple slashes within a second, and is fast enough to speed past and cut a wave of bullets while slicing Tongara's rail gun into pieces in the blink of an eye.[6] Iaian's amazing speed was once again shown when he was able to intercept Sweet Mask's attack that intended to decapitate the entire Narinki's Private Squad with the speed somewhat surprising the handsome hero.[7]

Immense Strength: Iaian was strong enough to stop the charge from Rhino Wrestler, a Demon-level monster, something that even a group of A-Class and B-Class heroes together were not able to do.[8] Rhino Wrestler even acknowledged the strike to his horn, rating it a 69 out of 100, which is much higher than what he rated the other heroes' attacks.[9] He was also strong enough to slice The Organization's rail gun and damage their highly durable armor being used by Tongara.[10] Additionally, Iaian was capable of slicing through Tatsumaki's psychic barrier which she created to shield him from the destruction of the Monster Association HQ.[11]

Enhanced Endurance: Iaian has a high pain tolerance, as he only displayed shock and no signs of outward pain from having his left forearm blasted off from Melzargard's attack.[2] He was also the only one out of the three disciples who could still fight along with the rest of the heroes against the Monster Association cadres, despite having just beaten by one of the latter.

Enhanced Senses: Iaian can sense murderous intent around him, and can strike without needing to open his eyes.[12]

Expert Swordsman: Being the top disciple of Atomic Samurai, Iaian is extremely skilled with the sword. He has been shown to have a rather keen grasp of what is happening around him, easily avoiding an attack from a large monster and then returning a strike right after.

Katana: Iaian carries a katana that has a black hilt with a circular hand-guard. The sheath is painted black.

Knight Armor: Despite studying swordsmanship under Atomic Samurai, he dons an iron knight-like armor instead. During the invasion of the Dark Matter Thieves, the helmet was crushed by Melzargard's sneak attack. His armor was made by a famous blacksmith.[1] 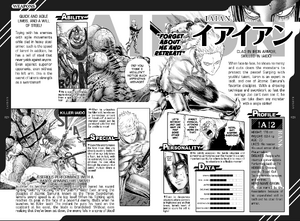