Edit
watch 01:15
Monster Spotlight: Homeless Emperor
Do you like this video?
Play Sound

Homeless Emperor (ホームレス帝, Hōmuresu Tei, Viz: The Homeless Emperor) is a Dragon-level Mysterious Being and an executive member of the Monster Association.

Homeless Emperor is a disheveled-looking human male. He has long, unkempt black hair and a short beard, and he has bags under his eyes. His shabby outfit consists of a dark tracksuit along with a pair of fingerless gloves, a tattered cape tied around his neck, and a small crown on his head. 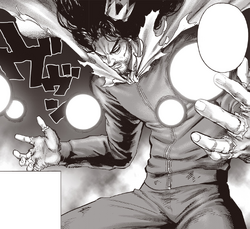 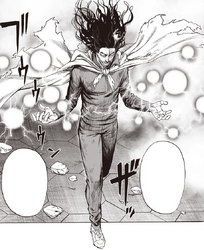 Before gaining his powers, Homeless Emperor was a simple blue-collar worker. After being kicked out by his landlord and becoming subject to public humiliation, he began living as a recluse and garnered a hatred toward his misfortunes. But when he looked into the sky, he let the resentment towards his moronic abusers wither as he realized that his life, and humanity as a whole, had little importance compared to the grandeur of the world.

Upon gaining this new perspective on the nature of Earth, Homeless Emperor suffered a crisis of conscience after realizing how deviant his kind had become. Viewing how the dilapidated said imbalance in humanity's relationship with their biosphere was. He found that the only way to escape wretched society and live with mother earth was to die. However, after meeting "God" and gaining his powers, he found a new purpose. Developing a messiah complex, Homeless Emperor believing it to be his divine duty to exterminate mankind in order to save the planet and bring stability to nature. Seeing himself as above the lesser dealings of modern civilization, feeling humans and everything they built should be wiped out due to their cancerous and narcissistic way of life. Homeless Emperor also became rather arrogant and egotistical, believing that he alone is capable of killing all of the S-Class heroes and smugly taunted Zombieman during their battle. This superiority complex is also directed towards other mysterious beings, that according to him are unable to expand their minds and are therefore inferior to people chosen by God such as himself.

Homeless Emperor was once a raw recruit at a company, but he ended up getting fired after a new employee welcoming party due to being accused of sexual harassment. This was after his manager had forced him to parade around the festivities while naked. With the loss of his occupation, he was kicked out of his house and became a vagrant.

Homeless Emperor began living in a park, his bitterness eventually abated as he obtained a new perspective on life; humanity's existence pales in comparison to the grandeur of Earth. One day, he had a sudden and hard realization that the world was being trampled upon by those same self-centered humans who had abandoned its natural ecosystem for their man-made rules. He decided that the only way to escape the modern world and return to nature was to die.

At the time he was about to commit suicide by hanging, an enigmatic entity, whom he claims to be "God," suddenly appeared before him. The being told him that he shares Homeless Emperor's sentiments about the nature of humans, convincing him that he doesn't need to die and then granted him powers. Homeless Emperor then resolved to exterminate humanity using his newfound powers.[1]

Homeless Emperor is first seen meditating in preparation for the upcoming battle with the Hero Association.[2] He is later summoned with the other executives of the Monster Association before Orochi by Gyoro Gyoro.[3] In this meeting, Gyoro Gyoro gave them instructions on which S-Class hero each executive should target for optimal battle results. He is also seen later feeling the impact from Saitama's punch on Overgrown Rover.[4]

Homeless Emperor eventually encounters Zombieman, sneaking up on him while he was distracted by the sounds of Atomic Samurai and Black Sperm's battle. He proceeds to give the hero trouble by hitting Zombieman with so many explosions that his regeneration ability cannot keep up and he cannot fight back. Zombieman then begins to distract Homeless Emperor by getting him to explain his backstory in order to buy his body more time to regenerate.

As Zombieman, Child Emperor, and Sweet Mask marvel at Tatsumaki's psychic might, several of Homeless Emperor's energy spheres appear from the rubble and soar towards the three heroes. Sweet Mask dodges out of the way while Zombieman pushes Child Emperor to the side, taking the full brunt of the attack. Homeless Emperor emerges from a cloud of smoke, rhetorically asking the brutalized Zombieman what part of him is human.

While staring at a severely injured Zombieman and seeing the situation in the surface, Homeless Emperor notes that Gyoro Gyoro and Orochi might have been defeated and claims that they were not fit to lead the organisation. Suddenly, Sweet Mask emerges from the smoke that was created by Homeless Emperor's own energy spheres, attempting to attack him. However; before the hero can reach him, Sweet Mask is restrained by Black Sperm mid-air, who suddenly bursts out of the ground. Homeless Emperor then witnesses Fuhrer Ugly appear and mercilessly brutalise Sweet Mask shortly before tearing him in half and tossing him away.

After Sweet Mask is defeated, Homeless Emperor along with Fuhrer Ugly and Black Sperm set their sights on Child Emperor, who is trying to take an incapacitated Zombieman and go away from them while simultaneously informing the other heroes via his locator about the presence of the Monster Association's executive members. Fuhrer Ugly then quickly comes to the two heroes, destroying a broken Zombieman by stomping him, and is about to murder Child Emperor with a punch. However, Homeless Emperor manages to intercept him and steal his prey by firing a huge energy ball at both him and the child hero that drives a massive trench through the ground with Fuhrer Ugly narrowly avoiding it.

This section is missing information. You can help by updating it.

When Bang joined the fight and slaughtered Fuhrer Ugly and Gums, Psykos contained him with her telekinesis while Homeless Emperor incapacitated him with a powerful blast. Moments later King showed himself, standing alone against the remaining executives: Homeless Emperor, Psykos, Evil Natural Water and Black Sperm. Homeless Emperor tried to make the first move, but just as he was about to attack King advised him that, since the headquarters was in ruins, he had to pay attention to the loose rocks under his feet in order not to fall. Homeless Emperor took it as a metaphoric way of saying that he was powerless against King, and that even a four-on-one fight would be no problem for the strongest man on Earth. This thought left Homeless Emperor in a state of shock, and his hesitation made the other executives uncertain about attacking King as well.

Eventually, Fubuki arrived and took on Psykos, so Homeless Emperor decided to take the initiative on attacking King once again. While he was thinking of a good way to attack the most powerful man on Earth, Zombieman caught him by surprise by attacking him from behind. He pinned him to the ground, pointing out that now Homeless Emperor couldn't attack him with explosions without catching himself in the blasts as well. The hero then started interrogating him on the nature of his powers, but before Homeless Emperor could say anything he experienced a vision where he was in a giant field with God looming above him. God expressed its disappointment in Homeless Emperor before taking back his powers, killing him in the process and causing his body to disintegrate from Zombieman's grasp.

As a high-ranked member and a Dragon-level Mysterious Being of the Monster Association, Homeless Emperor is an extremely powerful being. Even though he's decently fast and possesses a massively destructive power, Homeless Emperor is not suited for close-quarters combat since his body is that of a regular person,[5] and as such, has a much more difficult time with quick hand-to-hand battles.

Gyoro Gyoro believes that if Homeless Emperor and Black Sperm team up together that they can kill anyone.[6]

Enhanced Speed & Reflexes: Homeless Emperor possesses impressive speed and reflexes compared to normal humans, being able to quickly react to and dodge an attack from Zombieman from behind him along with dealing a counter-attack simultaneously.[7] He was also fast enough to counter point-blank gunfire from Zombieman by using his energy sphere to block the bullet.[7]

Enhanced Stealth: Homeless Emperor was able to approach Zombieman and catch the hero completely by surprise when he announced his presence.[7]

Energy Projection: Homeless Emperor is able to summon and control energy spheres which are capable of great destruction, an effect not too dissimilar to the power of Vaccine Man.[7] These spheres explode upon contact and can be "charged", increasing their size and destructive capability,[8] and can even be used defensively to destroy incoming projectiles.[7] There seems to be no limit to how many energy spheres he can create, as he manifested hundreds if not thousands of energy balls to pursue Tatsumaki.[9] The offensive might of these spheres is so great that Black Sperm, an extremely powerful monster and fellow executive member, was surprised by it.[10] According to Black Sperm, Homeless Emperor does not seem to use up any energy to create these spheres, even after releasing a massive one, this made Black Sperm wonder whether the energy needed to create such spheres comes from somewhere else.[11]

The spheres are comparable to miniature suns and were powerful enough to not only cause Zombieman to admit Homeless Emperor's superior strength, but also temporarily knock Bang out of commission, who had just finished killing two dragon level monsters with ease. However, they weren't powerful enough to penetrate Tatsumaki's psychic barriers; even at their full power.

Long-Range Combatant: Homeless Emperor's main fighting style is to maintain a distance from his opponents and bombard them with his energy spheres.[7] Due to his physical specs only being similar to that of regular humans, he seems to prefer to not get too close to his opponents in order to prevent critical injuries that will potentially result to his defeat.[13] Apparently, he likes to take advantage of his opponents not being on their guard and take them down by surprise attacks, as demonstrated when he caught Sweet Mask, Child Emperor and Zombieman off-guard after emerging from the underground.[14] Homeless Emperor is also able to pursue flying-targets by sending countless energy spheres after them, as seen in his pursuit of Tatsumaki.[15]