Gyoro Gyoro (ギョロギョロ, Gyorogyoro)[2] was the meat puppet of Psykos. He existed as an independent entity that allowed Psykos to manage the Monster Association without revealing her identity. Orochi was the only one aware of its true identity. He was destroyed by Tatsumaki.

Gyoro Gyoro appears as a large slug-like monster with a single eye (colored red in the manga and blue in the anime), with no visible facial orifice and eight arms protruding through his head. He has four main arms, stubby legs, three toe feet, and a fat circular body, which is green in the manga and pink in the anime. He is fairly large, towering over humans and smaller monsters, but is still dwarfed by giants such as Orochi.

During his fight with Tatsumaki, Gyoro Gyoro reveals its true form, darkening his skin and causing numerous eyes to appear all over his body. 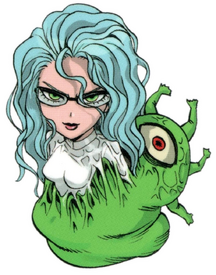 Gyoro Gyoro was created by Psykos an unknown time ago to manage the Monster Association incognito.

Gyoro Gyoro is speaking with Monster King Orochi about the monster raid's situation and Gouketsu whereabouts.[3]

After Tatsumaki killed the Hundred-Eyes Octopus, Gyoro Gyoro finds the situation troublesome, but Orochi sees it as not a concern because they can make as many Mysterious Beings as they please.[4]

Through his robot, Metal Knight questions Orochi and Gyoro Gyoro about their goals. While they tell him destruction is a natural part of a monster's instincts, it is not their end goal.[5]

He gives a massive speech to the member of the Monster Association and witnesses Orochi eat Awakened Cockroach, as well as persuading Orochi to spare Do-S for her useful ability.[9] Through his drones, he sees Gouketsu's headless corpse and is disturbed that someone could defeat one of their executive members.[10]

Gyoro Gyoro leaves a message to Garou telling him rest within his cell. Later, Gyoro Gyoro was seen deciding on the fate of Narinki's Private Squad that attacked them. Gyoro Gyoro questioned G5 on how he found out about the Monster Association and answered the Machine God's question on attacking other monsters. Afterward, Gyoro Gyoro offered a deal to Garou to join the Monster Association as an executive member to help boost their forces after the loss of Elder Centipede and Gouketsu. When Garou left to kill a hero, Gyoro Gyoro ordered Royal Ripper and Bug God to tail Garou and watch his movements.[11]

Phoenix Man later questions Gyoro Gyoro on the purpose of sending combat types to observe Garou as both Royal Ripper and Bug God can decide to kill Garou on a whim. Gyoro Gyoro reveals that it is a test and to facilitate Garou's growth, stating that he needs to be ravaged both physically and mentally.[12] Gyoro Gyoro, in particular, is excited to see what changes Garou will undergo as a result of experiencing monsters. Gyoro Gyoro further reveals to Phoenix Man that Orochi was once a human that, after countless failures and sacrifices, became the ultimate being. Gyoro Gyoro created Orochi and that only it knows the secret trick of doing so. He mentions that with the right nourishment, Garou has the potential of becoming a second Orochi, but that if he dies then he was never good enough.

During Royal Ripper and Bug God report about Garou, he sees through Ripper's lies and asks him to tell the truth in which Bug God tells what really happened during their fight with Garou. Afterward, Royal Ripper begins to question the fact that Garou was quite a formidable foe, which is why Gyoro Gyoro intentionally sent them after the Hero Hunter since he knew both of them would turn on the Human Monster and strong enough to potentially kill him. Gyoro Gyoro then asks whether he is dead in which both Royal Ripper and Bug God respond that he probably is, despite not checking on him carefully.

As Gyoro Gyoro takes note of Tareo, he wonders who the child is, in which Royal Ripper states that he is his toy to play with or else he would have to cut someone else to quell out his blood lust. Consequently, Gyoro Gyoro angrily scolds him not to playing around since he had found the scouting robot used by Child Emperor to scout the Monster Association Headquarters and firmly stating that the S-Class heroes are not to be taken lightly as he assumed that one of them executed Elder Centipede and Gouketsu as well as the fact he does not know the secret weapon, the Hero Association is hiding.

Later, when Garou takes a secret tunnel into the Monster Association base, Gyoro Gyoro immediately detects that there is an intruder. He only recognizes that the intruder is sending a biological signal, and is either a human or a monster. He sends monsters to Garou's location with orders to kill the intruder if it is a hero and welcome it if it is a monster.

Garou's rampage attracts Overgrown Rover, who assaults him and sends him crashing into Gyoro Gyoro's private room. Gyoro Gyoro is pleasantly surprised to see Garou alive, complimenting him for living up to his expectations and for growing so much stronger. He lifts the rubble off of Garou, but then forcefully restrains him. He asks Garou to have a quick talk.

Gyoro Gyoro tells Garou the secret of breaking the limiter as someone who must repeatedly experience death and overcome it.[13] He goes over his experiences and experiments to arrive at that answer and shows Orochi as his first success. He attempts to convince Garou to let him raise him into the most powerful monster, but he refuses. When Garou begins to adapt to the psychic restraint, he lets Orochi battle him. At some point, Gyoro Gyoro tells Rhino Wrestler that he has improved and became a Demon-level threat.[14]

Gyoro Gyoro watches as the heroes strike team to attack the wave of monsters in the ghost town of Z-City. After the battle, he calls upon, Black Sperm, Nyan, Homeless Emperor, Gums, Orochi and Fuhrer Ugly for a talk.

During the Monster Association invasion, Gyoro Gyoro meets Tatsumaki at the Association main hub and both start to fight. Gyoro Gyoro goes for the offensive and releases an immense barrage of energy and rubble to crush Tatsumaki inside a condensed ball of concrete. However, his attack is ineffective as it is revealed that Tatsumaki is unfazed and she proceeds to blow Gyoro Gyoro's arm off. Impressed by Tatsumaki's esper powers, Gyoro Gyoro transforms into his true form, becoming bigger and gaining many more eyes on his body. He continues to attack Tatsumaki by increasing the gravity around her 300 times, only for the hero to be unharmed. Tatsumaki retaliates against Gyoro Gyoro by tearing him apart effortlessly. Gyoro Gyoro admits that Tatsumaki's powers are much greater than he originally perceived but still complains that she finished him off so brutally. Tatsumaki asks him why he is complaining since meat puppets are supposed to not feel pain and tells him that she will force his body out of the puppet. Shocked by this, Gyoro Gyoro calls for Orochi as an act of desperation and is shocked when the Monster King doesn't show up, wondering what kind of opponent he is facing so that he could even ignore Gyoro Gyoro's command.

Gyoro Gyoro sends a spy drone to discover who attacked Orochi. After finding the mask of Orochi and believing him to have been defeated, the drone tries searching around and detects King, and the latter runs away from the drone upon seeing it. As the spy drone pursues King, Saitama suddenly appears behind the drone and destroys it with a clap. Gyoro Gyoro, not fully understanding what just happened, believes that King managed to sneak behind the spy drone and destroy it so quickly that it did not even realize.[15] Tatsumaki levitates Gyoro Gyoro's devastated body and the monster attempts to attack the hero with multiple energy beams but fails to do any damage. She proceeds to rip a body out from inside Gyoro Gyoro, but discovers that it is just a meat puppet. She then senses the presence of the true puppeteer deep underground, Psykos, and turns her attention towards the latter to finish the job.

As a Dragon-level threat, Gyoro Gyoro was extremely powerful. He was the direct military advisor to Orochi, and was strong enough that the Monster King has high faith in Gyoro Gyoro's abilities, unlike other members. Prior to discovering Tatsumaki's true power, Gyoro Gyoro believed that he was more powerful than her; whom he had considered as one of the only four heroes capable of defeating Elder Centipede. However, Psykos states that Gyoro Gyoro is not nearly as powerful as she truly is in person.

Transformation: When under pressure Gyoro Gyoro was able to transform into his true form, darkening his skin and causing numerous eyes to appear all over his body. In this form, his psychokinetic abilities are increased.

Psychokinesis: Gyoro Gyoro was capable of moving objects with his mind such as the rubble that fell on Garou when the Hero Hunter landed in his chambers along with stopping his movements completely. However, Gyoro Gyoro cannot multitask very well, a flaw that can be exploited.[16]

His psychic powers also allow him to sense the layout of the Monster Association headquarters underneath Z-City and thus keep track of whoever enters it. His ability is sensitive enough to tell if a being is a machine or living.[17]

Flight: As an esper, Gyoro Gyoro was able to use psychokinesis to levitate.

Spy Drones: Gyoro Gyoro had several spy drones that are shaped in his image. He can communicate through them as well as see things outside his line of vision.

Gravity Manipulation: Gyoro Gyoro was able to manipulate gravity to control debris and the surroundings. In his ultimate form, he can increase gravity by three hundred times.

Shield Projection: Gyoro Gyoro was able to project an energy shield to protect his body from attacks.

Psychic Combatant: Gyoro Gyoro was a skilled esper, who utilized telekinesis in combat.

Knowledge of Monsterfication: Gyoro Gyoro experimented on many monsters, modifying them in various ways, in an attempt to break their limiters. He figured out a way to seemingly do so, and turned Orochi into the "ultimate being." He also claims that he can accelerate the process of monsterificaiton.

Power Level Measuring: Gyoro Gyoro is able to analyze any individual's power. How Gyoro Gyoro evaluates people's power is unknown, but he's the one responsible for evaluating the disaster level of the Monster Association's members. He was also able to measure Garou's exceptional growth after re-encountering him after he is fought against Overgrown Rover, unlike previous monsters who underestimated Garou despite his feats.[21]