Gums (ハグキ, Haguki) is a Dragon-level Mysterious Being and an executive member of the Monster Association.

Gums is a large, gluttonous and rotund monster with two arms and two legs. Its head contains no features other than an incredibly large mouth that lacks any lips. In the webcomic, he has a more humanoid body shape. Its size changes constantly, from being slightly taller than Homeless Emperor, a human being of average height, to easily fitting the extremely large and tall hero Pig God in his mouth. It is unknown whether Gums can grow in size, aside from when it consumed something. 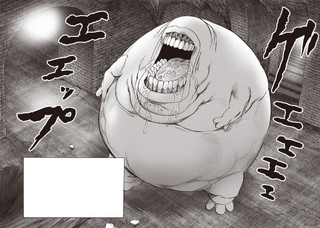 Gums appears to be incapable of speech. As it is called into a meeting, it seems to be intelligent enough to understand speech. However, it is incredibly gluttonous and driven by the desire to consume.

Gums eats some monsters before the battle against the Hero Association.[1] Gums and several other monsters are called by Gyoro Gyoro for a meeting.[2]

Gums sneaks up behind Pig God and swallows him whole, only to have Pig God fight his way back out of Gums' mouth, and the two engage in hand-to-hand combat.[3] After a relatively short battle, Gums stands victorious.[4]

The following section contains original webcomic spoilers. Expand to see spoiler content.
Later, Gums is seen rising from the rubble and joins up with the other Dragon level monsters to fight Tatsumaki. When Genos attacks Fuhrer Ugly, Gums rips off Genos' arm with his teeth, and Black Sperm assists him. He was killed instantly later on by Bang with the top of his head being ripped off.

As a high-ranked member and a Dragon-level Mysterious Being of the Monster Association, Gums is an extremely powerful being. Its abilities are very similar to Pig God's, mostly revolving around brute physical strength and eating and digesting opponents.

Immense Strength: Gums is able to use its huge mouth to chomp through things like metal and debris with ease - it managed to swallow Pig God, a hero known for eating monsters, to defeat them. It also appeared to be gaining the upper hand over Pig God in its fight with him. According to Drive Knight, Gums has a bite force capable of crushing heavy machinery.[5] Despite this, he wasn't strong enough to fully bite through Pig God's immense layers of fat.[6]

The following section contains original webcomic spoilers. Expand to see spoiler content.
He was also shown to able to rip off Genos' arm with ease, and possibly would have killed him without Silverfang's intervention.

Immense Durability: He was shown to have sustained no damage from his brief tussle with Pig God, a powerful S-Class Hero.[7]

Enhanced Stealth: Despite his bulky and pudgy appearance, Gums was able to sneak up on and take Pig God, an S-Class hero, by surprise.[8]

Elastic Jaws: Gums can stretch open its mouth to inhumanly wide proportions in order to consume large masses such as swallowing the immense Pig God in a single bite.[9]

Retrieved from "https://onepunchman.fandom.com/wiki/Gums?oldid=183065"
Community content is available under CC-BY-SA unless otherwise noted.