Bill Rogers
Groribas (グロリバース, Guroribāsu) was an alien and a general of the Dark Matter Thieves. He was killed by Saitama.[2]

Groribas had a very large and muscular body with shades of green across his shoulders and stomach. He lacked eyes on his head. In place of hands, Groribas had mouths with sharp teeth, resembling crab claws. He wore a spiked dog collar around his neck. He also had a very long and green tail with a fourth head on the end.

Groribas displayed great confidence in his battle prowess. He showed a somewhat goofy personality, not being able to decide which moves to use in a fight while heading to Saitama's location. Despite his aloof demeanor, he liked to slowly kill his enemies.[1]

When Geryuganshoop and Groribas learn of Saitama's intrusion into the ship, Groribas goes to deal with him. As he's going to Saitama's location, he wonders what special moves he will use against him.[3]

Groribas briefly appears in a futile attempt to stop Saitama from damaging the ship further. While touting his own abilities and preparing to strike down Saitama, he is beheaded by Saitama's punch.[4]

Due to his status as a Dragon-level threat, it can be assumed that he was an extremely powerful being. Although he was effortlessly killed by Saitama, Geryuganshoop stated that Groribas was their "best warrior".[5]

Immense Strength: As a Dragon-level Mysterious Being, it can be presumed that Groribas had very impressive strength. He was strong enough that he killed most of his opponents before he could display all of his techniques.

Acid Breath (アシッドブレス, Ashiddoburesu): Groribas claimed to have an acid breath that can melt anything, but this is not shown due to the speed at which he is dispatched by Saitama.

Expert Hand-to-Hand Combatant: Groribas possessed 20 techniques,[3] which he was not able to show off due to his quick death by Saitama. Given their names, it can be assumed that he preferred hand-to-hand combat. He stated he would often kill his opponents too quickly before he could display all of his techniques.[3] 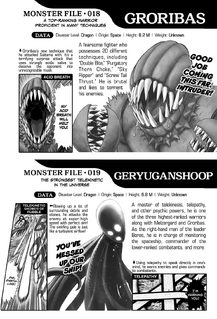