Grizzly Nyah (グリズニャー, Gurizunyā, Viz: Grizz-Meow) was a Mysterious Being that used to belong to a Hero Association staff. It was killed by Saitama.[2]

Grizzly Nyah was a giant humanoid cat-like creature who had six eyes and sharp teeth. An adult Grizzly Nyah could grow up to 20 meters. 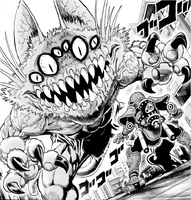 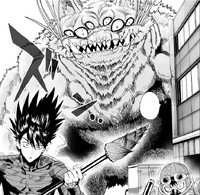 Not much is known about them, but they, like many Mysterious Beings, seemed aggressive towards humans.

A Grizzly Nyah escaped her owner and began to cause a disturbance throughout Z-City. Shortly after escaping, she gave birth to two other Grizzly Nyah. One of her children incapacitated Heavy Kong and Peach Terry. The other child fought and was eventually defeated by A-Class heroes, Lightning Genji and Stinger. The first child would later be defeated by Genos. The mother would then make an appearance after sensing the defeat of her children. Saitama would then encounter the mother when trying to save a Hero Association's handler's daughter's cat. During the encounter, the mother would be quickly killed with one punch.

The Grizzly Nyah was powerful enough to defeat several A-Class heroes, including Peach Terry and Heavy Kong. Furthermore, one of the children was able to hit Genos with enough force to knock him through a wall. They were also fast enough to keep up with Lightning Genji's speed.

Enhanced Strength: Due to its massive size, the Grizzly Nyah mother possessed enormous strength. Even a child Grizzly Nyah was capable of knocking Genos through concrete.[2]

Enhanced Durability: A child Grizzly Nyah was capable of taking a few hits from Genos.[2]

Hand-to-Hand Combatant: A Grizzly Nyah fights primarily as a hand to hand combatant. A child Grizzly Nyah is capable of defeating two of the weaker A-Class Heroes. However, some of the stronger A-Class heroes can defeat a child if they work together.[2]

Stealth (隠密性, Onmitsu-sei): A Grizzly Nyah is capable of being very silent and nearly undetectable if need be. It even took Genos a while before he detected a child Grizzly Nyah above him despite having multiple advanced sensors.[2][1]