In the original webcomic, Golden Sperm was defeated and killed by Garou.[3][4]

Golden Sperm is a large and muscular humanoid that retains his previous self's head shape. His signature element is his overpowering golden shimmer which feeds directly into his many physical powers. 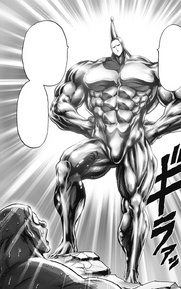 Golden Sperm retains the arrogance that Black Sperm possesses, and has no issue looking down upon beings it views as inferior. He takes pleasure in using intimidation tactics and cruelty, but remains strategic in his thinking, agreeing with Homeless Emperor when the villain suggested leaving Fuhrer Ugly alive to further their own pursuits.[5]

When Atomic Samurai is about to kill Homeless Emperor, Golden Sperm jumps out and protects him from the S-Class hero, despite previously planning on taking down Homeless Emperor as Black Sperm.[6] After having his forearm chopped off by Atomic Samurai, Golden Sperm shows great anger, declaring that he is going to make the hero pay dearly.[7] As he slowly walks towards Atomic Samurai, he also tells all the other heroes present to form a line and coldly states that he is going to kill every single one of them, one by one.[8]

Furthermore, although he is arrogant, Golden Sperm seems to think carefully before doing something, as he advises Black Sperm not to act recklessly against King and agrees with cooperating with Homeless Emperor to fight against the famous hero.[9]

In the original webcomic, after his birth, Golden Sperm was quickly shown to have little interest in the livelihoods of the other Black Sperm cells, and even suggested absorbing them as they had become obsolete.[10]

Upon being angered by Fuhrer Ugly's behavior and realizing that the heroes are largely distracted and weakened, Black Sperm merges a large number of his cells into Golden Sperm, who then attacks the fat monster for "crossing the line." Fuhrer Ugly attempts to fight back against Golden Sperm, but his acidic vomit is unable to harm the latter, who cites the anti-corrosive properties of gold as the reason why he is completely unfazed. Golden Sperm later witnesses Homeless Emperor appear and punish Fuhrer Ugly, who then leaves them out of their mercy.

Soon, Golden Sperm switches his focus on Superalloy Darkshine, who is trembling in fear due to suffering damage from Fuhrer Ugly's digestive fluids before. Golden Sperm comments about Darkshine's unworthiness for being an S-Class hero shortly before landing a punch on his face, which sends the hero flying a considerable distance towards Iaian, Atomic Samurai and Spring Mustachio's whereabouts. These three heroes are then attacked by Homeless Emperor, who sends his energy orbs raining down on them.

As Golden Sperm watches Iaian and Spring Mustachio being overwhelmed by Homeless Emperor's Extreme Carpet Bombing, Atomic Samurai finally manages to unsheathe the Sun Blade, which proceeds to possess him while simultaneously granting a massive power boost. The empowered S-Class hero saves Iaian and Spring Mustachio by dispersing a massive ball of energy that Homeless Emperor was about to attack them with. Atomic Samurai in his possessed state attempts to kill Homeless Emperor but in that moment, Golden Sperm saves him by blocking the Sun Blade with his right forearm. Golden Sperm initially wonders if the source of Atomic Samurai's power boost is monsterization, but quickly realizes that the Sun Blade is actually the source. Golden Sperm attempts to destroy the blade, but to his surprise, his right forearm ends up being sliced off instead.

Before further damage can be done, the effects of the Sun Blade wear off and Atomic Samurai regains his senses. The S-Class hero is exhausted from wielding the Sun Blade, and Evil Natural Water shows up. The now enraged Golden Sperm states that Atomic Samurai will pay a high price for cutting off his arm and also tells the remaining heroes to form a line and wait for their turn to be killed. At this moment, King appears with his King Engine rumbling, causing Golden Sperm to stop in his tracks. Together with Black Sperm, Homeless Emperor and Evil Natural Water, Golden Sperm confronts the famous hero.

Having grown paranoid and fearful of King's words and next movements, believing that the hero is looking down on him, Black Sperm is enraged and decides to merge all of his clones together in order to defeat him. Golden Sperm then combines with over 11 trillion of Black Sperm cells and becomes the ultimate fusion Platinum Sperm.

Click "show" to read the events that exist only in the original webcomic.

While the 100 cells of Black Sperm hold Tareo, the remaining 10 trillion cells combine into one superpowered body called Golden Sperm. Tatsumaki is unimpressed, but Golden Sperm surprises her with his lightning speed and quickly beats her with multiple direct blows. The 100 cell Black Sperm is amazed by Golden Sperm's strength, who tells him that he might as well absorb him too, but Black Sperm refuses. Golden Sperm is then attacked by Tatsumaki again, trying to break his neck with her psychic powers to no avail.

King suddenly reappears, calling out his Hellfire Burst Wave Motion Cannon, and catches Black Sperm by surprise. However, the attack never comes, much to his relief, and he watches in confusion as King turns and runs away. He discusses chasing him with Golden Sperm, but Golden Sperm tells him they need to stay with the hostage, Tareo. The 100 cell body doesn't respond, having been cut in half as Garou emerges from the other side. Golden Sperm is surprised that Garou is still alive, and receives a brutal blow to the face. Black Sperm's remaining cells attack Garou, though he quickly wipes them out in an instant. The single remaining cell considers hiding, while Golden Sperm grows excited and moves to challenge Garou. He engages Garou, the two moving at blistering speeds that the heroes' eyes can't even keep up with. When the dust settles Golden Sperm lays dead on the ground, with Garou victorious.

As a fusion of a mass number of cells of Black Sperm, a Mysterious Being that was already classified as a Dragon-level threat, Golden Sperm is extremely powerful. He possesses an extreme amount of raw power and speed, as demonstrated when he was capable of effortlessly defeating powerful individuals such as Fuhrer Ugly and Superalloy Darkshine,[11][12] the former being a powerful Dragon-level monster while the latter being an S-Class hero well-known for his extraordinary strength and toughness.

In the original webcomic, Sweet Mask stated that even if all of the S-Class heroes present fought Golden Sperm, it would still be a very difficult task to defeat him.[13] He easily defeated a weakened Tatsumaki and moved so fast that the present heroes could not even see him in motion.[14] Along with this, he was also able to fight against evolved Garou on equal footing, even if it was only for a few moments.[15]

Immense Strength: Golden Sperm possesses top tier physical strength; far surpassing the capabilities of his individual cells. He was able to completely dominate Fuhrer Ugly, a powerful Dragon-level threat.[16] Furthermore, Golden Sperm's strength is so overwhelming that he was capable of knocking out Superalloy Darkshine, a very formidable S-Class hero, and sending him a fair distance away, with only a single punch.[17]

Immense Speed and Reflexes: Golden Sperm is amazingly fast, as demonstrated when he was easily able to punch Fuhrer Ugly faster than the monster could react.[18] Furthermore, he was even fast enough to quickly appear in front of Homeless Emperor to defend the latter from Atomic Samurai, despite the distance between them being almost zero.[19]

Immense Durability: Along with his immense strength, Golden Sperm also possesses amazing toughness. He was capable of taking slashes from Atomic Samurai, whose strength was further heightened by the legendary Sun Blade, while only having his right forearm slightly penetrated against the hero's blade momentarily before it was completely cut off soon afterwards.[20]

Immense Endurance: Even after getting his forearm cut off by Atomic Samurai, Golden Sperm showed no signs of pain and was prepared to continue fighting regardless of the heavy bleeding.[21]

Acid Resistance: Due to having the anti-corrosive properties of gold, Golden Sperm is extremely resistant to acid. He remained completely unfazed when Fuhrer Ugly unleashed a blast of acidic vomit directly in his face, which did no damage whatsoever (where it had previously melted straight through Darkshine's skin).[22]

Fusion: Golden Sperm could fuse with all other Black Sperm cells to become the ultimate fusion Platinum Sperm.

Psychic Resistance: Golden Sperm is able to very effectively resist an injured Tatsumaki's psychic attacks with apparent very little effort.[23] However, it has been confirmed that if she was in perfect condition, he could lose.[24]