Golden Ball is a tall man with blonde hair and a brown goatee. He wears baggy pants, a hoodie underneath a Letterman's jacket, and a white beanie. His jacket has "Golden Ball" printed on its back and on the left breast, and the right breast of his jacket has the words "It's not Kintama, its Golden Ball," a reference to a euphemism of testicles. 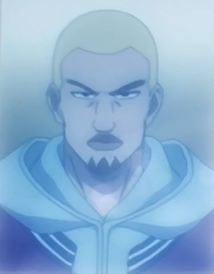 Golden Ball without his cap

Golden Ball is a rather confident man who believes he does not need to prepare for a fight. However, he has some experience with hunting and pretends to be drunk while Garou calls him out to the alleyway for a fight, only dropping his cover once he had attacked Garou by surprise.

Golden Ball, along with Spring Mustachio, is dispatched to Z-City to investigate the rumors of an intensely strong monster.[2] After not finding anything for a while, the two heroes catch a glimpse of a Mysterious Being and give chase.[3] The creature turns out to be Kombu Infinity. Golden Ball immediately pulls out his weapon and fires a volley of his "Shape Memory Gold Balls" at Kombu Infinity who casually swipes away the attack to the side. While that was happening, Kombu Infinity was sneaking one of his tentacles through the street drain, and from behind, wrapped it around Golden Ball's leg. He pulls him down the road and throws him into the side of a building, rendering him unconscious and unable to fight.[4] Golden Ball was later picked up by the reinforcements and taken to the hospital.[5] Some time after the event, he received a promotion to rank 26.[1]

Golden Ball is drinking in a bar when Garou approaches him and challenges him to a fight. Golden Ball accepts, feigning drunkenness, and the two head to a parking lot to fight. His act dupes Garou into lowering his guard, and, in the alleyway on the way to the lot, he fires a shot that Garou barely manages to dodge. He launches a second shot, but Garou dodges it as well. Golden Ball realizes that Garou is predicting the path of the projectiles by reading his hand movements and fires a shot that ricochets and pierces Garou's leg.[6]

Golden Ball, believing he has the advantage now, follows up with Golden Breakout. However, Garou effortlessly dodges all of them, thus refuting Golden Ball's initial thought that Garou used Golden Ball's hand movements to dodge his bullets. In a final effort, Golden Ball fires one more shot directly at Garou. Unfortunately, Garou was able to deflect and destroy it and then destroys all of the other bullets. Before Garou can attack Golden Ball, Spring Mustachio appears, and while he is able to put Garou on the defensive for a period of time, is quickly defeated. Golden Ball warns Garou of his cockiness, only to hear Garou willfully disregard it until his defeat at the hands of a hero.[7]

Golden Ball was among the many heroes summoned by McCoy to combat the monster that was devastating the Z-City police station. He arrives at the scene late, after Saitama has already killed the monster.[8]

As an A-Class hero, Golden Ball is a skilled and powerful fighter. The Hero Association considered him powerful enough to send to investigate mysteries of Z city along with Spring Mustachio. He was the first A-Class hero to harm Garou, something 5 of the top 10 in A-Class couldn't do, forcing Garou to use the Water Stream Rock Smashing Fist, something Garou only used on an S-Class hero before.

Enhanced Strength: Golden Ball demonstrates the strength needed to operate a slingshot that can pierce steel.

Enhanced Speed: As an A-class hero, Golden Ball is quite fast. He was able to dash past a block with a few leaps.[9]

Enhanced Senses: Golden Ball's senses are sharp enough to accurately pinpoint the angles necessary to ricochet his golden balls and was able to hit Garou's leg, despite being intoxicated, and would've likely hit Garou's vitals had he not been drinking.

Expert Marksman: Golden Ball has an incredible aptitude in sharpshooting. Golden Ball can launch bullets that bounce off nearby surfaces towards a target to prevent the opponent from figuring out where the bullet is heading. His propensity for long-range combat also pairs well with his partner Spring Mustachio's skill in short-range combat.

Slingshot: Golden Ball carries a black, metallic slingshot. The slingshot bands can stretch the length of his arm. Attached to the base of the weapon is a laser pointer, which helps guide his shots. Golden Ball uses the slingshot to fire Shape Memory Gold Bullets at high speeds.[10]