Edit
watch 00:58
Who is God in One-Punch Man?
Do you like this video?
Play Sound

An enigmatic entity referred to as God (神, Kami) by Homeless Emperor,[2] Psykos,[3] and Blast.[4]

In its first appearance, God looked like a swirling gust of wind with scribbles that outline a person.[2] God is described by Psykos as reminiscent of Jupiter's surface with countless spiraling spots overlapping over one another.[5]

When Saitama, Flashy Flash, and Manako peered through a hole while they were underground, God appeared to look like an extremely massive humanoid entity, so much so that it completely dwarfed the hole they peered into.[6] Though none of them could see it.[7]

When making its second appearance in Homeless Emperor's vision, it looked like a giant humanoid figure made entirely out of flesh and bones with no face. It is unknown whether its physical form is the same, if it even has one, or if they were just imaginary projections in Homeless Emperor's mind.

When making an appearance in a vision to Tatsumaki and Garou, God impersonated Blast's appearance as he was when Blast first met Tatsumaki and Bang for Garou. Though the facade quickly fell away to display his true faceless appearance once the trick failed to work for either of them. 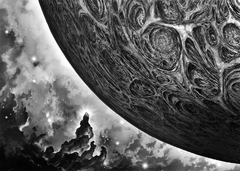 God as seen by Psykos and Orochi

God's appearance through the hole peered by Saitama, Flashy Flash and Manako 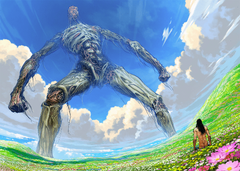 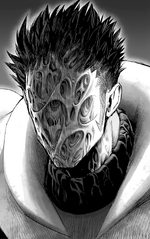 God gave Homeless Emperor its powers[2] and enhanced the abilities of Orochi and Psykos,[8] although its motives remain unknown. God apparently agrees with Homeless Emperor's belief that humanity is a worthless plague on an otherwise grand and beautiful planet.[2]

It also has the tendency to test whether people are worthy to receive its power or not through a Mysterious Cube. If not, they will face "forfeiture", presumably killing them.[9]

Apparently, God tends to keep people from being aware of its existence or knowing about it if possible. This is seen when it mercilessly takes away Homeless Emperor's life and powers before the latter can actually answer any inquiry from Zombieman.[10] God is also an opportunist, as it attempted to lure Tatsumaki and Garou into accepting its deal by using the guise of Blast and Bang, respectively. Though it quickly left when Tatsumaki realized it is not the real Blast.

While God claims that it does not like humans, it apparently does not care for the life on Earth as well. This was shown as according to Blast, Garou in his Cosmic Fear Mode was still somewhat being manipulated by God, and that every one of the Hero Hunter's attacks would emit deadly energy that could endanger the life of all living things in the planet, contradicting his hero hunting agenda.

God is first seen in a flashback as Homeless Emperor recounts his backstory to Zombieman. He describes how he stumbled upon it in the park one day. It compliments Homeless Emperor for his "correct" ideology but states the human has no reason to die. Instead, it gave him the ability to summon and control energy spheres at will, telling the newly-empowered human he should know what to do with this power and leaving.

During the fight between Orochi and Saitama deep underground, Orochi reveals a tablet he discovered in an ancient shrine, which depicted Orochi and stated that a worthy sacrifice was needed in order to resurrect "God", leading Orochi to believe this was referring to him. Soon after, the hero easily defeats Orochi with a single punch. Before the ancient cave collapses, his remnants crawl to the tablet while the full picture of the actual "God" appears in the mural and is unseen by the Monster King.

God is later seen in another flashback as Psykos recounts how she obtained the source of her enhanced power. She describes it as a huge mass of brain cells with a similar appearance to that of Jupiter's surface.

God later communicates to Saitama, Flashy Flash, and Manako after they touch a cube. It is surprised that there are three of them, and then tells them to put their hands on the cube in order to either gain powers if they are worthy or face "forfeiture" if they are not. The three of them make no decision as Blast suddenly appears and confiscates the cube himself. Before the hero teleports the cube to an unknown location, God makes a final shocked comment as to the presence of Blast.

After Homeless Emperor's defeat, when Zombieman begins inquiring more about the entity Homeless Emperor was speaking of, he suddenly sees a colossal figure appear and stand on top of the Moon. The entity then appears in his mind, only with its appearance being changed into a colossal giant of flesh and fractured bones. It then mercilessly takes away Homeless Emperor's light powers and his life, causing his body to disintegrate in the process.[10]

Later on, when Tatsumaki was down and near unconscious, God attempts to lure her into taking its powers, using Blast's own form to do so. However; it fails as Tatsumaki realizes that it is not the real Blast and simply asks it regarding its true identity. God then simply leaves in irritation.

During Garou's fight with Saitama, Garou's attack manages to weaken the dimensional seal keeping God at bay. In the sky, several large clouds formed, and through the clouds, God's feet appeared and began walking. As Garou was defeated by Saitama, God communicates with him through telepathy and offers him the power to defeat the Caped Baldy. While it impersonates Bang's appearance and offers Garou its hand, despite Garou realising that somebody has turned into his former master and just slapping its hand away, the mere fact of him "touching" the hand of "God" is enough for him to be influenced by the mysterious entity. Before leaving and vanishing from Garou's sight, "God" states that it will make him its "avatar", with the Hero Hunter afterward nearly losing his consciousness from the intense flow of power through his entire body.

Little is known about the full extent of God's abilities. The appearance of one of God's Mysterious Cubes was enough for the top-ranked S-Class hero, Blast, to show up.[12] Since the hero is said to only take action when humanity faces a true crisis,[13] it can be presumed that God is an extremely dangerous threat.

Power Bestowal: The enigmatic entity is capable of granting supernatural powers to individuals. It gave Homeless Emperor the incredible power of summoning energy spheres similar to little suns that explode on contact and create huge and flaming bursts.[2] It also gave Psykos and Orochi a massive boost in power during their fusion, enough to slice through the Earth's surface in a single attack, launching a continental landmass over a considerable distance above the ground in the process.[14] Additionally, God can grant powers to individuals who place their hands on one of the Mysterious Cubes and then state their wishes. However, if they are not worthy to be bestowed upon, they will face "forfeiture".[15] It is also capable of taking back the granted powers along with the lives of the wielders.[10]

Mind Incursion: God was able to get inside Homeless Emperor's mind and communicate with him. It was also able to freely change the appearance of its projection in Homeless Emperor's mind.[10] Later, it seemingly used a similar ability on Tatsumaki, changing its appearance to that of Blast and trying to lure her into taking its powers, but failed.[16] Its next attempt on Garou by imposing as Bang, on the contrary, was a success. Despite Garou having managed to not fully become God's pawn and retained his sense of self, the mysterious figure could still mentally influence Garou and make him significantly more cruel than before.

Dimensional Manipulation: While being trapped in another dimension, God can still communicate with others on Earth, as seen when it appeared before Tatsumaki and offered her powers.[18] Blast also stated that God was close to breaking through a dimensional barrier and his feet were shown walking coming out of dimensional rifts.[19] Even when not fully released into the physical world, God can cast images of itself and conversely hide itself from those it does not wish to see it, as the heroes on scene only saw the dimensional rifts as storms without seeing feet extending from them.[20]