Episode 13
Giant Crow (巨大黒烏, Kyodai Kokū) was a Mysterious Being sighted flying above M-City. It was killed by Saitama.[3]

Giant Crow lived up to its name with its main body being larger than an apartment tower. Its feathers were black while the eyes glowed red. It was equipped with large sharp teeth in its beak. 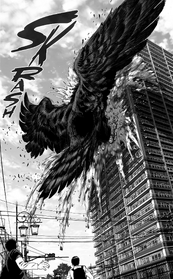 The Giant Crow first appears in M-City, causing an emergency evacuation, but contradictory also warning the inhabitants not to step out of their house. It crashes into King's Apartment but is stopped by Saitama. After letting out a loud screech, its head is obliterated by Saitama. It was later seen laying headless on the ground with its wings spread out.[4]

As a Demon-level Mysterious Being, Giant Crow was naturally a rather powerful monster. Although its strength wasn't actually shown due to how quickly it was defeated, it had several unique abilities such as poisonous fangs and absorbing its enemies' powers.[1] However, as expected, it was effortlessly killed by Saitama.[5] Additionally, it has been stated by ONE that Puri-Puri Prisoner, an S-Class hero, could have defeated the Giant Crow.[6]

Flight: Giant Crow had the ability to fly using its feathered wings.

Enhanced Strength: As a Demon-level threat and an enormous monster, Giant Crow possessed great physical strength. It was able to smash into a building with little to no injury.[7]

Digestive Assimilation: Giant Crow could absorb the enemy's strength by eating them.[1]