Brian Beacock
Geryuganshoop (ゲリュガンシュプ, Geryuganshupu) was an alien, a general of the Dark Matter Thieves, and the right-hand man of Boros.[1] It was killed by Saitama.[2]

Geryuganshoop's body was dark blue covered with translucent skin, which turned rainbow-colored when it was in battle. It had no arms, legs, or torso, but rather a multitude of tentacle-like appendages connected to its neck, much like an octopus. Its head was oval and had two eyes and a mouth.

Geryuganshoop was loyal to Boros; willing to throw itself in danger to defend him from intruders. At the same time, it recognized its own rank and handed out orders to all members of the Dark Matter Thieves from a control room, namely the various workers on board the ship. It was calculative in most circumstances but could lose its cool if the ship and those within it were put in danger.

In regard to its prowess in battle, Geryuganshoop was somewhat arrogant and believed that there was no other psychic in the entire universe that surpassed it in skill. As such, it thought of itself as much more powerful than it truly was; attempting to handle even an intruder that has wiped out a large portion of the ship and its workers on his own.

Geryuganshoop is first seen monitoring the damage done to the ship. After Boros approaches it, inquiring what is happening on the ship, it explains the situation and is ordered to send Groribas after Saitama. However; it then tells its lord that Groribas had already been killed and that Melzargard was tied up on the ground.[3]

Geryuganshoop contacts Melzargard with the orders to return to the ship and attack the intruder. However, Melzargard is occupied in battle and requests support fire from the ship.[4] It contacts the gunner afterward, while also telepathically contacting Saitama, warning him not to go further into the ship. Saitama blatantly disregards the order and does the opposite, charging into Boros' throne room.[5]

Geryuganshoop attacks Saitama from behind with a barrage of rubble from the destroyed door, claiming that as the top telekinetic in the universe, no one can survive its attacks.[6] It sends a large amount of rubble at Saitama, believing itself to have won, but is surprised to see Saitama standing unharmed. Saitama remarks that throwing rocks around with telekinesis is a waste of superpowers since anyone can do it.[7] He then demonstrates by throwing a small rock at Geryuganshoop's head, splitting it in half.[8]

Given its status as a Dragon-level mysterious being, Geryuganshoop was a very mighty foe with vast psychic powers. Geryuganshoop was stated to be one of the most powerful beings in the group of invaders, alongside Groribas and Melzargard. When it fought Saitama, it wasn't scared of him, despite Saitama having defeated Groribas, showing its confidence in its skills which, while formidable, were not nearly enough to defeat the hero.

Enhanced Durability: Geryuganshoop was able to remain undamaged from being buried under a large door.[9]

Psychokinesis: Geryuganshoop possessed the ability to levitate and hurl matter using its mind. It was an immensely powerful psychic with a very high psychic output. Geryuganshoop was able to eliminate the friction between objects and air, a feat above the level of even Tatsumaki. As a result, the rocks launched by Geryuganshoop would fly at sub-light speed without being evaporated.[10]

Telepathy (テレパシー, Terepashī): Geryuganshoop used telepathy to contact Saitama and tried to stop his rampage through the ship in an attempt to peacefully guide him to an exit. In addition, it used telepathy to communicate with its comrades and underlings.[1]

Master Psychic Combatant: Geryuganshoop used its environment to its advantage, launching rocks at its opponents with its psychokinesis. It wielded the ability to eliminate friction between the air and the objects it threw, which allowed it to throw objects at speeds approaching the speed of light without unintended consequences. It also claimed to be the top psychic combatant in the universe. 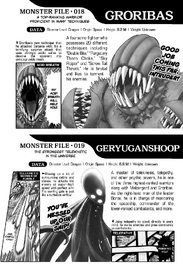