Genji is a rather short and youthful man with black hair and clear eyes. He wears a protective armor-like suit, with some tubes going in and out, marked with a sign resembling the radioactive logo. He also has a cap, with goggles and a mouth mask resembling that of an aviator's.

As the higher-ups of the Hero Association discuss the status on the cities, Lightning Genji was mentioned as a superhero in charge of D-City. His report on the city was that there is still reconstruction due to the incident caused by Marugori.[2]

Lightning Genji encounters Maiko Plasma and Electric Catfish Man in D-City.[3] He is later defeated by them.

Lightning Genji was among the many heroes summoned by McCoy to combat the monster that was devastating the Z-City police station. He arrives at the scene late, after Saitama has already killed the monster.[5]

Being an A-Class hero, Lightning Genji is a skilled and powerful individual. As he is in charge of a city, the Hero Association trust in his abilities. He managed to climb into the upper ranks of A-Class in only a year and is trusted by the Hero Association to go on secret missions. Together, he and Stinger managed to heavily injure a child Grizzly Nyah, who is a Disaster Level Demon monster. This is rather impressive considering it usually takes an S-Class hero to take on a Demon-level threat.

Enhanced Speed: Lightning Genji has been shown to be able to move very fast in battle as he was able to dodge a Grizzly Nyah's attack and climb the creature's arm.

Enhanced Strength: Attacking with both stun rods at once, Lightning Genji managed to harm a child Grizzly Nyah and break some of its fangs.

Enhanced Agility: Lightning Genji can perform impressive acrobatics to retreat to a safe position and kill his own speed.

Dual-wield Stun Rods Style (スタンバトン二刀流, Sutanbaton Nitōryū): As its name suggests, it is a fighting style involving two stun rods. Lightning Genji was able to effectively use his rods to fight a child Grizzly Nyah. He is also skilled at wielding them like normal sticks in combat, holding his own against two Tiger Level monsters at the same time.

Stun Rods: Lightning Genji is seen to wield two combat sticks that are charged with electricity. Both sticks are fairly short. 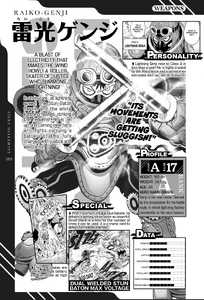