Garou vs. Bang is the battle between Garou and his former master, and the S-Class hero Silver Fang.

After Garou arrives on the surface of Z-City following an extreme physical transformation, he immediately confronts and duels Bomb, who calls out to Bang. Bomb fights with Garou in order to buy time, but is overcome by his brother's former disciple and defeated. Just as Bomb is brought down, Bang arrives.

Bang comments on Garou's sorry appearance in his monsterized state and asserts that he will take Garou down with his own hands. Pledging to go all out one last time, Bang beckons Garou forward, and they clash while Bomb looks on. Bang's Water Stream Rock Smashing Fist and Garou's are completely on par, with master and disciple alike dodging and reflecting every blow. Bang, who used his Awakening Breath technique at the start of the fight, notices that Garou has mastered it as well, with only a glance. Bang manages to kick Garou away and immediately rushes towards him, proceeding to send him into the air with a tackle. As Bang quickly jumps up and is about to slam him into the ground, the Hero Hunter counters him by deflecting the blow and sending him straight into the ground, causing a bleeding on Bang's head.

Realizing just how much more skilled of a fighter Garou has become since his days as a disciple, Bang backhandedly tells Garou that he is more worth teaching now than ever before. Garou merely growls and the two continue to fight.

Garou and Bang simultaneously land a hit on each other that knocks both of them back. Garou then takes the stance of Exploding Heart Release Fist, which surprises Bang and Bomb as that is the martial art style Bang primarily used before developing his Water Stream Rock Smashing Fist. Utilizing his new fighting style, Garou proves able to overwhelm his former master and pushes him back, significantly wounding him. Bang refuses to give up, rushing towards Garou.

Their fight continues with Bang being the one who is seemingly at a disadvantage but briefly gaining the upper hand by using grappling and kicking Garou away. Garou eventually showcases his Roaring Aura Sky Ripping Fist, to the shock of his former master, who then struggles to defend against his onslaught, since if he takes even a direct hit from Garou now, his bones will break into pieces due to the powerful shockwaves coursing through body. Ultimately, they both simultaneously attempt to land a final hit on each other, with Bang successfully punching him in the face, drawing a noticeable amount of blood from him and cracking his face, and Garou simply grazing Bang's chest but the shockwave from his blow is still strong enough to seemingly wreak Bang's body, prompting his former master to fall defeated. 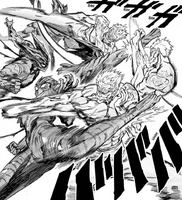 Garou deflecting Bang's blow and spinning him in the air

Simultaneously landing a hit on each other 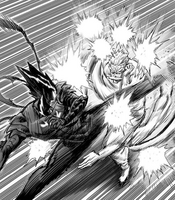 Garou and Bang about to land a final attack