Sense
Game-Berus (ガメベロス, Gameberosu; Viz: GameBeros) was a Mysterious Being who attacked the first Hero Costume Contest. It was killed by Saitama.[1]

Game-Berus was a giant sentient turtle-like creature who had three heads and a shell, characterised by a muddy green-ish color. It could stand on its hind legs. 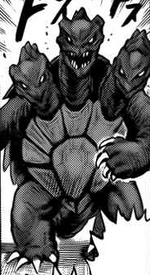 Game-Berus was originally a turtle. When its owner flushed it down the toilet, into the sewers, it transformed into a monster after bathing in sewage.

Not much is known about it, but it seemed determined to drown humans in sewer water.

Game-Berus interrupts a hero costume contest before Saitama can get a final verdict. After easily defeating B-Class and C-Class heroes, it declares that it will drown humans in sewer water. It is then defeated by a punch from Saitama after charging at the judges.

As a Demon-level threat, Game-Berus was quite powerful. A group of C and B-Class heroes were unable to do anything against it and the S-Class hero Genos even praised the monster after Saitama killed it, claiming Game-Berus wasn't weak.

Enhanced Durability: Game-Berus had a very tough shell and skin, as the B-Class hero Darkness Blade was not able to deal any damage to it.

Enhanced Strength: Game-Berus had enough strength to effortlessly smack aside various C and B-Class heroes, including Darkness Blade whose armor was easily broken with a single hit.

Spherical Form: Game-Berus could roll into a ball to attack others with greater speed and power than his regular strikes.