One-Punch Man Wiki
Register
Don't have an account?
Sign In
Advertisement
in: Articles in need of citations, Characters, Mysterious Beings,
and 10 more
English

Gale Wind is a tall man with a muscular physique and long, wavy light-colored hair and has a marking under his right eye.

His attire consists of a tight-fitting shirt, white hakama pants with black trimming, white sash and black arm warmers. Gale Wind also has metal bands around his biceps and neck.

When he transforms into a monster, his teeth become sharp, his skin gains black markings and his eyes begin to twist like a lizard. His hair stands on end and his scalp sprouts arachnid-like limbs.

After he's sliced in half by Flashy Flash, revived by Phoenix Man and resuscitated by Child Emperor's Gigavolt Smash he has noticeable horizontal scars across his chest and arms. 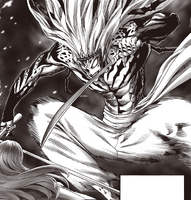 Gale Wind after transforming into his monster form.

Gale Wind is shown to be quite sadistic, but playful and polite toward his opponent. He is a strong believer in the superiority of monsters over humans, so he chose to join the Monster Association to rule the world. He holds a grudge against Flashy Flash for causing the 44th graduation class incident known as "The End”, calling him a criminal. Despite this, he does view Flashy Flash as worth the kill, and openly admired Flashy Flash's impressive speed.

Gale Wind is also very prideful and arrogant as when inviting Sonic to join the Monster Association. Gale Wind stated that Sonic would make a good foot soldier to increase the chances of killing Flashy Flash probably because Sonic is from the 44th class of their ninja village that is known as the end class.

Gale Wind is largely disinterested in running the Monster Association, only using them as a means to an end. He dismisses the heroes as inconsequential and believes only those who learned the same ninja techniques can compete with him.

Gale Wind, along with Hellfire Flame, were the top two graduates of the 37th Graduation Class known as the "Golden".[5] At some recent point in time Gale Wind became a monster.

Gale Wind and Hellfire Flame attack Speed-o'-Sound Sonic in a forest as a form of skinship and introduce themselves as Sonic's seniors from their Ninja Village. After some discussion, Gale Wind and Hellfire Flame invite Sonic to join the Monster Association to further their goal to become rulers of the world. Gale Wind reveals their plan to attack the Hero Association, more specifically killing Flashy Flash and asks Sonic's help to distract the other heroes. When Sonic refuses, Gale Wind transforms into a monster and demonstrates his speed, shocking Sonic, and explains the process of the transformation. They then offer a Monster Cell to Sonic and leave.[6]

Gale Wind and Hellfire Flame are present at Gyoro Gyoro's speech. During Garou's appearance in the Monster Association meeting, Gale Wind and Hellfire Flame express their doubt about Garou's position as a potential executive member and replacement for Gouketsu and Elder Centipede. However, they immediately push aside that matter and focus on how to they can kill Flashy Flash. Furthermore, they also wonder why Sonic still hasn't joined them and assume that he is not compatible with the Monster Cell.[7]

Gale Wind and Hellfire Flame are seen training together, preparing for the upcoming battle against the Hero Association. They discuss the heroes and conclude that only Flashy Flash poses a threat as their speed will allow them to defeat machinery and espers.[8]

Gale Wind and Hellfire Flame later find Flashy Flash in the Monster Association base. They compliment him on his speed before they do battle. During the fight, Flashy Flash destroys the corridor, and Gale Wind rotates one of the blocks they were standing on in order to do battle in a more open area. As they do battle, Gale Wind explains that they will eliminate all foes who are possibly a threat, and explains the purpose of going after Flashy Flash was because he viewed other ninjutsu masters as rather troubling. But then, Flashy Flash sprints off at speeds neither monsters could track, and he then tells them to unleash their full power as monsters.[9] Eventually, they are both forced to reveal their monster forms after realizing they are outclassed in their human forms. Flashy Flash's eyes widen in surprise at their increased speeds, and is barely able to block both of their attacks, revealing their disaster level as Dragon.[10]

They continue to fight, and the two monsters are able to pressure Flashy Flash, managing to injure him severely, but once the hero became serious, he strikes both of them with a series of kicks, and then slices both of them in half, ending their lives.[11]

After Phoenix Man's defeat, Gale Wind and Hellfire Flame find themselves both very alive and conscious. They have no recollection of being zombies and wonder where Flashy Flash went. They notice Child Emperor nearby and decide to use him to lure Flash back out, but Saitama punches them both to incapacitate them.

Gale Wind comes from the same ninja village as Sonic and is a graduated ninja, so he is a very strong and skilled warrior. As Gale Wind graduated among the "Golden" 37th class of the village, he is shown to be more powerful than Sonic and thus could qualify for the rank of S-Class in the Hero Association if he didn't become a monster. Gale Wind and Hellfire Flame display excellent teamwork skills and cover for each other in battle. Although Gale Wind is classified as Demon in his human form, his monster form takes on the classification of Dragon, drastically increasing his already immense speed and pressuring the likes of Flashy Flash. He was also a cadre candidate.[citation needed]

Immense Speed and Reflexes: Much like Speed-o'-Sound Sonic, Gale Wind is shown to have superhuman speed and reflexes, as he demonstrates his speed to the latter, who could not even see him. Alongside Hellfire Flame, Gale Wind was able to surround and strike Sonic in an incredibly fast barrage.[13] In his monster form, he moved so fast that Sonic wasn't even able to register his movements.[14] Gale Wind was also able to compete with Flashy Flash, an S-Class hero well-known for his extraordinary speed, and push him to take him seriously. Upon transforming, Gale Wind's speed increased drastically, pressuring Flashy Flash enough that the hero widened his eyes in surprise, forcing him to fight seriously for the rest of their fight.[15] Flashy Flash himself even commended Gale Wind on his speed, stating that the other S-Class heroes would have had difficulty dealing with him and that he was the only one who could have handled Gale Wind himself.[16]

Immense Strength: Gale Wind is capable of destroying concrete with minimal effort. Additionally, during his fight with Flashy Flash, the shockwaves produced by their battle was enough to fracture the rocks around them to the point that the entire ravine is destroyed after their battle.[17]

Immense Durability: Gale Wind appears to be quite durable, as he managed to withstand Brave Giant's Gigavolt Smash that vaporized the bodies of Subterranean People.[18] He was also able to take a barrage of kicks from Flashy Flash, a very powerful S-Class hero, while sustaining seemingly little damage, only being defeated by the hero's ultimate technique.[19]

Transformation: Gale Wind can change into his monster form and revert back to his human form freely. According to his partner, Hellfire Flame, he achieved this through ninjutsu training.[20] However, Flashy Flash noted that they still weren't able to hold back their true power due to them only becoming monsters recently, showing that he and Hellfire Flame don't have complete control over their transformations.[21]

Master Ninja: As a graduate of the ninja village that Sonic hails from, Gale Wind is no doubt a skilled and powerful warrior in the art of ninjutsu. Since he is of the 37th class which is considered the "Golden Class" that consists of the best the village has ever produced, Gale Wind is perhaps among their greatest, similar to Hellfire Flame.

Longevity: Like any human who had eaten a monster cell, Gale Wind gained a longer life span.[25]