G5 (G5, Gī Go) was a Machine God battle robot created by The Organization[2] and was a member of the Monster Association. It was destroyed by Genos.[3]

In its initial form, G5 was a large cybernetic robot that bore a resemblance to a samurai. It wore shiny metallic armor with large shoulder-pads and spiked claws on its forearms. Its face was covered by a mask with a slit that revealed a single glowing eye in the center. It had a helmet with accessories shaped like spikes and a crescent moon. It had marking resembling 'X=' running down his shoulder pads and body.

G5's true form was a smaller robot with black plating and rounder features. It had a dome-shaped head, which merged with his chest structure, with a slit for eyes. The body had huge shoulders, visible mechanical joints, and four digits on its hands. 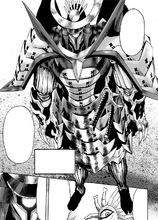 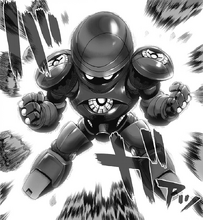 G5 had a straightforward yet secretive personality. It only spoke when it had a question or when the situation was appropriate. It appeared to mind its own business unless it wanted to add its thoughts that would be beneficial to the situation.

As a robot, it thought rationally and not impulsively. It offered the idea of using Narinki's mercenary group as an advantage for the Monster Association instead of killing them.

It seemed to have some intolerance towards some of the monsters. It questioned Gyoro Gyoro if monsters could kill one another, focusing on Royal Ripper's murderous attitude towards his supposed allies.

It also seemed to be very prideful and confident, as it believed it could defeat Atomic Samurai after copying the swordmaster's techniques.

As the Monster Association is deciding what to do with the mercenaries, G5 steps in and convinces Gyoro Gyoro to use them as their fodder, because of their special battle suits. Gyoro Gyoro agrees and Do-S makes them her love slaves.

He encounters Royal Ripper and The Great Food Tub as they are arguing over Tareo, promptly grabbing a nearby monster to throw in Great Food Tub's mouth in order to quench his hunger; Royal Ripper notices he is carrying something, and G5 explains that he "collects these as a personal hobby of his". The object in question turns out to be the head of the Metal Knight combat unit that followed Elder Centipede on his way back to the monster's hideout; G5 says he kept it because it is "a precious sample" he wants to dismantle and analyze thoroughly.[4]

Having managed to defeat Underdog Cerberus, G5 comes across Atomic Samurai. G5 fares better than the previous monsters who fought Atomic Samurai, and he exchanges several parries. In the end, however, Atomic Samurai is the superior swordsman, and G5 is cut apart by the hero's Atomic Slash. However, the robot inside G5's core manages to escape.

G5 next reappears when it shoots off Sekingar's hand with a laser blast to stop him from calling the Hero Association. Its real body emerges from its damaged shell and jumps at Sekingar, but it is destroyed by Genos who suddenly appears and stomps on it.[7]

As a Demon-level threat and a "machine god", much like G4, it can be assumed that G5 was a powerful Mysterious Being. He is an upgraded version of his predecessor and thus significantly stronger than it.[8] Additionally, despite only being a Demon-level monster, it's design was advanced enough to remain unaffected by Child Emperor's technology, and the hero went so far as to say that it would be a time-consuming effort to defeat him.[9] When fighting against Atomic Samurai, the hero complimented his skills. However, he was still not strong enough to manage against Atomic Samurai's Atomic Slash, with only his core surviving.[10]

Immense Strength: As a Demon-level machine, G5 naturally has impressive strength. He was able to destroy Child Emperor's device with a single swing and was strong enough to defeat Mad Dog Cerberus without receiving any noticeable damage. In his fight with Atomic Samurai, his swings were strong enough to match Atomic Samurai's, impressing the hero.

Immense Speed and Reflexes: G5 has quick reactions as he was able to rapidly extend his arm to grab a nearby monster and throw it at the Great Food Tub's mouth as a substitute meal. He could briefly keep up with Atomic Samurai in a sword duel and was able to escape from him once Atomic Samurai destroyed his external body.

Immense Durability: G5 was able to completely negate the effects of a trap device specifically made by Child Emperor to shut down machines. He was able to defeat Mad Dog Cerberus, one of Child Emperor's most powerful machines, without receiving any noticeable damage. His exterior was obliterated by Atomic Samurai's Atomic Slash, but his interior body remained unharmed.

Technique Mimicry: G5 analyzes his opponent's fighting style and copies their abilities, expanding upon them and improving them. This ability is complemented with his double-jointed limbs, allowing him to perform techniques that usually wouldn't be possible due to the limited range of regular limbs.

Double-Jointed Limbs: G5 has an additional range of motion from his flexible limbs which allows for unconventional angles of attack with his sword. He can also extend his arms several meters.

Simulation and Prediction: G5 can model an opponent's attack and simulate an outcome from the data. However, his simulations can be wrong if his opponent is concealing their true power, as seen with Atomic Samurai.

Laser Beams: His core can shoot laser beams as a last resort. He attempted to execute Atomic Samurai with a laser beam, but the hero parried the beam with his sword.

Expert Swordsman: While his actual combat prowess is currently unknown, G5 is likely skilled at sword fighting based on it possessing a pair of katanas. He can also copy the fighting styles of others, as was seen with Atomic Samurai. He also stated that he can improve the techniques that he has copied but was still defeated by the hero, so this was likely a boast.

Retrieved from "https://onepunchman.fandom.com/wiki/G5?oldid=181371"
Community content is available under CC-BY-SA unless otherwise noted.