G4 (G4, Gī Fō) was a Machine God battle robot created by The Organization.[3] It was destroyed by Genos.[4]

G4 was a very large and chunky humanoid robot. Its gear was lavishly decorated with shiny ornaments and plating, and it even wore a royal fur cape and a crown. G4's true form was a smaller robot with black plating and rounder features. 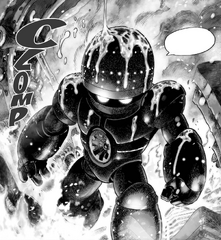 G4's true form in the manga

G4 was a robot, so it had no qualms about attacking King, even with the hero's reputation as the strongest man on Earth.[1]

G4 appears in M-City to confront King. The nearby pedestrians shriek as they spot the "monster" presumably flying by before smash-landing in front of King, causing a tremor and cracking the pavement. While looking down on the target, it introduces itself as G4; a "machine god" created by The Organization. Scanning and confirming the identity of the target, G4 recognizes him as the strongest hero King and states that it has come to eliminate him. Someone notifies King's presence to the nearby pedestrians, making them cheer out his name and telling him to get rid of the thing. King questions its affiliation and informs it of his formidable status, to which G4 quickly disregards. The disc on its back folds into a huge sword and is drawn out and pointed at an apathetic King, dauntingly restating that it was here to kill him.[5]

G4 continues by informing that this was a performance test for its battle AI, and it would serve no purpose if it were to kill him by surprise. It then begins taunting King to fight with all he's got. After learning of King's inability to fight at full potential with a full bladder, G4 agrees on the suggestion to let him use a toilet first. G4 warns King that if he does not return within ten minutes, ten people will be killed every minute and that the town will be history.[6]

After having waited for some time, G4 does indeed initiate his attack on the civilians, but Genos interferes and breaks his sword in time. Genos resolves to fight G4 alone in order to get to the top ten of the S-Class. During the battle, G4 stomps on Genos, who punches through his foot and punches him back. G4 activates the thrusters on his back, returning to an upright position as he proceeds to face off against Genos again.[7]

Eventually, G4 appears to be incinerated from the inside out by Genos, who produces a hole in his armor and then floods it with a destructive blast. However, the armor falls away to reveal instead a smaller robot, the true form of G4, who uses lasers to fight Genos.[8] G4 eventually manages to cut off one of Genos' arms with its lasers. However, Genos uses a fire extinguisher and unseals the end of a nearby pipe in order to produce a cover around G4. G4 attempts to fire its lasers but finds it impossible to focus his lasers with the cloud of fire extinguishing solution draped about him. Genos then restrains G4 with a cable from his severed right arm and engages him in hand to hand combat.[9] It is afterward revealed that Genos had defeated and shut down G4 and brought G4's parts to Dr. Kuseno in order to improve his arsenal.[10]

As a Demon-level threat and a "machine god" robot from The Organization, G4 was very powerful, proving itself strong enough to engage S-Class heroes in a difficult, even if ultimately unsuccessful, battle.[1] Notably, it was able to seriously damage an upgraded Genos, who, at that point, was already capable of defeating Mosquito Girl and a hydrated Deep Sea King with relative ease.[11]

Integrated Weaponry: G4 had a variety of military-grade weaponry on its body.[1]

Robotic Combatant: Being a robot, G4 relied on his strength and inbuilt weapons.

G Blade (G ブレード, G Burēdo): G4 was equipped with a giant sword that was paired with his large suit.[2] 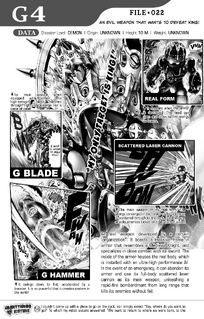