What Can't Be Bought

Funeral Suspenders wears a black suit with red suspenders. He has spiky silver hair with a stray bang over his forehead. He also wears glasses and has a red lightning marking on his forehead.

Funeral Suspenders is one of several heroes who attempt to defeat the monster Hundred-Eyes Octopus, but he is defeated and saved by Bone and Red Muffler.[3]

What Can't Be Bought[]

Funeral Suspenders and D-Pad arrive shortly after Saitama has defeated yet another Mysterious Being, taking it upon themselves to cordon off the creature's corpse and inadvertently getting the credit for its defeat.

Later, they attempt to thwart a bank robbery being perpetrated by the A-Class criminal Bull-Bull. They manage to successfully defeat several of his henchmen but are defeated simultaneously by Bull-Bull.

It is implied that D-Pad and Funeral Suspenders frequently team up and train together, even having developed special fighting moves only they can perform with the other's assistance. Sometime after the event, he received a promotion to rank 40.[4]

Funeral Suspenders was among the many heroes summoned by McCoy to combat the monster that was devastating the Z-City police station. He arrives at the scene late, after Saitama has already killed the monster.[5]

As a rather higher-ranked member of the C-Class, it can be presumed that he is stronger than most other heroes of his class.

Expert Hand-to-Hand Combatant: Funeral Suspenders has not been shown to have any special powers, though he is shown to be a confident unarmed fighter. He fights in tandem with his partner D-Pad. 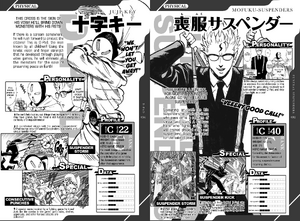