One-Punch Man Wiki
Register
Don't have an account?
Sign In
Advertisement
in: Articles in need of citations, Characters, Female,
and 7 more
English

View source
watch 01:14
Hero Spotlight: Fubuki
Do you like this video?
Play Sound

Fubuki (フブキ, Fubuki; Viz: Blizzard), also known by her hero alias Blizzard of Hell (地獄のフブキ, Jigoku no Fubuki; Viz: Hellish Blizzard) is the B-Class Rank 1 professional hero of the Hero Association. She is an esper, the younger sister of Tatsumaki, and the leader of the Blizzard Group, a B-Class hero faction. She and her sister are known as the Psychic Sisters (エスパー姉妹, Esupā shimai).[4] Fubuki is currently trying to recruit Saitama into her group.[5] She's also a self-declared member of the Saitama Group.[citation needed]

Fubuki is a young woman with a curvy figure, chin-length, dark green hair styled into a bob, and her eyes are light green. Her main attire consists of a long white fur coat, a dark green form-fitting dress, thigh-high black boots and several necklaces. Occasionally, she wears other outfits. 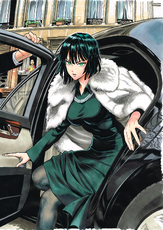 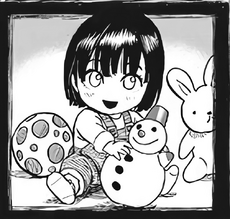 Fubuki as a child

When Fubuki was younger, she was very self-conscious about her curves, particularly her breasts.[6] Nowadays, Fubuki wears elegant, expensive clothing, as she believes in the saying, “clothes define the man”,[2] giving her a rather posh and confident image.

On the outside, Fubuki is a cold-hearted, ambitious, confident individual who does not doubt her own abilities but understands her limits to an extent, causing her to not do anything irrational. She would do anything at all costs to secure her position as the top-ranked hero in B-Class, such as inviting possible threats like Saitama to join the Blizzard Group. If refused, she would attempt to ruthlessly take them down, becoming a prominent source of the "newbie crushing" that is commonly practiced by aspiring professional heroes.[7]

However, despite Fubuki's psychic talents and potential, it has been shown that she internally harbors a massive inferiority complex, being insecure and frustrated at living in the shadow of her much more powerful older sister Tatsumaki.[8] While she agrees with Genos that she is well capable of reaching the higher ranks of A-Class, she believes she could never reach the top of it, let alone reaching S-Class, due to Sweet Mask's gatekeeping at Rank 1 of A-Class preventing anyone from advancing to S-Class.[9] As such, she gathered lower-ranked B-Class heroes, hoping she might one day surpass her sister through strength in numbers, as opposed to Tatsumaki who prefers to work alone.[10]

Despite her insecurity, she carries a heroic nature within her when she was willing to sacrifice herself to buy time for Bang and Bomb to escape from Overgrown Rover, a Dragon-Level threat.[11] She also demonstrated her selflessness yet again, by stepping up to save Genos from the brink of self-destruction, even though it took her a great physical toll.[12]

Fubuki seems to be a charismatic leader, as many of her group members respect and care for her and are willing to risk their lives for her. In return, she cares deeply for the Blizzard Group members and relies heavily on them to advance in rank, despite her own talents in telekinesis.

Fubuki’s personality has overseen a massive change after meeting Saitama, who encouraged her to finally overcome her fears and weaknesses and find her determination to become stronger and advance into A-Class. She dedicates her days to be fully committed to seeing her organization's continued improvement and well-being.[2] After thinking about true strength in the form of Saitama, Fubuki has come to understand her sister more and gather strong allies so she too can help Tatsumaki. Underneath her seemingly cold-hearted and insecure exterior is someone who truly cares about her sister and wants to save her from solitude and isolation, knowing well her responsibility as a hero.[13] By the time the Monster Association executives begin to attack and Tatsumaki heads to fight them, Fubuki is ultimately shown to be extremely grateful for both Genos' and Bang's help in assisting her sister, even showing great concern for the cyborg's recklessness in doing so and being in great relief with tears in her eyes.[14]

Like Tatsumaki, Fubuki is intelligent, yet unlike her sister, she is relatively more composed and level-headed and is shown to possess good deduction skills. However, her strong ego has constantly led to her desperately seeking attention and assuming authority without earning it sometimes.[15]

Fubuki is the strongest among her group and her class, with Saitama being the only exception. She also claims to be capable enough to reach an upper rank in A-Class.[16] However, she was easily defeated by the Demonic Fan and was knocked out.[17] Physically, she appears to be no different than a normal person; Child Emperor's scanning device listed her at a mere "19" while many B-Class heroes are in the several hundreds, and A-Class in the thousands. It should be noted that the results of the device were later declared not reflective of the heroes' actual physical attributes and fighting ability.[18] Beyond her fighting abilities, she has proven a fairly capable leader, able to lead a small army effectively and they, in turn, follow her orders completely.

She is also a fairly competent teacher when it comes to psychic abilities, as she taught every member of the Blizzard Group one psychic technique.[citation needed]

Enhanced Endurance: During her fight against Do-S, Fubuki was able to endure the full force of the monster's whip, which otherwise sent several other heroes flying a considerable distance.[19]

Psychokinesis: Fubuki possesses psychic powers. She has displayed the ability to block a powerful attack from a Dragon-level Mysterious Being, although she was visibly exhausted afterward and claimed not to be able to do it again.[20] Moreover, she is able to sense when her sister is nearby or using large amounts of psychic power.[21] Furthermore, Fubuki's versatility also lies in her vast array of abilities to provide support for her fellow heroes in combat situations.[22][23]

Expert Psychic Combatant: Fubuki has been shown to mainly use her psychokinesis when engaged in combat, using graceful but also destructive techniques which include throwing rocks, pebbles, and various other items at her target. With agile movement thanks to her power of flight, coupled with quick thinking for improvisation, Fubuki is also able to manipulate her surroundings to her advantage to impede or crush enemies. A blue, glowing aura surrounding her body is generated whenever she uses her powers. Despite her experience, she still lacks some control over her strength. There have been a couple instances where she worries that she might have overdone her attacks.

Expand to see original webcomic information. Beware of spoiler content.
Although not nearly as powerful as her sister Tatsumaki, Fubuki is a skilled esper. Even as a young girl, she was allegedly capable of moving a truck.[29] Unlike most espers, Fubuki has developed the ability to control the trajectory of her telekinetic signals, which generally travel in a straight line. Although this ability does not directly affect the power of her telekinesis, it allowed her to create a powerful defensive technique.[30]

Mental Resistance: Fubuki, possibly due to her strong ego, was able to free herself from Do-S' mind control.[40]

Keen Intellect: Fubuki is shown to be an intelligent hero. She correctly deduced the current situation with the Monster Association without the communication system of the Hero Association working properly, while Saitama and the others were clueless.[41]

Through her constant research and quest for versatility and innovation, Fubuki has learned things that not even her sister knows about, such as that resistance to psychokinesis is directly linked to one's willpower.[42]

Box Cutter: She was seen using a box cutter as a last-resort melee weapon against Saitama.[43]