Edit
watch 01:21
Hero Spotlight: Flashy Flash
Do you like this video?
Play Sound

Flashy Flash (閃光のフラッシュ, Senkō no Furasshu) is the S-Class Rank 13 professional hero of the Hero Association. He is a former member of the Ninja Village's 44th Graduation Class, nicknamed The End (終わり, Owari; Viz: The Final).[2]

He is also one of the few people aware of Saitama's strength.

Despite that, he noticed Saitama's lack of proper combat techniques and now intends on making him his disciple.

Flashy Flash is a lean but muscular young man of average height with an androgynous appearance. He has sharp blue eyes and long ice-blonde hair with bangs brushed to the right side of his face.[3] He wears a dark blue bodysuit with metallic bracers over his arms and upper chest armor with a long white cape over it. He adorns himself with two four-pointed stars on either side of his head and on his cape. He has a chain strapped around his waist that holds his sheath and sword in place. 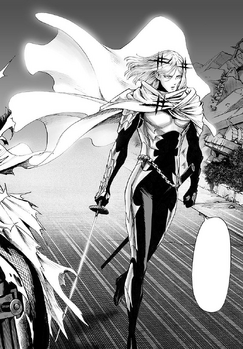 Flashy Flash is a calm and serious man, immediately starting the topic of discussion at the meeting and stopping an argument between Tatsumaki and Metal Bat. He also appears to be quite arrogant, telling lower-ranked heroes to step aside and let him handle the Mysterious Being because he sees them as weak, berating them for potentially causing collateral damage. He is also very confident in his abilities.

Flashy Flash is one of the few heroes who doesn't fear Tatsumaki, talking back to her after she insulted him, stating that she stole his kill against the Hundred-Eyes Octopus, and even went as far as to say that she is not actually stronger than him.

He has a very firm mindset that training is one of the only ways to become truly strong, as he told Gale Wind and Hellfire Flame he only became as powerful as he was through training more than any other heroes or ninja. When the two monsters were dying, they asked Flashy Flash what it was that they were missing, and his response was their lack of training. In a sense, this is similar to Saitama, as he also believes training is the only way to become truly strong.

Despite his collected composure, Flashy Flash has a tendency to be hasty and reckless. His careless attack on Hundred-Eyes Octopus only made the beast cause more destruction, and he has other lapses in judgment such as losing his communicator during the Monster Association raid or attacking Saitama even after recognizing him as a hero. He is very proud of his speed and tends to lose his rigid composure when confronted with those with more speed than himself, such as being bewildered by Saitama's superior agility, and outright horrified by Blast's. This was further demonstrated during his battle with Platinum Sperm and Garou: upon realizing that both of them surpassed his speed, he became utterly infuriated that he'd encountered four individuals in one day who were faster than him, deeming it unforgivable and making him even more determined to win the fight. As noted by Platinum Sperm, when Flash encounters individuals who outclass him in his specialty of speed, he puts all of his effort into protecting his pride, though this also made him more vulnerable to attack and left him with several more openings.

While normally prideful and rude, he did compliment Saitama after witnessing his strength and speed. When he attacked Saitama under the suspicion of being a monster, he was stunned when Saitama avoided his first attack. Though he remembered who Saitama was, he wanted to confirm if he could actually dodge his attacks as his pride wouldn't allow such a thing, making him attack Saitama again, which was actually an unnecessary endangerment of his life.

However, he is incredibly respectful of those he deems strong and is more than willing to give praise to such individuals. An instance of this is when he and Saitama work together with a monster to find the Monster Association's inner sanctum. In a gold mine, he defends against a series of larger monsters' attacks. Unbeknownst to him, Saitama does so as well and keeps an equal pace to him. He is astounded and impressed by Saitama's strength, calling him "Pretty good."

After secretly witnessing Saitama defeat Garou, he begins to admire him and wishes to train him since he is aware Saitama is incredibly strong but lacks technique.

In terms of combat, due to being a ninja, he prefers quick and efficient strikes that can kill or defeat opponents as fast as possible before they can react. Therefore, because of this philosophy, despite acknowledging Saitama's immense prowess and speed, Flash still looks down on him as Saitama often gives his opponents a chance to attack him and doesn't kill or defeat his opponents quickly or efficiently.

Even though he has a rough exterior, he is merely a victim of the horrendous training of the Ninja Village, where he was forced to hide and completely remove himself from his emotions. As a child, Sonic could tell that Flash had a burning passion for freedom similar to Sonic, demonstrating that despite his mediocre rating of 5 for Justice on his Hero Rating, he has a burning passion for justice. This was why when he was 16, he finally decided to eliminate everyone at the Ninja Village and remove its evil roots.

As an S-Class hero, Flashy Flash is very powerful. In terms of speed, he is arguably the fastest S-Class hero in the association, though he is inferior to Blast, the top-ranked S-Class hero.[4] He is the former top ninja of the 44th graduating class of the village that Speed-o'-Sound Sonic hails from.[5] Flashy Flash is also one of the few S-Class heroes capable of defeating multiple Dragon-level monsters singlehandedly, as demonstrated when he was able to defeat Hellfire Flame and Gale Wind, two powerful Dragon-level threats without suffering any serious injury or visible fatigue, although he needed to use his finishing move to eliminate them.[6] According to Superalloy Darkshine, if Garou, even in his half-monster state, were to fight him, the Hero Hunter would most likely die before being able to show any of his techniques.[7] Additionally, despite being at a disadvantage due to losing his main weapon, Flashy Flash was still capable of holding his own against Platinum Sperm and an evolved Garou for a short period of time,[8][9] the former of which being the ultimate fusion of a powerful Dragon-level Mysterious Being, while the latter being strong enough to have defeated powerful S-Class heroes such as Superalloy Darkshine and Silver Fang.

Flashy Flash is also a very analytical fighter. He strategically waited for the right moment to incapacitate Gale Wind and Hellfire Flame simultaneously to prevent either from escaping, reasoning that the other heroes would have trouble with the ninjas' speed. He was also able to discern Saitama's physical attributes by analyzing the sound of his footsteps.[10]

At age 16, he was strong enough to eliminate everyone in the village singlehandedly albeit with very heavy injuries, an extremely impressive feat considering the strength of all the ninja in the village.[11] When fighting against the Heavenly Ninja Party, together with Speed-o'-Sound Sonic, they were able to kill all 21 ninjas, with Flash sustaining no visible injuries.

Immense Speed and Reflexes: Flashy Flash possesses incredible amount speed and reflexes, surpassing most other characters. He is said to kill enemies like a flash of light before they can even sense what happened.[1] His speed leaves powerful shock waves in his wake. He was able to travel to Hundred-Eyes Octopus, a Demon-level Mysterious Being, and slash the monster's eyes in the blink of an eye.[12] During the initial attack against the Monster Association, Flashy Flash dispatched some monsters so quickly that Shadow Ring, a fellow ninja, could not see what happened.[13] He was able to effortlessly keep up with two Demon-level monsters known for having remarkable speed, Hellfire Flame and Gale Wind in their human forms, only taking some pressure when they transformed into their Dragon-level monster forms, and was able to kick them at speeds they were unable to counter. After having stunned Gale Wind and Hellfire Flame with a barrage of fast kicks, he managed to cross a great distance and perform one of his ultimate techniques, slicing the two monsters in half before they could even react, and his actions were so fast that they seemed to happen almost at the same time.[5][6] Flashy Flash's speed was also remarkable enough to impress Saitama, with the latter stating he was "kinda fast".[14] During his fight against an evolved Garou and Platinum Sperm, Flashy Flash and the other two fighters were combating each other at extreme speeds that a geometric structure of light was even created from their blinding movements.[15]

He dispatched Gale and Hellfire, two Disaster Level Demon Mysterious Beings who take great pride in their speed, before either of them could understand what had happened.[16] He is the only S-Class hero who managed to dodge at least one of Garou's attacks.

He was able to dodge multiple attacks from Saitama during their sparring match, although Saitama claimed they were only playing "tag", and Saitama admittedly had many wasted movements.[17]

Immense Strength: Flashy was shown to be strong enough to combat and defeat two Dragon-level threats simultaneously. He can deliver powerful kicks that can stun Dragon-level monsters. He can also easily cut massive pieces of stone and create giant explosions throughout his fighting. Additionally, the large crevice where he was battling Gale Wind and Hellfire Flame was completely destroyed as a result.[6]

Immense Durability: Flashy Flash is shown to be very resilient. He was able to sustain numerous direct hits from two powerful Dragon-level monsters Gale Wind and Hellfire Flame at once without any serious damage, only coughing up small traces of blood.[18] He was also able to withstand several blows from Platinum Sperm as well as an evolved Garou and still last for a short while.[19][20]

Enhanced Senses: Flashy Flash was capable of estimating that Saitama's weight was around 70 kg just based on the footsteps, and also realized that his presence didn't match that of any member gathered there.[21]

Ninjutsu Master: Gale Wind noted that Flashy Flash's technical precision surpassed both his and Hellfire's.[22] Flashy Flash also states that he has trained more than any other ninja from The Village.[23]

According to Zombieman, Flashy Flash is rumored to be one of the S-Class's best in terms of fighting capability. He also possesses advanced movement and unarmed combat techniques, proving to be a versatile fighter and held enough confidence in them to teach Saitama proper hand-to-hand combat techniques.[17]

Katana: Flashy Flash wields a katana with a round guard called Instakill (瞬殺丸, Shunsatsumaru; Viz: Flashkill). He is very skilled in using it in combat, as he defeated two Dragon-level monsters with it. The sword was broken when Flashy Flash was trapped under a cave-in and its blade got stuck in the rock, which Tatsumaki ripped out of the ground.

The sword was broken again by Saitama with his teeth during the sparring session with Flash. This caused Saitama to begin planning to get Flash another katana so that they will be even and Flash won't ask Saitama for any favors.

Kunai: Flashy Flash wields a kunai as a secondary weapon.[41]

Waterproof Cape: Flashy Flash wears a waterproof cape which he uses to shield himself from liquids, as shown when he attacks the Hundred-Eyes Octopus, where he flicks the monster's blood cleanly off of it.[42] 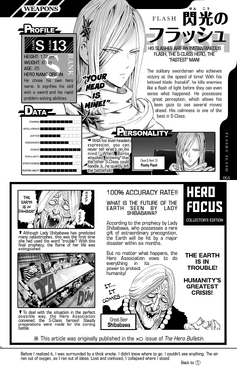