Eyesight (ガンリキ, Ganriki; Viz: Ganriki) was a Demon-level Mysterious Being that attacked Y-City during the Monster Raid. Eyesight was a member of the Monster Association. She was killed by Pig God.[1]

Eyesight appeared as a Medusa-like monster that also looks similar to the Hindu Goddess Kali, being half-snake and half-woman with skeletal jewelery. She wore a crown in the form of a skull with a pearl embedded in it, along with skull-like bobbles, a skull necklace, and a belt of skulls. Her face had snake-like features such as lacking a nose and has snakes for hair. She had three fingers on each hand with long nails. Her skin was purple with black dots spread throughout. She possessed large earrings on each ear. She wore two straps that covered her breasts but otherwise bared her torso.[2]

After withstanding Underdog Man No. 22's self-destruction, Eyesight transformed into a larger, more monstrous-looking form. Her white skin became dark greyish purple and with a scale-like appearance, and her face became less human and more reminiscent of a large snake. 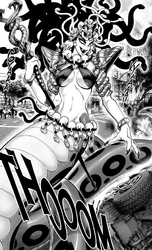 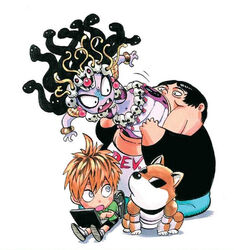 Eyesight appears along with other monsters of the Monster Association, simultaneously attacking citizens in different cities.[3] Eyesight attacks Y-City during the Monster Raid and paralyzes many heroes.[4]

Child Emperor uses Underdog Man No. 22 to analyze Eyesight's poisons to find a cure for the paralysis. Child Emperor then proceeds to detonate Underdog Man No. 22, but that did not successfully kill Eyesight as she hardened her skin. Eyesight then manages to find him crouched behind a car, but is interrupted and eaten by Pig God. She is killed when Pig God swallows her.[5] Pig God decides to go after the other monsters in Y-City afterwards.[6]

As a Demon-level mysterious being of the Monster Association, Eyesight was an extremely powerful being. With her poisons, she was one of the most lethal.

Paralyzing Venom: She possessed venom that was capable of paralyzing several heroes. Depending on the level of venom she unleashed, the weakest poison took atleast 2-3 days to kill a person, while the strongest poison could kill even a monster within seconds.

Snake Hair: She can use her snake hair to attack or constrict her targets.

Transformation: Eyesight was able to transform into a more menacing and monstrous form, which presumably increases her abilities.[7] She transformed immediately after Child Emperor's Underdog Man self-destructed on her, but whether this transformation was triggered by exposure to the explosion itself or if she could do so at will is unknown.

Enhanced Durability: Eyesight was able to withstand the explosion caused by Underdog Man's self-destruction. It is unknown if this was due to her transformation or not.[8]

Enhanced Strength: Eyesight was able to easily lift a car with one arm.

Heat Sensing: Eyesight can sense heat from targets even if they are behind other objects and from faraway.

Staff: Eyesight wielded a Caduceus-like staff. It was a long staff entwined by two serpents.