After merging with the ocean, it became known as Evil Ocean Water (エビル海洋水, Ebiru Kaiyō Sui) until it was seemingly destroyed by a punch from Saitama.

Evil Natural Water is a huge mass of water with a pair of eyes floating inside. It can freely change its shape, meaning it has no true state of being. Its eyes grow as it gains more water.

After absorbing the oil of Sludge Jellyfish, it becomes more viscous, able to take on a more globular shape. Then after absorbing massive water from the ocean, it's size dwarves even the tallest of buildings with it's eyes being bigger than a carrier. 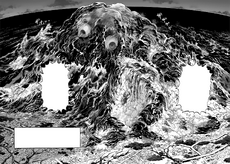 Evil Natural Water is said to be the most dangerous member of the Monster Association. It is a mindless monster and hard to control; Psykos secluded it in a vault to control it. It senses hostility towards itself and attacks the hostile entity non-stop. Despite its seemingly mindless nature, it does have some form of thought process, as it knew to absorb the oil in Sludge Jellyfish to resist Child Emperor's freezing attacks.

Evil Natural Water was created by accident through Psykos' experiments. Because they could find no way to control it, it was sealed away in the Monster Association's vault.

Evil Natural Water is one of the executives shown when Sludge Jellyfish talks about the Monster Association executives.

Sometime during the raid on the Monster Association, Atomic Samurai's disciples and Narinki's Private Squad are held up by a large group of monsters. They proceed to slaughter all of them, but one manages to escape. It is pursued into a large room containing several vaults; and it opens one of them out of desperation. Evil Natural Water comes flowing out of a tank, killing the monster and proceeds to fight the heroes and mercenary. During the battle, Tongara is severely injured by Evil Natural Water but the four briefly manage to escape thanks to Bushidrill destroying the ceiling to the vault, causing it to collapse. The executive monster begins to burst through the cave-in and Tongara, knowing that he can not continue, asks that the three heroes escape while they can. They run off, and Evil Natural Water washes over the mercenary while the Mad Doctor Fish rip him apart.

Sludge Jellyfish then enters the room, offering to assist Evil Natural Water. Evil Natural Water reaches a water arm at the monster and sucks up the oil in his body, rendering Child Emperor's freezing attacks ineffective. It shoots a jet of water at the hero that pierces his leg and breaks apart his robot.[2]

During the confrontation, Garou arrives and, responding to his hostile aura, Evil Natural Water attacks him with two water jets, although the Hero Hunter deflects its attacks and proceeds to disperse it entirely. Soon, Evil Natural Water manages to seep into the sea, and it begins to strengthen even further by merging with the ocean. Its eyes, having grown to colossal sizes, emerge from the water and capsize an aircraft carrier.[5]

Soon, similarly to Elder Centipede's appearance, another monster known as Sage Centipede appears who dubs Evil Natural Water as the incarnation of "Mother Ocean" and calls it Evil Ocean Water. With Evil Ocean Water appearing on land and dwarfing the land itself, it joins Sage Centipede and obeys the latter to a degree as it then attacks Garou together alongside the centipede-like monster.

Transported to the battlefield by Blast, Saitama immediately makes a beeline for Evil Natural Water, hurtling along the surface of the ocean at incredible speed. With a mighty Serious Punch, Evil Ocean Water is completely and utterly obliterated; punctuated with Saitama grumbling under his breath about being fed up with its watery antics. Upon its defeat, Sage Centipede believes Evil Ocean Water to be dead as its body finally disintegrates.

After a while, Evil Natural Water collects all of his water droplets into one and reforms, preparing to finish off heroes defeated by Awakened Garou. However, Saitama disperses it into several droplets all across the battlefield with only a single punch. Despite this, Evil Natural Water is still not dead; it later reappears in a smaller form stabbing Air in the throat. Pig God tries swallowing the creature, and it fires its jets in an attempt to escape, causing Pig God to bleed out of holes all over his body. Eventually, Evil Natural Water is digested by him, signifying its permanent death.

As a high-ranked member and a Dragon-level threat of the Monster Association, Evil Natural Water is an extremely powerful being. Gyoro Gyoro fears it enough to keep it secluded in a vault, and after being freed it proved to be strong enough to easily defeat three of the top A-Class heroes; Iaian, Bushidrill and Okamaitachi. After merging with the ocean, Evil Natural Water has become immensely more powerful than before and grown massively in size, making it one of the largest monsters in the series.[6]

Liquid Body: Evil Natural Water's body is made entirely out of water and has no vulnerable internal organs or weak points to target, thus making it almost impossible to deal physical damage to the creature. Being composed of liquid also makes it immune to chemical attacks.

It is able to appear as a simple blob of water that can transform into a massive monstrous canine form and can imitate body parts such as jaws,[7] and shape part of itself into a large blade.[8] Tatsumaki's psychokinesis and Saitama's tremendously powerful punches were able to scatter it into many droplets despite this, but in both cases, it survived. Pig God's powerful stomach acids were the only things able to end the life of the Evil Natural Water by dissolving the water, and even then only in a severely weakened state.

It appears to be able to absorb moisture from the air as Black Sperm noted the dry air from Evil Natural Water's re-appearance against Garou.[11]

It was able to sever Sweet Mask's arm off and cut a hole through his chest. The speed of these jet streams is fast and strong enough to overpower even the likes of Atomic Samurai and Pig God.

Advanced Perception: Evil Natural Water is able to sense and react to hostility towards itself,[14] responding by instantly attacking the hostile entity non-stop. Upon being released by Master Joe, Evil Natural Water immediately followed and continuously attacked the Narinki's Private Squad and Atomic Samurai's disciples as they presumably had such negative feelings in front of it.

Hyper Instincts: While a formless effigy acting purely on animalistic guile, at first glance Evil Natural Water seems like a simpleminded mysterious being. In truth, however, it possesses an underlying intuition to adapt and modify itself along with its approach to a target. An example of this is absorbing the fuel oil from Sludge Jellyfish for the purpose of bypassing being frozen.[9]

Freezing Resistance: After absorbing the oil from Sludge Jellyfish, Evil Natural Water's body has a much lower freezing point than water, allowing it to resist being easily frozen.[9]