Edit
watch 01:03
Monster Spotlight: Elder Centipede
Do you like this video?
Play Sound

Elder Centipede (ムカデ長老, Mukade Chōrō; Viz: Centichoro) was a Dragon-level Mysterious Being and an executive member of the Monster Association. He was killed by Saitama.[2]

Elder Centipede was a gargantuan centipede creature. In the center of his head was an old, wrinkled, humanoid face. Elder Centipede's appearance, in contrast to his smaller counterparts Junior Centipede and Senior Centipede, was far more antagonizing and intimidating. In the manga, his carapace was dark black; in the anime, his armor is dark purple. His centipede face, directly below the humanoid head, had four glowing eyes, long antennae, and a large mouth with sharp teeth. His initial width was 15 meters wide, with 3 layers of faces.[3] After molting during his fight with Bang, Bomb and Genos, Elder Centipede grew even larger in size and his third face peeled back to reveal a fourth along with 2 additional glowing eyes. The fourth face had an additional eye on its forehead and his mandibles were also significantly larger than before.[4] 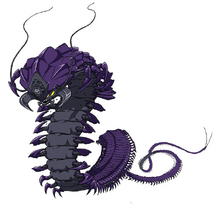 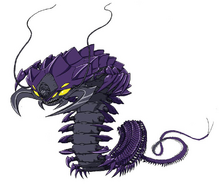 Elder Centipede's appearance after molting during his battle with Bang, Bomb and Genos.

Elder Centipede's first notable trait was that compared to his counterparts, Junior Centipede and Senior Centipede, he was much more stoic and less verbose. He was far more focused, tactical, and cautious of his opponents, ignoring conflict and going directly after his targets instead of engaging in pointless fights - because of his immense size and powerful defense, he could easily tank any attacks directed his way. He is not known to have had his own ideas or ambitions, just being content to work as a higher-up of the Monster Association.

However, due to nearly dying to Blast two years ago, Elder Centipede holds a vicious grudge against him and would jump at any chance to get a rematch. This is shown when he immediately abandoned his fight with Bang, Bomb, and Genos when King announced that Blast was nearby. It's possible that it was because of this defeat at Blast's hands that he became less arrogant and more careful.

Two years prior to the current events, Elder Centipede was almost killed by Blast.[5] Ever since, the monster was seeking chances of revenge on the hero and agreed to cooperate with the Monster Association to achieve his own goal. On the other hand, however, Elder Centipede had been anxious because of the obscure and mysterious movements of Blast and tried to lure him out.

The last time he appeared he caused heavy damage to a city and then disappeared.[6] According to Hero Association staff members, Elder Centipede was bigger than when he was last spotted two years ago.[7]

After Metal Bat defeats Senior Centipede and Rafflesidon, Elder Centipede emerges from the ground.[8] He attempts to kidnap the Hero Association sponsor Narinki but is intercepted by Metal Bat, who lands a strike near his face. However, Metal Bat's swing does not harm Elder Centipede, and he flings Metal Bat away.[9]

Elder Centipede continues to rampage through the city as he tries to get his hands on the Hero Association sponsors. When he finally manages to corner Mohican and Pineapple, Metal Knight arrives and fires missiles at Elder Centipede. Despite the powerful set of missiles, Elder Centipede remains undamaged by Metal Knight's attacks and comments that the robot is just an annoying pest.[11]

Elder Centipede later picks up his allies and escapes, with Metal Knight in tow.[12]

Elder Centipede is later seen accompanying Phoenix Man to rescue Garou, protecting the former from Genos's Spiral Incineration Cannon. He proceeds to engage Bang, Bomb, and Genos while Phoenix Man escapes with the Hero Hunter. Despite their combined strength and even accomplishing significant damage towards Elder Centipede, Bang, Bomb, and Genos were incapable defeating Elder Centipede due to his molting and regeneration abilities, and are forced to retreat. As they pull back near the end of the forest, Bang intends to sacrifice himself and prepares to go all-out against Elder Centipede, in order to buy Bomb enough time to escape with the unconscious heroes and Genos.

Fortunately, King arrives and catches Elder Centipede's attention by tricking him into believing that King brought Blast with him, as well as taunting the monster, making the monster charge toward the S-Class hero. Elder Centipede meets his demise when an unnoticed Saitama, who was behind King, threw a Serious Punch that disintegrated his entire body from head to tail until there was nothing left of the monster beside his lifeless claws.[2] Credit for his defeat went to King since only King, Genos, Bang and Bomb knew that Saitama is the one that killed the monster.[13]

Elder Centipede was a Dragon-level executive member of the Monster Association and one of the largest monsters in the series. It was noted that he even grew in size since two years prior to re-emerge and this massive size along with his speed and power makes him an extremely powerful monster. According to Gyoro Gyoro, there were only four heroes from the Hero Association capable of defeating Elder Centipede: Tatsumaki, Metal Knight, King (Saitama), and Blast.[2] Both Phoenix Man and the Hero Association compare Elder Centipede to natural catastrophic disasters. His power is proven when he was able to easily handle three S-Class level opponents in Genos, Bang, and Bomb; with Phoenix Man claiming the only result of such a fight being complete slaughter for the heroes. This assessment almost came true if it weren't for King's and Saitama's intervention.

Immense Strength: As a Dragon-level threat and plus his enormous size, Elder Centipede possessed immense strength. He was able to level an entire city just by passing through it and tunnel through the ground with ease.[14] He was able to knock Metal Bat hundreds of feet into the air and across the city.[15] In addition, Elder Centipede was also strong enough to simultaneously push back Bang and Bomb with a tackle and easily cut Genos in half with his mandibles.[2]

Immense Speed: Elder Centipede was able to maneuver across a whole city with ease.[16] He also had the ability to dig under the ground at high speeds.[17] His reaction time was also impressive as he managed to turn his head to the side in time to block Metal Bat's swing with his carapace shell.[18] Elder Centipede was even fast enough to intercept one of Genos's blasts after it was already fired into the sky.[2]

Immense Durability: Elder Centipede's unprotected face was able to survive multiple direct hits by Metal Bat, although he did show signs of pain.[19] Elder Centipede took severe damage from the combination attacks from Bang and Bomb that damaged his outer body and Genos's heat blast from within that incinerated his insides but still did not go down completely. His teeth alone were shown to be extremely durable as well, as Genos barely managed to break through one of them with Jet Drive Arrow, one of his strongest physical attacks, and even exerted a lot of energy into that powerful attack.

Immense Endurance: Elder Centipede possessed incredible endurance, being able to easily fight off multiple S-Class heroes with ease while enduring their attacks without much damage. He was able to continue fighting even after taking severe damage from Bang, Bomb, and Genos in rapid succession along with recovering from such damage in seconds. Only Saitama's punch which completely disintegrated his body stopped him altogether. Both his carapace armor and regeneration may influence this factor of him.[2]

Regeneration: Elder Centipede was capable of regenerating from an extreme amount of damage, such as regrowing his teeth, eyes, and even being able to recover from having his insides completely incinerated, very quickly.[2] However, if his entire body is completely destroyed, he will not be able to regenerate, as seen when he was obliterated by Saitama's Serious Punch.[2]

Acidic Digestive Fluids: Elder Centipede's insides are coated with extremely corrosive digestive fluids that would even melt the cybernetic body of Genos if he stayed in contact with them for too long.

Molting (脱皮, Dappi): Every time he shed his outer shell, Elder Centipede grew bigger and stronger than he was before alongside gaining another face.

Mass Destruction: Elder Centipede used his size to cause catastrophic destruction, being compared by the Hero Association to a "natural disaster."[23]

Transportation: Due to his sheer size, movement speed and ability to tunnel underground, Elder Centipede was used as a form of transportation for smaller monsters.[25]