This article is about the character. For the chapter, see Chapter 118.

Drive Knight has long black hair and wears a white mask. His mask has a single horizontal slit for the eyes, and a single red shining eye in the center of the slit. The mask has three small vertical slits where his mouth should be. His armor is rather simplistic, being similar to a medieval knight's armor. His appearance changes with his Tactical Transformations. 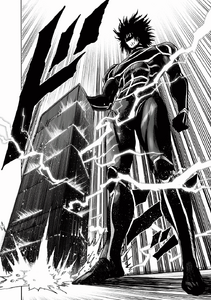 Drive Knight is an incredibly tactical and calculated fighter. He is very focused on gathering information, valuing reconnaissance over the safety of the multiple heroes fighting Nyan, and does not underestimate his opponents even if they are below his level of power. He is not willing to allow an enemy who has seen his abilities to live, possibly to avoid allowing his opponents to learn and therefore exploit his weaknesses. He is also quite merciless towards monsters, willing to use any means, including torture, to obtain the information he desires.[5] Despite this, he is willing to capture certain monsters if they are powerful enough or pique his interest, as seen when he tries to capture Nyan.

Drive Knight works of his own accord despite the Hero Association's orders. According to Sekingar, Drive Knight's confidence stems from the fact that he has never lost a battle.

Drive Knight dislikes and is deeply suspicious of Metal Knight, and when Sekingar explains the status of multiple S-class heroes, who were put in the hospital by simultaneous monster attacks, the hero berates Sekingar for the blind trust they've put in Bofoi and claims that he is the mole. When Sekingar asks for proof of this, Drive Knight gives an advanced analysis of all the factors that would indicate Bofoi's treachery, although offers no strong evidence to prove his claim. As a result, Sekingar begins to doubt Drive Knight's loyalty, seeing too many inexplicable things surrounding his actions and suspecting he may be a traitor.

He also appears to be a single-minded and heartless man with his own objectives, as shown when he ruthlessly drops Genos from great height after his objective in collecting a sample of the fusion of Psykos and Orochi's flesh was completed and doesn't bother taking care of the fellow cyborg's overloading condition.[6]

As an S-Class hero, Drive Knight is very powerful. He was able to easily defeat a group of Tiger-level Mysterious Beings,[7] and he managed to defeat the Dragon-level monster and Monster Association executive Nyan relatively quickly and without sustaining much damage thanks to his multiple features and immense strength. However, he admitted that he won because Nyan was overconfident and reckless and he had already collected battle data beforehand, which allowed him to gain the upper hand.[8] Additionally, Drive Knight claimed the fight with Nyan drained his battle energy to the point that he could no longer even move.[9] Sekingar has claimed that Drive Knight has never lost a battle before. This reputation is enough to cause worry for the Hero Association when the possibility of his defeat is presented.[10]

Immense Strength: Drive Knight possesses tremendous physical strength. He was able to effortlessly rip off the head of a Tiger-level Mysterious Being.[11] He was also able to send Nyan flying with a single punch, although these punches did not deal significant damage, and he was strong enough to stab Nyan in the chest after roasting him.[12]

Immense Speed and Reflexes: Drive Knight has quick movements even outside his Knight form. He was able to use his shape-changing box to form Silver and quickly decapitate two Tiger-level Mysterious Beings before any of them could figure out what was happening. Furthermore, Drive Knight was capable of keeping up with Nyan in combat, a Dragon-level Mysterious Being that previously moved faster than a group of B, C and A-Class heroes could react, even outpacing the monster at some point.

Immense Durability: Thanks to his very sturdy machine body, Drive Knight can withstand very powerful blows. He was even able to stay standing after taking Nyan's multiple Feline Retributions, and in his Gold form, he could withstand these attacks with minimal damage.[13]

Core (コア, Koa): Similarly to Genos, Drive Knight's body is powered by an energy core. During their battle against the fusion of Psykos and Orochi, he requested Genos' cooperation to combine through coalescing their energy cores to maximise their power output.[14]

Tactical Transformation (戦術変形, Senjutsu Henkei; Viz: Battle Transformation): Drive Knight effectively uses his shape-changing box to create weapons and transform his body. This method of combat is highly versatile and adaptable; his transformations are situational. Nyan noted that he could not predict Drive Knight's moves.[15] Due to the situational effectiveness of each transformation, Drive Knight's fighting style consists of transforming multiple times during a fight, depending on the number of monsters involved and on the strength of each monster individually. The speed of each transformation does not seem to be an inconvenience, as it appears to occur almost instantaneously: the transformation from Chariot to Knight was fast enough to let Drive Knight counter the extremely nimble and fast monster Nyan moments before he reached Drive Knight's head with his claws. He was also able to transform between Flying Chariot, Chariot and Bishop almost instantly while he was chasing the fusion of Psykos and Orochi.[16][17]

Tactical Combination (戦術合体, Senjutsu Gattai): When Drive Knight's energy reserves are depleted, he can fuse with another cyborg or robot to gain access to their energy cores, thus allowing maximum energy output. Drive Knight's shape-changing box transforms their bodies in order to gain promoted versions of his regular Tactical Transformations. Drive Knight explicitly stated that this ability's may not function depending on the compatibility of his robotic partner. This ability was first used in conjunction with Genos.[30]

Keen Perception: Drive Knight can identify the threat level of the Mysterious Beings he engages against. Whether this is because of his robotic mechanisms or a comparison of his strength to the monsters he fights remains unclear.[32]

Master Strategist: Drive Knight can use the information gathered on a Mysterious Being to his advantage by exploiting the weaknesses of the target. Through this, Drive Knight also decides which Tactical Transformations are best suited for fighting his opponent.[33]

Electricity Absorption: Drive Knight can absorb electricity in any type of power outlet as an emergency energy source if his current storage of battle energy is depleted. Drive Knight may absorb extremely large amounts of electricity at once, enough to cause a power outage in a section of City Z.[34]

Shape-Changing Box: Drive Knight possesses a box-like object that contains various cybernetic parts. It can swiftly change shape and fuse with his own body to form various weapons for combat or even as a means of transportation. Drive Knight also uses it to torture his enemies.[35]

Drive Knight has a limited energy reserve; when it is depleted, he is unable to fight.[37]

The rating might be mostly unknown due to Drive Knight's ability to change his form, rendering fixed statistics pointless.