One-Punch Man Wiki
Register
Don't have an account?
Sign In
Advertisement
in: Characters, Humans, House of Evolution,
and 8 more
English

Edit
watch 01:18
Character Spotlight: Dr. Genus
Do you like this video?
Play Sound

Dr. Genus (ジーナス博士, Jīnasu Hakase) is a world-renowned scientist and the founder and former head of the now-defunct House of Evolution.[3]

Genus, despite his old age, has the appearance of a young man due to his genetic experimentation. He has sharp features with blue eyes and black hair parted on the right. He wears rectangular glasses. 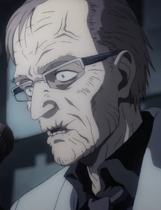 Dr. Genus is gifted with a vast intellect, but due to that at a young age, he became disillusioned with the rest of society. He feels that society needs to evolve and that if it can't do so by itself he must make it evolve. He had a change of heart after witnessing Saitama's fight with Carnage Kabuto, beginning to think that he is the one who must change.

From an early age, Dr. Genus doubted the claim that humans have unlimited potential; he considered the people around him to be primitive and found it painful to live among them.[4] At age fifteen, he resolved to make humanity evolve further and create a world suitable for him.[4] Over the next few years, he used his intelligence to make various contributions to the world.[5] However, despite all the praise he received for his intellect, no one would approve of his ideas to artificially evolve human beings through man-made mutations.[6]

He thus decided to carry out his plans by himself.[7] His plans finally started bearing fruit after he turned seventy, when he managed to return his body to its previous youthful state.[8] He then created clones of himself to assist with his experimentation on animals, then switched his attention to humans. He named their laboratory the "House of Evolution" and, through experimentation, created a large number of new species.[8]

Dr. Genus reacts to news of Saitama defeating Mosquito Girl, casually noting that Mosquito Girl without blood was just an insect with wings. However, the clone corrects him, stating that Mosquito Girl was defeated even after consuming a large amount of blood, moreover in a single hit. Genus momentarily wonders why Saitama is naked before declaring his intention to examine Saitama's body for experimentation, sending Kamakyuri, Frog Man, Slugerous, Ground Dragon, Armored Gorilla, and Beast King to "invite" Saitama to the House of Evolution. Much to his frustration, the mysterious beings he had sent were wiped out, forcing him to make plans to release Carnage Kabuto as a last resort.

The original Genus appears in front of Carnage Kabuto after the test subject had killed a number of his clones, proposing he bring in Saitama for his experiments. Carnage Kabuto takes Genus along roughly, and after Genus identifies Saitama and Carnage Kabuto challenges him, Genus is seen nursing his injuries while witnessing the battle between Carnage Kabuto and Saitama from afar. Like Carnage Kabuto, Genus is taken by surprise at Saitama's explanation of his immense strength.

Upon witnessing Carnage Kabuto enter Carnage Mode, Genus loses all hope for a moment and is completely taken aback when Saitama obliterates Carnage Kabuto with a single punch. Genus, apparently finally understanding the meaning of Saitama's words, then abandons his evolutionary endeavors and concludes that he himself is the one who has to change.

In the anime, Dr. Genus and the Armored Gorilla are working in their takoyaki shop when they see the news about the attack on A-City by the Dark Matter Thieves.[9]

After much trial and effort, Zombieman is able to track down the former mad doctor and his cyborg aid and confronts them about his suspicions that they are the God level threat mentioned in Shibabawa's prophecy. However, when Zombieman does confront them he instead learns that Dr. Genus had discarded the very idea of the House of Evolution. He now agrees with Saitama's philosophy that what makes humans strong is that they can change themselves, without the need for monsterization, cybernetics, genetic engineering or drug regimens. Genus goes on to detail his theory about Saitama's power: In order to function, every living thing needs to have limitations placed on themselves, or else the immense power of a limitless being would drive them insane. In Saitama's case, aside from losing all of his hair, he also lost his will to live and experienced an alienation from his surroundings. As for why he opened a takoyaki shop, through his research into physical regeneration, he discovered a way to grow octopus tentacles infinitely.

After Garou's defeat, Zombieman meets with Genus to discuss about his confirmation about Saitama breaking his limiter to gain god-like power. Zombieman requests Genus to remove his limiter, like what Saitama did to himself. However, Genus tells Zombieman that he will show Zombieman something interesting in the basement of his shop.

He is seen watching over Zombieman, who is heavily injured and coughing up blood, likely due to the training to remove Zombieman's limiter.

His endurance and fighting ability is considerably average, but he managed to survive Carnage Kabuto's abuse and even managed to stand and walk while suffering from intense physical pain.

Eternal Youth: Dr. Genus possesses eternal youth, which he attained by modifying his own genes. His old self reverted to his younger self and has stopped aging.

Genius-Level Intellect: Dr. Genus is a man gifted with immense intelligence. Even at a young age he had made various scientific contributions.[10] His fantastic mental capacities have allowed him to accomplish many genetic wonders.

Youth Formula: At some point in his career, Dr. Genus found the secret to youth, reverting his seventy-year-old self to a younger state.

Clone Creation: Dr. Genus knows how to clone through scientific means. He has created a vast amount of clones of himself that he uses as assistants.

Genetic Mutants: Dr. Genus, after considerable experimentation has figured out how to create artificial mutants such as Beast King and Carnage Kabuto.