Do-S resembles a human female with long, blonde hair with a black flower on the left side of her head. She has a curvy body type, pink eyes with black sclera and a pink, heart-shaped symbol on her forehead, as well as many piercings on both ears. She dresses in a very revealing BDSM outfit which is made of tight straps and held by metal rings that show off her curves. The straps connect at two points on her torso, both with rings at their centers, the first above her chest and the second on her belly, with the ring encircling her navel. Her right hand has two spiked leather rings and a leather vambrace, while her left hand has a very long leather glove with holes in it. Her attire is adorned with high-heeled boots and rips armed warmers. In addition, she also dons a mask with an "S" symbol over the filters as well as a spiked choker. Her unmasked face has a wide, cracky mouth, sharp shark-like teeth, and a long, flexible, slimy tongue. 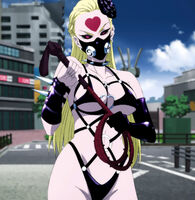 Do-S in the anime

While normally acting dominant, Do-S was proven to be submissive and shrewd when faced with individuals more powerful than her like Orochi, quickly making excuses to avoid punishment from the Monster King after failing to kill Tatsumaki and Fubuki. She was always eager to add more slaves to her army, jumping at the opportunity to subjugate Narinki's Private Squad and Atomic Samurai's Disciples.

Do-S appears along with the other monsters of the Monster Association simultaneously attacking a random city.[1] She easily defeats Darkness Blade, Saturn Man and Pandaman and explains her abilities to Dynamite Man. She then orders the now hypnotized heroes to attack Dynamite Man, but they are immobilized by the Blizzard Group. Before she is able to retaliate against them, Fubuki stops her whip in midair.[2]

Do-S was overpowering Fubuki and managed to turn all of Fubuki's subordinates into love slaves. While Fubuki tries to hold off Do-S's love slaves, Do-S's whip eventually manages to pierce through Fubuki's telekinesis and hit Fubuki.[3] Do-S manages to hit Fubuki multiple times. Believing that she has Fubuki's mind under her control, Do-S approaches Fubuki and tells the hero about her plans to lure Tatsumaki out. Enraged, Fubuki sends Do-S flying back. Before Do-S could get a hold of the situation, Fubuki uses Hell Storm, which slightly injures Do-S. As it turns out Fubuki did not succumb to the monster's mind control, Do-S changes her plans and decides to kill Fubuki instead of using the hero to lure Tatsumaki out. Fubuki tells Do-S that her sister would come anyway.[4]

Tatsumaki causes an explosion in the city where Do-S and Fubuki are fighting. Do-S realizes the mistake she has made and immediately tries to make an escape plan. A monster falls in front of Do-S asking for help and warns her of Tatsumaki. Tatsumaki finally arrives and immediately tells Fubuki to go home and that she will handle the rest. Do-S orders her love slaves to attack Tatsumaki as a distraction as she escapes. Tatsumaki immobilizes all of the love slaves, but Do-S manages to escape.[5]

Back in Monster Association Headquarter where Orochi executes Awakened Cockroach by devouring him mercilessly due to the latter's failure on defeating Genos, Do-S was about to be executed. Thankfully, she is spared on behalf of Gyoro Gyoro's request to Orochi.[6]

After the Monster Association managed to recruit the Hero Hunter, Garou, G5 joined into the organization’s ranks after capturing Narinki's Private Squad. Do-S prevents Royal Ripper from murdering the squad and proceeds to brainwash the squad members under Gyoro Gyoro's orders.

She later encounters Atomic Samurai's disciples and commands Narinki's Squad to fight them off until Sweet Mask intervenes and asks the disciples to leave so he can finish her off himself. Do-S is excited to meet Sweet Mask in person, remarking that he truly is handsome and offering to spend some alone time with him in exchange for freeing the Narinki Squad from her control. Sweet Mask quickly refuses, and moves to attack the Narinki Squad but is interrupted by the sudden return of Atomic Samurai's disciples. They defeat the mercenaries while Sweet Mask attacks Do-S, slamming her head into the wall. Sweet Mask leaves his guard down to speak to the swordsmen, so Do-S retaliates and lands a clean hit on his eye. However, it only seems to crack like a hard material, and Sweet Mask quickly crushes Do-S' head in a rage, her last thoughts being the realization that Sweet Mask is not human.[7]

Miraculously, Do-S is able to survive and regenerate using her tongue to absorb monster blood. Wishing for revenge, she sets off to recover the last of her "love slaves." However, she is disappointed when she finds that her only remaining love slaves are a group of weak, starved people showing minor monster transformations. Nevertheless, she brings the group as she goes to find Sweet Mask, hoping to make him her 1000th love slave. On the way, she runs into Fubuki (and Bang and Bomb) - and the two women are equally shocked to see each other once more.[8]

Fubuki claims her revenge on Do-S and prepares her attack. Do-S, however, takes her own love slaves as hostages, demanding Fubuki and the two brothers not to resist or the hostages will die. Do-S begins to imagine how her plan to make Sweet Mask her slave plays out, and attacks the three. As she launches her whip, she realizes that one of them is the S-Class hero Silver Fang. She and her entire love slaves are quickly incapacitated by Bang, with Do-S herself being tied up. She begins begging for mercy as Fubuki seizes the opportunity to take her revenge by hitting Do-S using her own whip. Upon awakening, all of Do-S' love slaves are freed from the brainwashing effects, even returning from their half-monster state to humans. Do-S is forcibly taken by Fubuki, Bang and Bomb, and is asked about Garou's location. She pretends to be under their control and answers the question by pointing at a nearby door, stating that Garou is behind the door. Fubuki suspects her, asking her if she is lying, which Do-S explains she is telling the truth and even has tried to make the Hero Hunter her love slave after his defeat against Orochi. She is angrily grabbed by Bang, who tells her to lead the way.

They enter a room with many torture devices, which Do-S claims the room to be hers. While the other three still observe the room, she takes a whistle on a nearby table, saying that it is used to summon the door which Garou is in before blowing it. Bang realizes something is wrong as the whistle makes no sound and he seizes it away from her, which Do-S then reveals that it is, in fact, a dog whistle and they were tricked, affirming that Garou is actually in a deeper room below. Overgrown Rover, somehow hearing the whistle, arrives and rampages, which Do-S takes the opportunity to flee. However, before she could escape, Fubuki attacks her with Hell Storm, causing Do-S to fall to an abyss.[9]

Mind Control: Do-S possesses the ability to control the minds of others. She achieves this by hitting them with her whip. Those who are controlled by her, have heart-shaped pupils and are referred as her "love slaves". However, people with strong willpower can resist this power. So far it seems that Do-S needed to strike her victims with her whip in order to control them or it just might be her preference. Gyoro Gyoro noted that this unique ability of hers would give the Monster Association more advantages if she was left alive.[10] It appears that if she loses her focus or is momentarily knocked unconscious, her victims will be freed.[11]

Enhanced Strength: Do-S possesses the raw power to send several people flying with just a crack of her whip.[12] Her whip attacks were noted to be very heavy by Fubuki.[13] Her whip attack eventually pierced through Fubuki's telekinesis when she was holding off Do-S's love slaves.[14] She was strong enough to pierce Sweet Mask's eye and damage his face with her tongue while he was caught off-guard.[15]

Enhanced Durability: Do-S was capable of withstanding the psychic attacks of Fubuki, while only gaining several scratches.[16]

Enhanced Speed: Do-S was able to escape Tatsumaki after using her love slaves as a distraction.[17]

Prehensile Tongue: Beneath the mask she wore Do-S has an elastic tongue through which she could launch surprise attacks with.[19]

Transformation: To a limited extent, Do-S also has shapeshifting abilities as she was capable of transforming her foot into a snake-like maw while coiling around Sweet Mask.[18]

Regeneration: Do-S is capable of regenerating from wounds by consuming blood. After licking up large quantities of monster blood, she could recover from the seemingly lethal injuries that Sweet Mask gave her.

Spiked Whip: Do-S wields a spiked whip that turned victims struck by it into love slaves, who are people that would blindly serve Do-S until they die, with a special stimulus.[20]

Dog Whistle: Do-S was able to procure a dog whistle which can be blown to summon Overgrown Rover. Fubuki noted that the whistle made no sound when Do-S blew it.[9]