Devil Long Hair (魔ロン毛, Maronke; Viz: Malong Hair) is a Demon-level Mysterious Being and a member of the Monster Association.

Devil Long Hair resembles a human with very long chestnut hair. His face and ears are decorated with vine-like design and his eyes are pure white. He dons a white attire with thigh-high black boots and black gloves. His jacket has many black embroilments and feathers giving him a rather flamboyant appearance. 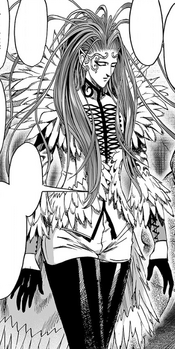 Devil Long Hair has always been obsessed with his hair, and precisely that obsession is the reason why he became a monster. He has a very unique speech pattern, as he always speaks in idioms that he sometimes modifies to always involve hair. He carries himself with an air of aloof vagueness.

He is particularly calm and was seen speaking to lesser monsters with no difficulty restraining himself from violence, whereas other high-level monsters often began infighting or cannibalizing each other during idle moments. He is also rather prideful, seemingly surrounding himself with lesser monsters. He tends to use many metaphors to mock his opponents.

In the past, Devil Long Hair was human but monsterized after growing his hair out and obsessing over proper hair care and management.[2]

At the Monster Association base, he explains to a fellow member how he became a monster by grooming his hair, giving it magical properties.[2]

Later, Devil Long Hair shows up against Atomic Samurai's three disciples, Iaian, Bushidrill and Okamaitachi. Upon seeing Devil Long Hair's attractive looks, Okamaitachi is immediately infatuated with him, but tries to resist it due to such a relationship being forbidden love. Okamaitachi's resolve quickly becomes clear, and she tells Devil Long Hair that she's unable to "reciprocate his feelings". The monster tells her that this news strikes him like "a bolt from the blue". The swordsman then prepares her Air Blade, only for Devil Long Hair to block the long-range attack with his hair.[3]

Being a Demon-level monster Devil Long Hair is a very powerful monster. He easily injured a top A-Class Hero and needed three of them to take him down. Even the heroes, who had excellent teamwork, barely managed to defeat him. However, it's unclear whether his power stems entirely from his hair alone, or if he has any other extraordinary physical abilities that have yet to be revealed. His hair doubles as both his greatest strength and weakness. He is defeated after Iaian, Okamataichi, and Bushidrill chop off all his hair, making him lose all his hair manipulation abilities and he falls unconscious after the battle.

Hair Manipulation: Devil Long Hair can manipulate his hair to lengthen and move as he pleases. They are extremely durable, flexible and quick as they were able to catch Okamaitachi's Air Blades[3] and tunnel through solid ground to launch multiple attacks from unexpected directions.[3] They are also capable of binding opponents, great piercing power, and are fast enough to catch top-ranking A-Class heroes by surprise. While Devil Long Hair has some durability to his hair, they are vulnerable to attacks and can break as seen when the three disciples of Atomic Samurai cut off all his hair.