King of the Seafolk

This article is about the character. For the chapter, see Chapter 24.

The Deep Sea King (深海王, Shinkaiō) was the ruler of the Seafolk. He was killed by Saitama.[3]

He is the main antagonist of the Sea Monster Arc.

In his dry form, the Deep Sea King was the most humanoid of all the Seafolk. He was a large, muscular being with dark-green skin on his arms, legs, and back and light skin on his chest and abdomen. He had sharp eyes, large fangs, and fins protruding from either side of his head. In place of eyebrows were small pink ovals. His attire consisted of a red speedo, an ornate crown, and a large fur-trimmed cape fastened in front with a fish-head-shaped clasp. He had heart nipples.

The Deep Sea King's hydrated form was much larger and imposing. He developed a dorsal fin running the length of his back and grew fins on his forearms and shoulders, and the fins on the side of his face grew larger. His skin turned aquamarine, and his face lost its humanoid appearance and became larger and more monstrous. 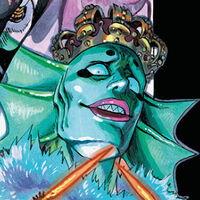 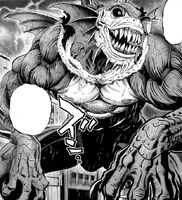 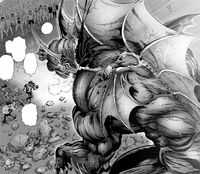 The Deep Sea King was a sadistic individual who enjoyed starting fights and inflicting pain upon others. He was determined to take the earth's surface for himself to rule. He regarded people as little more than food and had no qualms about treating them as such. He was also very arrogant and prideful, considering himself to be a superior being that stood atop the pyramid that consists of every living organism on the planet.[4]

After dodging away from Deep Sea King's attack, Sonic jumps off to a different building, but before he has a chance to do anything, Deep Sea King shows up. Deep Sea King then reveals that after he'd left the sea his body had shrivelled up, but thanks to the rain, he is able to return to his true form.[7] Sonic then attempts to run away, but Deep Sea King follows him and eventually catches him, and crushes him, or so it would seem. However, when Deep Sea King opens his hand only Sonic's clothes remain. Sonic then appears on a nearby roof naked, vowing that the next time the two would meet would be their last, after which he leaves.[7] Deep Sea King then decides to head out again.

Sensing a large number of life forms in the distance, the Deep Sea King heads out and finds J-City's evacuation center.[7] The Deep Sea King then smashes his way through the wall of the structure with ease, but before he can do anything C-Class hero All Back-Man steps forward to attempt to negotiate with the Deep Sea King.[7] The Deep Sea King is amused by the hero's attempts, stating that the only thing he really wants is to hear some really nice death screams.[7] At this point, All Back-Man loses it, wets himself and is about to completely break down when the heroes Jet Nice Guy, Bunbun Man, and Sneck step forward to help buy some time for higher-ranked heroes to arrive.

Jet Nice Guy charges forward to attack but Deep Sea King quickly dispatches him.[8] Sneck then orders the remaining heroes to attack on count of three but before Sneck can finish the count Deep Sea King attacks, quickly defeating Bunbun Man and All Back-Man with the first strike and Sneck, having dodged the first attack, is taken out by the second.[8] Boasting and laughing over the fallen heroes, Deep Sea King is then met by an enraged Genos, who delivers a devastating blow to the Deep Sea King's face, launching him out of the shelter and through several buildings.[9]

Furious, the Deep Sea King returns and catches Genos off guard with a destructive punch to the head whilst also holding onto Genos's arm, ripping it from his body.[9] Genos, worried that he might not win, orders all of the remaining civilians to evacuate the shelter, but Deep Sea King exclaims that all humans are his prey and that none will escape.[9] Deep Sea King is then met with a powerful kick from Genos but he is prepared for the attack and he simultaneously retaliates with a punch.[9] The Deep Sea King and Genos then trade blows for some time until a little girl who was evacuating yells back to Genos, urging him to hang in there. Upon hearing this, an annoyed Deep Sea King spits acid at the child, stating that brats should keep quiet and melt away.[9] Left with no other choice, Genos throws his body into the path of the acid spit, saving the little girl but damaging his body greatly. Taking advantage of this, the Deep Sea King grabs Genos by the head and throws him into a nearby wall and then quickly follows-up with a devastating punch that sends Genos through the wall and out onto the street.[10]

The Deep Sea King makes a cameo appearance when talking about disaster levels.[11]

Dr. Kuseno develops the Virtual Genocide System (VGS), a piece of headgear that reads brainwaves and simulates battles between the wearer and monster data stored in the VGS. Genos uses these simulated battles to gauge his abilities and gain experience.

Genos simulates a fight with the Deep Sea King in his hydrated form and defeats the monster with Machine Gun Blow and Incineration Cannon.

Deep Sea King is a playable character in the video game, One Punch Man: A Hero Nobody Knows.

Even after the Deep Sea King's passing, Puri-Puri Prisoner and Lightning Max's defeat at his hands still serves as motivation for them to become stronger. Losing to him is also what made All Back-Man quit the Hero Association. The last of the seafolk Lord Great White proclaimed himself the new Sea King and attempted to avenge his comrades, before being stopped by Saitama. After his and the Subterranean King's deaths the Ancient King attempts to take the surface for himself before being killed by Tatsumaki. At the Super Fight Tournament, Max reminiscences back to how the Deep Sea King was stronger than him, which motivated him to become stronger as well. Following on from Deep Sea King's advice, Puri-Puri Prisoner develops the Dark ☆ Angel ☆ Rush technique, which aims each punch with the intent to kill.

The Deep Sea King was a very powerful Mysterious Being, able to fight on par with and defeat a few S-Class heroes, albeit low-ranked ones. Puri-Puri Prisoner, the lowest-ranked S-Class Hero, was no match for the Sea King.[7] However, according to the VGS (Virtual Genocide System), Deep Sea King in the rain would be defeated in two attacks by Genos who has upgraded himself after his defeat against the Sea King.[12] Additionally, after his training, Puri-Puri Prisoner could eliminate a monster as strong as Deep Sea King with a single string of punches with killing intent behind them, while Superalloy Darkshine can destroy a monster as strong as Deep Sea King with just a light touch.[13] Zombieman, however, would've had trouble in defeating a monster like him.[14] The Deep Sea King is on the same level as the Subterranean King and the Sky King.[15]

Water Empowerment: When his body is hydrated enough, his form changes to that of his natural state. In this form, he is much larger and more monstrous. However, certain attacks (like those delivered by Genos) or long periods of dryness cause him to exit this form.

Immense Strength: The Deep Sea King boasts an extreme amount of strength seen as how he was able to dispatch two A-Class heroes with minimum effort. In his weakened state, he is able to greatly damage and send Puri-Puri Prisoner, an S-Class hero, flying towards a building a great distance away. He was even able to tear apart Genos's cybernetic body. However, in his dry form, he was unable to land any decisive blows on Genos, despite the hero only having one arm, until he used his acid spit.

Body Moray (体内ウツボ, Tainai Utsubo): He can release a long eel-like creature from his mouth that he can use to bite and tear into opponents with. According to the Deep Sea King, the creature will not go away once it latches onto his enemies. Its full capabilities are unknown, and its maximum length is also unknown.

Immense Durability: The Deep Sea King has incredible physical might, being able to easily withstand the attacks of several heroes ranging from C-Class to S-Class with little damage, despite them occurring one after another with little rest in between. In his dry state, he is able to tank the powerful strikes of the S-Class Hero, Puri-Puri Prisoner, head on without taking much visible damage, alongside the attacks of Speed-o'-Sound Sonic (an S-Class Villain) and the S-Class hero, Genos. Even after having his Moray cut off, he showed no visible signs of pain.[7]

Immense Speed and Reflexes: The Deep Sea King boasts an exceptional amount of raw speed, seen when he was able to appear behind Lightning Max instantaneously, catching the A-Class hero off-guard and struck Stinger (another A-Class Hero) before the latter could react.[16] However, he was shown to be outmatched against Sonic in terms of speed and could not land a proper hit on the ninja until he entered his true form. Along with this, his dry form was shown to be about on par, if not slightly below, the level of Genos.

Regeneration: While shown to be highly resistant to attacks, the Deep Sea King is capable of recovering from his injuries at an extreme rate, as seen when an injury he received from Genos, an S-Class hero, healed while they were still fighting. However, this ability does have limits, as a powerful blow can kill him before he has the chance to regenerate.[17]

Acid Spit (溶解液, Yōkai-eki): The Deep Sea King could shoot acidic spit from his mouth. It was able to melt Genos's metallic body almost completely. The spit is a lysis solution that also breaks down the membrane of cells.[2]

Enhanced Senses: Deep Sea King appeared to be able to sense people's presence in every direction, even if distant.[18][19]

Expert Hand-to-Hand Combatant: The Deep Sea King was shown to be a very skilled combatant capable of defeating two S-Class heroes, and seemed to have lots of combat experience, as seen when he lectured Puri-Puri Prisoner on how to fight properly, by putting much more effort into attacking an opponent with more intent to kill. He also seemed to have a preference for combo attacks, attacking his opponents mostly with a barrage of punches.