Death Gatling is a young man with black unkempt hair and a cross-shaped scar on the left side of his face. He wears a white cloak, a black leather outfit with many belts attached, and has a Gatling gun in place of his left arm. 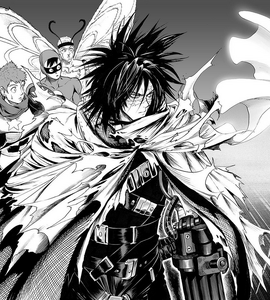 Death Gatling is a very strategic fighter. This is shown in his fight against Garou as he anticipated how Garou would fight and selected a team of fighters varying from close-range fighters to long-range marksmen in order to capture him.

He is very concerned about the perception of lower-class heroes. He constantly worries that no matter how much effort lower-class heroes put into their jobs, they are going to be viewed lower than the S-Class heroes. This leads him into fights against opponents that are more powerful than himself to prove his worth as a hero.

The hero catalog describes his prowess in battle as a hero who can exterminate monsters without giving them a chance to fight back and that a lorge horde of enemies poses no threat to him. Death Gatling is also known for having the power to turn the tides of the battle by himself.

Death Gatling is seen working with Butterfly DX and Bone in a fight against the Hundred-Eyes Octopus, but all three heroes are easily defeated.[2]

Death Gatling later gathers a group of five heroes to attack the Hundred-Eyes Octopus. This group is stopped by Flashy Flash, who says their group is mediocre, and will only result in the monster's enragement, causing more damage to the surroundings.[3]

After Flashy Flash proceeds to blind the monster by slicing all of its eyes, the monster squirms in pain, destroying even more infrastructure nearby. Death Gatling tells everyone to retreat and saves Red Muffler from one of the monster's falling tentacles.[4] For the rest of the fight he is able to do nothing but watch as Flashy Flash and Tatsumaki argue about the monster.[5]

While hunting for remaining monsters, Death Gatling notices Garou trailing him. Instead of attacking the hero, Garou retreats, thinking he may not be able to fight the hero due to the damage sustained from Saitama's kick.[6]

Death Gatling later tracks Garou to a small hut in a park and leads a team of A and B-Class heroes to capture him.[7] Initially, the group gains the upper hand against Garou, due to his injuries. However, Garou turns the table on each of the heroes by using their own weapons and attacks against each of them. After a fierce fight, Death Gatling is the only one left standing. He tells Garou that Garou is no longer a human in his eyes, and that capturing him alive is not necessary anymore.

He then unleashes his Death Shower in an attempt to kill Garou. However, Garou deflects the spray of bullets using Water Stream Rock Smashing Fist, in order to prevent it from hitting the hut behind him and the child inside. Garou then remarks that Death Gatling and his companions had decent strategy and cooperation, but weak individual strengths, and that the situation would have been very different if an S-Class hero were present.

This remark damages Death Gatling's pride, and he draws his knife in a futile attempt to defeat Garou and prove that the existence of lower-class heroes isn't meaningless. Garou then attacks Death Gatling, breaking his gun in the process.

As a high-ranking A-Class hero, Death Gatling is a very skilled and powerful fighter. Despite ultimately being defeated by Garou, he was able to seriously injure the Hero Hunter alongside a team of other A-Class and B-Class heroes.

Enhanced Stamina: Despite always carrying a heavy Gatling gun attached to his arm, he shows no signs of fatigue.

Enhanced Durability: Death Gatling was able to survive the collapse of a tall building with little to no damage[8] despite being on top of it.[9]

Enhanced Strength: Not only is he always carrying a heavy gun but he can fire it constantly without feeling the recoil, showing that he is far stronger than trained top army soldiers.

Enhanced Reflexes: Despite not being a close-range fighter he could react to Garou's attack by putting his gun in front of it, a feat none of his colleagues could accomplish despite them being used to fighting in close range. Unfortunately, his gun was not durable enough to block Garou's punch and he got knocked out afterward .[10]

Expert Marksman: Death Gatling is extremely skilled in wielding the Gatling gun. He displays a strong sense of precision and control when using it.

Gatling Gun: Death Gatling has a high-powered Gatling gun in place of his left arm that acts as his primary weapon. It is noted that it shoots faster and has slightly larger rounds than a normal Gatling gun. Bullets from the Gatling have been shown strong enough to blast through trees, cutting them down.[13]

Bowie Knife: Death Gatling carries a bowie knife off-hand as a secondary weapon.[14] His skill with it is unknown, as he was defeated by Garou before he had a chance to use it.