Ben Lepley
Darkness Blade (ダークネスブレイド, Dākunesu Bureido) is a B-Class professional hero of the Hero Association who was previously Rank 50.

Darkness Blade is a tall young man. He has fairly long, unkempt hair and a large, X-shaped scar on his right cheek. He has narrow eyes with dark circles under them. Darkness Blade dressed in black, decorated armor with many spikes and scales. Around his waist, he carried a black buckle with the scabbard of his sword attached.[2] 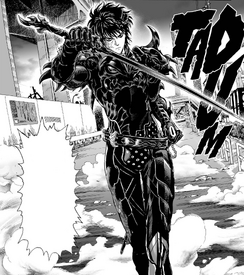 Darkness Blade has an intimidating aura and is confident in his own strength. He speaks in a very sophisticated way, almost poetic and very heroic, but as commented on by Red Muffler, sounds pretty stupid.[2] He has also shown during the Hero Costume Contest to be quite verbose in describing himself.[2]

When the 170,000-Year-Old Cicada Nymph attacks Z-City, Darkness Blade, Red Muffler and Grad School Graduate arrive to fight the monster but struggle to defeat it, so Darkness Blade orders them to fall back and spouts some heroic, though stupid-sounding words. His words were in vain since the three heroes were quickly defeated by the creature and had to retreat to Shelter 7 all beat up, where they were booed at by the bystanders.[2]

Darkness Blade and a few other heroes fight against Do-S, but end up becoming her love slaves, before being knocked out by the Blizzard Group.[3] While under Do-S' mind control, he was attacking Fubuki with the rest of the mind slaves,[4] but was immobilized by Tatsumaki, who smashes him into a wall.[5]

Appearances in Other Media[edit | edit source]

More than one and a half years after becoming a hero, Darkness Blade participates in the first Hero Costume Contest but was given a score of 16 out of 30. Later Game-Berus attacked the contest area and Darkness Blade tried to fight it, but is pushed away and defeated in one attack and his armor broken.[6]

Darkness Blade was among the many heroes summoned by McCoy to combat the monster that was devastating the Z-City police station. He arrives at the scene late, after Saitama has already killed the monster.[7]

He and other heroes tried to stop Jumping Spider together but were easily blown away by the creature because of a misunderstanding of the monster's real capability.[8]

Red Muffler stated that Darkness Blade is a promising rookie, over one and a half years before present events. Darkness Blade had also professed to be proficient in calligraphy and playing piano in the Hero Costume Contest. Okame-Chan estimated his body strength to be stronger than Red Muffler and the top half of Jumping Spider, but weaker than A-Class heroes and a bear.

Retrieved from "https://onepunchman.fandom.com/wiki/Darkness_Blade?oldid=193521"
Community content is available under CC-BY-SA unless otherwise noted.