Tom Fahn
Crablante (カニランテ, Kanirante) was a Tiger-level Mysterious Being. He was originally a human but transformed into a crab monster after eating too much crab. He was killed by Saitama.[3]

Crablante was a large humanoid crab-esque creature. His upper body was that of a crab, with large claws and a bright-red carapace. His lower body was that of a naked muscular human male, and he wore a pair of white briefs. He had two nostrils, a large mouth, and two eyestalks that protruded from the sides of his head, ending in large, elliptical eyes with small pupils.

In the manga, his chest possessed a yellowish coloration that matched those of some crabs. 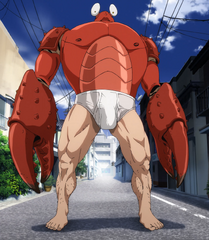 Crablante seemed to have turned into a bloodthirsty monster after his transformation, massacring several people on his search to kill a boy who had vandalized his body with a permanent marker. He was proud of his "beautiful body" and turned very aggressive when anyone defiled it.[4] He did, however, show compassion to a depressed, pre-training Saitama, saying that he would not harm someone who has the same "lifeless eyes."[5] When talking, he occasionally adds 'Blubblub' and 'lol' to the beginning and the end of his sentences.[6]

Three Years Before The Main Storyline[]

Crablante meets Saitama three years before the main storyline in the middle of a street. Crablante's appearance causes everyone apart from Saitama to flee in terror. When Crablante asks why Saitama is not also running away, Saitama causually replies that since he is unemployed and unable to get a job, he feels that nothing matters anymore and that he does not feel as it even matters if he runs away. Crablante chuckles at this and says that, since he is after a different target and since Saitama's lifeless eyes remind him of his own, he is willing to spare Saitama.[5]

Crablante later appears in a park and discovers a ball-chinned kid, his target. As Crablante is about to finish the boy off, Saitama rushes in and saves the boy. It is revealed that Crablante wants revenge on the kid for defacing his body while he was sleeping in the park by drawing nipples on his chest in permanent ink. Crablante demands that Saitama either surrenders the boy or dies himself. Hearing this, Saitama bursts into a fit of laughter and quips that Crablante reminds him of a villain from an old anime that he used to watch in his childhood (possibly Crab Demon from "Justice Man"). Saitama reveals that his childhood dream was to become a superhero who could defeat villains like Crablante in a single punch. After a brief but intense fight, Saitama defeats Crablante by pulling out an eyestalk along with his internal organs, disemboweling the monster.[7]

He makes a cameo appearance when talking about disaster levels.[8]

Crablante is a playable character in the video game, One Punch Man: A Hero Nobody Knows.

Crablante's Disaster Level was "Tiger" for posing a threat to civilians. Since pre-training Saitama ultimately defeated him, it can be said that he was relatively inexperienced with combat in both offensive and defensive areas compared to other Mysterious Beings.

Enhanced Strength: Crablante possessed enhanced strength, easily beating up an untrained Saitama, slaughtering several other people, and creating cracks in the ground. He could destroy asphalt with his claws.[2]

Cancer Eyes (キャンサーアイ, Kyansāai): Crablante's eyes had a wide field of view, but the stems are linked to his organs making them his weakness.[2]