Choze (チョゼ, Choze) was a martial artist and user of the Fist Of The Pure Blood Master Race.

After eating a monster cell offered to him by Gouketsu, Choze became a monster and joined the Monster Association. He was killed by Suiryu.[1]

Choze was a tall man (Saitama, who stands 175 cm, apparently only reaches his chest).[2] He had light-colored eyes and hair that parted on the left side. He wore a red turtleneck with a checkered pattern, black gloves, and white pants. He also seemed to be missing eyebrows.

After eating a monster cell and becoming a monster, Choze underwent multiple changes in his appearance. In addition to looking more demonic and growing horns, he grew spikes on his shoulders and forearms and his hands became black with spiked fingers. His head and body seemed to blend with his attire, mimicking the color and checkered pattern of his red turtleneck.[3] 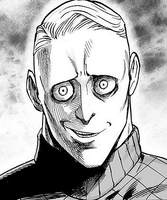 Choze's previous appearance as a human 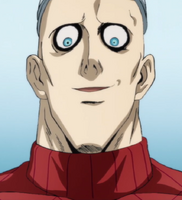 Choze's full appearance as a monster 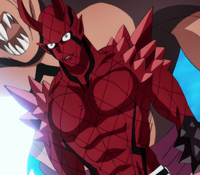 Choze was an arrogant and racist man who looked down on others. During combat, he was quite vicious and bloodthirsty, comparable to Bakuzan, as he often beat his opponent to the verge of death. During the Super Fight, Choze claimed that the only reason he did not finish off his opponents was because of the referee's interference, implying that he enjoys killing people. He was shown to be extremely sadistic, to the point where the screams and tears of his opponent were merely "fun" for him. At the same time, he also tended to kill his opponents just for the sake of testing power; an example of this is when he mercilessly snapped Rosie's neck just to test the Monster Cells' effect on Rosie's body.

Furthermore, he also had the mindset of a supremacist, since he often thought that with the most exemplary genetic material and most careful genetic breeding practices, he and his clan were superior to the rest of the normal and feeble population of the earth. As a result, he arrogantly announced that he and his clan would someday rule the world just because they have superior genes and that the tournament was the perfect opportunity to show his supremacist ideal to the world. His self-confidence also extended to the fact that, despite witnessing Saitama and Suiryu's overwhelming displays of power in the finals, he was still confident enough to take time to relax and brag about his power before deciding to kill both of them.

However, his extreme arrogance was also his undoing as he focused too much on his supremacist philosophy, and as a result, he foolishly let his guard down and was easily defeated with only a single punch by Saitama, who found him very annoying.

After becoming a monster, his arrogance increased exponentially, and he thought that with his newfound powers, he could easily kill Saitama in his new monster form. This shows that his superiority complex was so great that he was unable to learn from his mistakes. This would ultimately lead to his second undoing at the hands of Suiryu, who, similarly to Saitama, Choze underestimated despite witnessing the martial artist having defeated several other monsterized martial artists. He admitted that his already depraved morality as a human deteriorated to non-existent after his transformation, with him brutally attacking Jakumen to test his newfound strength. Furthermore, his supremacist view also became more extreme from the insanity caused by his monster form ,since he thought that the original plan of his clan and his past human self to rule the earth was worthless. Consequently, he vowed to slaughter every living human on the planet, while only leaving a few worthy individuals selected by him to live.

He belongs to a clan of people who are dedicated to creating genetic perfection and purity in an effort to create a master race. He was bred to be the perfect human under his clan.[4]

Choze made an announcement during his campaign that he views poorly of the other contestants and caused a sensation. Choze is participating in the Super Fight Tournament in C-City at the C-City Super Stadium for the first time.[5] While watching the match between Max and Suiryu, he was shocked by the latter's strength, where Max was effortlessly defeated by his opponent.[6]

He easily defeats Mentai in his first match, surprising the audience and the crowd with his overwhelming power. Choze is mentioned to have said that he feels that he is the true front runner in the tournament.[7] In the second match, he viciously defeats Dave to the verge of death.[8]

During his fight against Saitama, Choze gabs endlessly about his genetically superior view during the fight and eventually foolishly lets his guard down, which causes a bored Saitama to send him flying to silence him. According to Saitama, ultimately, no matter how pure or superior his genetics were, at the end of the day, he was still just a mere human.[9] Choze is later present at the closing ceremony, when it is suddenly interrupted by The Three Crows and Gouketsu, who threatens to kill them unless they choose to become monsters.[10]

Later, he kills Rosie, who had just recently become a monster himself having consumed one of the Monster Cells. Afterwards, Choze, thinking that "for someone who has the finest genes in all of humanity who aims for the ultimate power," eats a monster cell himself. Following his transformation, he attacks Jakumen just for the sake of testing his newfound strength. During this time, he vows to kill Saitama for humiliating him by punching and sending him flying while yawning.[11]

After Suiryu takes down several transformed martial artists, Choze battles Suiryu evenly to the point of causing Suiryu to struggle to fight him. After a few exchanges of blows, Choze eventually uses his Inferior Race Annihilation Shot in an attempt to kill Suiryu, only for the latter to manage to deflect it into the sky with his kick. Seeing the danger of Choze's power, Suiryu rushes towards him and breaks his horns before engaging in a fast exchange of hits until Suiryu initiates the Void Shaking Tiger Fist technique on Choze's belly, which causes him to heavily cough blood. Immediately after, Choze is finished off by Suiryu, who unleashes his Void Phoenix Ascension Fist on him, finally defeating Choze.[12]

Choze was strong enough to brutally defeat Mentai and Dave with ease in their respective matches without suffering a single injury. As a human, he was able to easily snap monsterified Rosie's neck.

Upon transformation into a Mysterious Being via a monster cell, Choze's power increased greatly, to the point where he was able to make Suiryu struggle in their fight, being the first person to cause Suiryu to bleed in a while. Additionally, their fight was so fast that the other Super Fight contestants' eyes could not keep up with their movements.[13]

Energy Projection: After becoming a monster, Choze gained the ability to produce energy.

Immense Strength: Choze possessed superhuman strength as he brutally defeated other strong martial artists in the Super Fight tournament with little to no effort.[15][16] He often implied that his superhuman strength was the result of careful breeding techniques used by his clan. He was strong enough to fully twist Rosie's neck when the latter was in his muscular monster form.[17] After transforming into a Mysterious Being, his strength increased to the point where a single punch was enough to send a muscular human flying out of the stadium.[18] He was also capable of trading blows with Suiryu, with the latter even saying that Choze was a decent fighter and the first person in a while to make him bleed.[19]

Immense Speed and Reflexes: Choze was very fast and agile. As a human, he was able to quickly get behind Rosie and snap his neck before the latter could realize what just happened. As a Mysterious Being, Choze was capable of clashing evenly with Suiryu and keeping up with him throughout most of their fight. Their speed was so fast that the other contestants were not able to follow their movements.[20]

Immense Durability: Choze was quite durable. He managed to resist several of Suiryu's attacks, which were capable of defeating every other monsterified tournament participant with ease apart from Bakuzan.[21]

Longevity: Like any human who had eaten a monster cell, Choze gained a longer life span.[22]