Todd Haberkorn
Charanko (チャランコ, Charanko) is a martial artist and a former student of Bang.

Charanko has messy, light-colored hair and wears a white karate gi. He also boasts a muscular frame, although this is hardly indicative of his strength, or lack thereof. 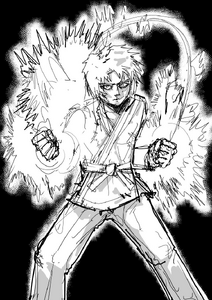 Charanko's extended appearance (drawn by ONE)

Charanko is a loudmouthed braggart, arrogantly challenging Saitama and Genos for their disinterest in Bang's martial art. He is ignorant of their ability. When Saitama comments on Bang's strength, Charanko speaks out again, eagerly describing his master's martial arts ability as well as his hero rank, only to be quickly silenced by his master's reprimand. Charanko likes pretty women and dreamt about saving them.[2]

It is revealed that he is in fact rather vain and selfish, as he only joined Bang's Dojo in order to become more popular.[3] When sparring with Garou back when the hero hunter was training in Bang's dojo, he immediately recoiled back upon seeing Garou throw a punch. Garou decided to pull his punch back, declaring him too weak to even be a punching bag. The hero hunter asked him what he would do if Garou was a monster, and Charanko replied by saying he would cry, beg and do anything to be spared, disgusting Garou. From that point on, Charanko became even less motivated to the point of almost ending his training, but after hearing about Garou's rampage, which caused all of Bang's other disciples to quit, he found his motivation again and decided to start his training again.[4]

Despite his flaws, Charanko is not a bad person, as he shows great respect and admiration for his master and would do anything to defend his honor and that of his dojo. Charanko holds a sense of martial art's honor towards any fellow dojos which his former fellow disciple, Garou, destroyed. Upon finding out why his master "expelled" him after hearing about Garou's comeback as the "Human Monster", he decided to attack him to avenge his master's honor, despite Bang's warning. This proves that, in spite of his initial cowardice he was in fact very brave as he attacked Garou after the Hero Hunter had already beaten many heroes in front of him including the S-Class hero Tanktop Master. This act of courage was enough that even Saitama defended Charanko to a former disciple of Bang, Sour Face. After being easily defeated by Garou however, he becomes a bit more humbled.

Charanko is a great fan of King and was excited to see him visiting Bang's dojo. His view of King is rather exaggerated, however, as he sees King as a god and "a man beyond reality" and was greatly shocked when King confirmed that this is not true (although his reaction actually came from a misinterpretation of King trying to confess the truth about himself to Bang).

Charanko requested an apprenticeship at Bang's dojo with the hope of becoming popular with girls. Charanko became one of Bang's many students along with Sour Face and Garou, but was lowest in rank and was tasked to wipe the floor and feared his superiors. One day, Garou decided to spar with Charanko, but Charanko immediately objected, saying that he was only a white belt. Garou was undeterred and insisted Charanko attack him. Charanko continued to reject a real sparring match, and in anger, Garou threw a punch. Charanko screamed and recoiled, yet Garou pulled his punch at the last second. The 17-year old mocked Charanko's weakness and asked him what he would do if Garou was a monster. Charanko's response was that he would cry, beg and do anything to be spared. Garou was visibly disgusted and told him to get out of his sight.[5]

Charanko then decided to quit the training since he didn't feel any stronger. As he entered the dojo, he noticed Bang wiping the floor. When Bang proposed to train, Charanko asked where the other trainees were. After hearing they all quit, Charanko became Bang's top and only disciple, which motivated him to keep training.[6]

Charanko, along with King, makes a cameo when Hammerhead throws a rock and destroys the dung-shaped figure atop Zeniru's building and screams in surprise at the action.[7]

Charanko appears when Bang demonstrates Water Stream Rock Smashing Fist to Saitama and Genos and becomes enraged at their dismissal of the martial art, challenging them both, but is quickly subdued by Genos. He then boasts about his master's strength when Saitama notes it, only to be cut off by said master, who reprimands him for speaking out of turn. When the S-Class heroes are called to the Hero Association Headquarters, Charanko is left in charge of the dojo.[8]

While training with his master, Charanko feels that Bang is not behaving as usual. Later, Charanko is expelled from the dojo because Bang does not want him to be caught in the crossfire in his hunt for Garou. However, Bang gives the excuse that he had been holding him back for the past half a year and had not been doing anything. He later visits Bang's allies at Saitama's apartment to spread the news about his master's sudden change in attitude. Not only is he surprised that Saitama and Genos gained more allies, like King and Fubuki, but he also finds out that Bang's strange attitude is because of his former disciple, Garou, who is starting his hero hunt and is a large threat, being considered a human monster.[9] Ignoring his master's warning, Charanko foolishly rushes Garou to avenge Bang and his dojo's honor, right after the Tank Topper Army and Mumen Rider are defeated. His master Bang arrives too late to catch Garou and somberly witnesses his disciple's beaten state.[10]

Charanko survives the attack and is next seen in the Hero Association Hospital, heavily bandaged and with his leg and an arm in a cast. Saitama visits him to get advice on martial arts and Charanko advises him to start with the basics and see Bang, but Saitama refuses to impose due to Bang's old age. Charanko then takes out his ticket for the Super Fight tournament so that Saitama can go and observe various martial arts styles for himself, cautioning him not to disguise himself to enter the tournament, but his words go unheeded.[11]

Charanko is still recovering at the hospital when it is suddenly attacked by a Mysterious Being.[12]

Charanko is shocked to hear that everything he knows about King is all a lie.[13]

Charanko is recovering at the hospital. He tries to impress one of the nurses there, but her attention is quickly diverted to Suiryu, who is walking around in the hallway on one hand. After seeing this, Charanko becomes disheartened and gives up on impressing the woman.[14]

Charanko seems to possess martial arts abilities but is never seen demonstrating them. It can be inferred that his martial arts skill is weak or relatively insignificant, as Genos was able to overpower him instantly, upon which he surrendered.[15] Furthermore, he failed to land a hit against a wounded Garou after attempting to assault him and was severely beaten afterward.[16]

Martial Artist: Charanko became a martial artist under the guidance of Bang.