Carnage Kabuto (阿修羅カブト, Ashura Kabuto) was an artificial mutant created by Dr. Genus and the strongest creation of the House of Evolution. He was killed by Saitama.[2]

Carnage Kabuto was a massive being, towering over both Saitama and Genos. He was humanoid, but his body had many characteristics resembling a rhinoceros beetle, including a thick exoskeleton, a pair of wings encased by elytra, and a large horn on his head, similar to that of a rhinoceros beetle. He had huge spikes on his arms and legs. His body was mostly brown in color.[3]

In Carnage Mode, Carnage Kabuto's body grew larger, he shed his carapace, increased the size of his muscles and also grew a larger and sharp horn. His entire body turned from brown to purple and green in color with his eyes turning all red and all of his teeth becoming sharp.[3] He adopted a more humanoid appearance in this state. 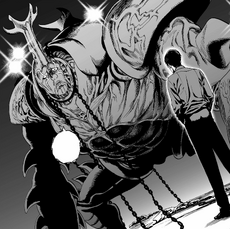 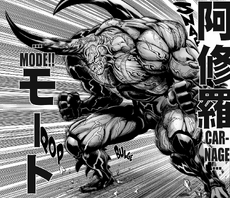 Carnage Kabuto after transforming into Carnage Mode in the manga.

Carnage Kabuto was an extremely mentally unstable being. Although he was extremely intelligent, his insatiable thirst for blood prompted Dr. Genus to lock him away deep underground. He considered himself far superior to humans, calling himself the 'new human' that Dr. Genus was looking for, and believed that all should submit to him. He was very sarcastic, ill-tempered, and lacked humanity, which Dr. Genus considered to have been his main flaw.[4]

Carnage Kabuto also had an impressive natural survival instinct, which alerted him of Saitama's strength and quickly jumped away, which surprised Dr. Genus. He showed great fear of Saitama for a while, though upon hearing his lame backstory, Kabuto's headstrong nature ultimately won out and he attacked anyways.

When Saitama and Genos arrive at the House of Evolution's secret base and subsequently destroy it, Dr. Genus decides that the only way to stop them and gain a sample of Saitama's DNA would be to unleash Carnage Kabuto. After killing many of the clones, Dr. Genus releases Carnage Kabuto, begging him to get Saitama's body at any cost. Carnage Kabuto taunts Dr. Genus, saying that he is far more superior than them, but led by his desire for combat and killing, Carnage Kabuto accepts.[5]

After Saitama and Genos have entered the lair, Carnage Kabuto is seen running down the hallway carrying Genus. After asking him which of the two is Saitama, Kabuto drops Genus and smashes Genos into the wall of the tunnel, embedding his torso and head into it. Kabuto then challenges Saitama to a fight in a nearby chamber, and he agrees based on the fact that Carnage Kabuto made Genos look like "modern art". Carnage Kabuto and Saitama get to the chamber and the fight is about to start when Genos, from the doorway, blasts Kabuto with a large wave of fire. Genos then rushes towards Carnage Kabuto and uses his Machine Gun Blows ability, which has no visible effect on Kabuto. Kabuto then throws a single punch at Genos and smashes him to the ground, breaking apart the left side of his face.[6]

Genos, after recovering from the blow, attempts to shoot another fire blast at Carnage Kabuto, but Kabuto blows on it and sends it right back to Genos, causing his hair to puff up into an afro. Saitama finally steps in to fight and Carnage Kabuto rushes in and is about to smash Saitama, but he senses his aura and jumps back across the room, revealing that he was able to tell that if he had attacked that he would have died. In fear, he asks Saitama why he's so strong. Saitama agrees and tells Kabuto and Genos how he became that strong, and reveals his infamous training technique. Carnage Kabuto believes that Saitama is making fun of him and goes into what he calls "Carnage Mode," a form that makes him much larger and alters his appearance greatly. Carnage Kabuto says that he will stay in this form, rampaging until next Saturday. Dr. Genus looks at this in dismay, knowing that Carnage Kabuto's Carnage Mode cannot be stopped. Carnage Kabuto then proceeds to attack Saitama ruthlessly, smashing him around the room, until Saitama realizes that it's Saturday and not Friday and that he might have missed the special sale at the market and proceeds to punch Carnage Kabuto so hard it disintegrates the middle of Kabuto's chest, neck and head, marking the sudden end of Kabuto.[7]

Dr. Kuseno develops Virtual Genocide System (VGS), a headgear that reads brainwaves and simulates battles between the wearer and monster data stored in VGS. You picture how you fight in your head and VGS will carry it out in the simulation, the resulting battle is visualized on an external monitor. Genos uses these simulated battles to gauge his abilities and gain experience.

Carnage Kabuto is simulated by the device and is fought by various heroes. Genos is defeated in every battle with the monster. Seeing an opportunity to gauge his strength as well as the monster's, Genos calls on various heroes to use as a reference point. Sneck, Metal Bat, Zombieman and Superalloy Darkshine respond to his request. They battle with the simulation monster. Carnage Kabuto would beat Metal Bat without fighting spirit in three minutes. Metal Bat complains the device didn't simulate his fighting spirit and he can actually battle longer if the fight had occurred in reality. Carnage Kabuto in Carnage Mode would lose to Superalloy Darkshine in fifteen minutes. Carnage Kabuto in Carnage Mode would lose to Zombieman in a week after exhausting himself from Carnage Mode. Sneck is defeated in 2.52 seconds.

Carnage Kabuto is a playable character in the video game, One Punch Man: A Hero Nobody Knows.

Being the strongest warrior of the House of Evolution and a Dragon-level threat, Carnage Kabuto boasted tremendous speed and physical strength. He was shown to be strong enough to defeat Genos easily, repelling his power blast with just a forceful breath. He was also said to be highly intelligent, but his unstable personality caused Dr. Genus to dub him a failure. Prior to fighting Gouketsu, Genos considered Carnage Kabuto the strongest opponent he ever faced.[1][8] According to the VGS, Carnage Kabuto was able to defeat many A-Class and S-Class heroes; he defeated Sneck in 2.52 seconds, and Metal Bat in around 3 minutes, although Metal Bat claims the VGS did not properly simulate his fighting spirit, and Kabuto effortlessly thrashed Genos in only two hits despite the cyborg being already upgraded after the fight with Deep Sea King. However, he was defeated by Superalloy Darkshine even in Carnage Mode after 15 minutes.[8]

Immense Strength: Being a Dragon-level threat, Carnage Kabuto possessed immense strength, able to badly damage Genos with little effort.[9] He was also able to destroy a great deal of the fighting room and hold his own against an all-out Superalloy Darkshine for 15 minutes while in Carnage Mode.[10][8]

Immense Speed and Reflexes: Despite his enormous size, Carnage Kabuto boasted exceptional speed, as he was able to move at the speed that surprised Genos and landed multiple punches on Saitama in a short amount of time.[11][12] In the VGS, Carnage Kabuto was also fast enough to quickly defeat Genos in two hits without the cyborg hero being able to properly counter.[8]

Immense Durability: Carnage Kabuto possessed immense durability, as seen when multiple clones of Dr. Genus shot him with automatic rifles and he remained totally unfazed by this.[13] He was capable of withstanding Genos' fire attacks and his Machine Gun Blow technique without a scratch.[14] Additionally, Carnage Kabuto managed to last 15 minutes against a fully powered Darkshine, a very powerful S-Class hero.[8]

Immense Stamina: Carnage Kabuto possessed superhuman stamina. After transforming into Carnage Mode, he lost control, going berserk and rampaging for one week straight before finally running out of stamina.[2][8]

Flight: Carnage Kabuto has wings hidden beneath his sturdy shell and used them to fly away from Saitama in fear.

Keen Instincts: Thanks to his instincts, Carnage Kabuto was able to sense the strength and threat of his opponents. This proves useful to him when he senses Saitama's power and stalls his death a while longer.

Expert Hand-to-Hand Combatant: Carnage Kabuto was the strongest specimen of the House of Evolution.[15]

High-level Intellect: Carnage Kabuto was presumably an extremely intelligent being, as he claimed that his intellect far surpassed that of the human race.[17] 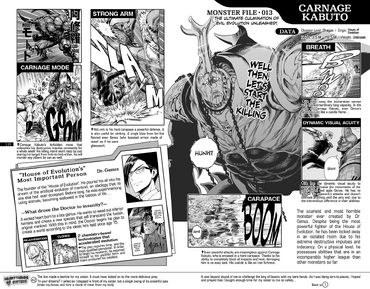