Episode 19
Bushidrill (ブシドリル, Bushidoriru) is the A-Class Rank 4 professional hero of the Hero Association and a disciple of Atomic Samurai.

Bushidrill has the look of a typical Japanese samurai from the Edo Period. His garb consists of black hakama worn over a black kimono. He has thick black eyebrows and a goatee, and his hair is tied back in a ponytail. 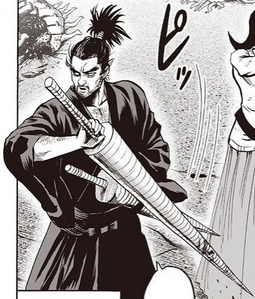 As the oldest member of Atomic Samurai's disciples, Bushidrill acts as the more mature and wiser of the three. He tries to persuade Iaian that fighting Garou singlehandedly would be reckless. He is also quite serious since he scolds Okamaitachi for dancing around when she is happy to eat sushi, as well as when Okamaitachi falls for a handsome monster.

As a disciple of Kamikaze, Bushidrill was recruited after an apple cutting test. As Kamikaze has the ability to tell how a person lived their life by cutting with a sword, he only recruits disciples if they pass his test.

At some point in the past, Bushidrill and his teammates fought Child Emperor and lost.

Bushidrill, Okamaitachi, and Iaian are waiting outside discussing about Garou's hero hunt, while their master Atomic Samurai is attending a meeting with the Council of Swordmasters.[3] After Atomic Samurai killed the monster Haragiri, Atomic Samurai then declared they will strike the Monster Association.[4]

This section is missing and contains outdated information. You can help by updating it.

He, Iaian, Okamaitachi and Kamikaze go around killing every monster they can find until the Association calls them in. They soon return to the Hero Association HQ where they are informed of the Monster Association hideout in Z-City. Okamaitachi decides to leave to take a shower when Sweet Mask shows up. While Okamaitachi was enamored with Sweet Mask, Sweet Mask quickly dismiss the inadequate members.

Bushidrill, Iaian and Okamaitachi encounter Do-S and the mind controlled mercenaries.[6] They battle but are interrupted by Sweet Mask. Sweet Mask calls for the swordsmen to leave the battle to him. Initially they leave the monster to Sweet Mask but distrusting his uncompromising nature, they return to battle Do-S.[7] Bushidrill confronts Sweet Mask about his killing intentions on the brainwashed Narinki's Private Squad but is rebuffed. Iaian convinces Bushidrill to drop the matter and they prepare to bring Narinki's Private Squad back to safety.

The three swordsmen are then swallowed up by Pig God, who found them and consumed them, and manages to bring all three of them up to the surface and regurgitate them without any noticeable injuries.

As a top-ranking A-Class hero, Bushidrill is an extremely skilled and powerful fighter. According to Fubuki, Bushidrill and his fellow teammates could have advanced to the S-Class if it weren't for Sweet Mask's gatekeeping.

Immense Strength: Bushidrill is strong enough to hold both Sosshi and Chinpi back while they were powered by their battle suits.

Immense Speed and Reflexes: Bushidrill can react to Devil Long Hair's attacks and fight back effectively.

Enhanced Senses: Bushidrill can sense murderous intent around him, and can strike without needing to open his eyes.

Expert Swordsman: It should be noted that Bushidrill is a swordsman under the tutelage of the S-Class hero Atomic Samurai. He is exceptionally proficient in swordsmanship.

Katana: Bushidrill carries katanas with a shape of a drill with him. The katanas are revealed to actually be more than just katanas: inside, there are several blades that can spin together to form a drill. Bushidrill uses his sword to drill underground allowing to form surprise attacks from below. 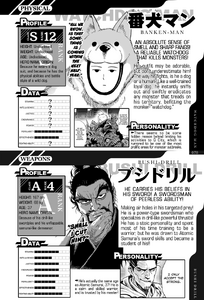