Bull-Bull is a large human who wears a hoodie with a cow pattern and his name on it, and a helmet with goggles and bull horns. 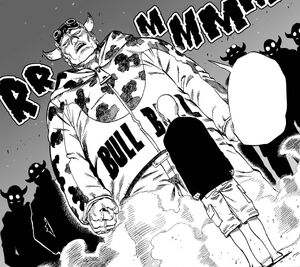 Bull Bull is a heartless individual, threatening to kill a child if the C-Class heroes didn't let them get away.

What Can't Be Bought[]

Bull-Bull and his crew of criminals attempt a bank robbery at a bank that Saitama just happens to be at. They take a child hostage but are interrupted by D-Pad and Funeral Suspenders. After successfully defeating several of his henchmen, both heroes are defeated simultaneously by Bull-Bull.

They quickly leave the bank, taking the child with them as a hostage. While driving away they suddenly lose control of their car due to Saitama lifting it up and running it to a vending machine he was previously trying to buy from. He is quickly defeated after leaving the car and attacking Saitama.

As an A-Class criminal it can be assumed that Bull-Bull is fairly powerful.

Enhanced Strength: Bull-Bull is shown to have great strength and is able to defeat two C-class heroes by ramming them with his head like a bull.

Enhanced Durability: Bull-Bull's head is five times stronger than that of a bull.[1]