Brave Giant is a powerful robot created by Child Emperor. It is his ultimate weapon and his trump card. According to Child Emperor, it is still a prototype.[1] The robot is piloted by a driver in its cockpit.

Brave Giant is a massive humanoid robot, multiple times taller than a full-grown adult. It has two pairs of eyes and four fins protruding out of his head in a backward fashion. Several blades extend out of its shoulders like small wings, as well as on his ankles, knees, and waist. On its back there is a large backpack, mimicking Child Emperor's own backpack and, inside of it, there are large jets, wings, and rockets that allow Brave Giant to fly at high velocities and utilize multiple different weapons. 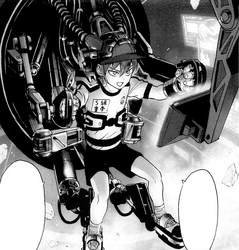 After Phoenix Man is resurrected and Child Emperor realizes his new and dangerous strength, the hero clicks his watch and summons the parts of the Brave Giant which are situated around the Monster Association Headquarters. Once Brave Giant is summoned, it swats Phoenix Man across the room, and the two begin their second battle. As the two of them do battle, Phoenix Man realizes that Child Emperor is rushing to finish the battle and realizes that there must be some limitations to the Brave Giant and that he can only operate it for a limited time. His hypothesis is correct, as Child Emperor laments that Brave Giant can only operate for 2 minutes and 38 seconds before its energy becomes uncontrollable and it self-destructs.

As the two continue their battle and unleash their respective special moves and combos, Child Emperor manages to trap Phoenix Man in a very strong electromagnetic web and attempts to punch him with his Giant Fist Strike, which Phoenix Man manages to block. A struggle ensues, with Phoenix Man appearing to overpower Brave Giant, but Child Emperor then activates over boosters and releases output limiters. The energy from the punch finally overpowers Phoenix Man and destroys the floor, sending both warriors falling into the water. Upon touching the base of the ground, Brave Giant's lights turn on and Child Emperor is shocked to see the corpses of several monsters littering the floor. Suddenly, a bright burst of energy is unleashed, knocking the Brave Giant back.

Phoenix Man, once again resurrected and stronger than ever, rips off Brave Giant's arm, taking the hostage Waganma with it, and uses his new powers to puppeteer the corpses in the subterranean pool and attack Brave Giant. Phoenix Man then flies out of the water to make his escape in the chaos. With little time remaining, Child Emperor makes Brave Giant's arm revert to its original drill form and knocks Waganma out of Phoenix Man's grasp. Brave Giant then destroys the multitude of reanimated corpses and flies out of the water to meet Phoenix Man, regaining its lost arm to use its final attack, Millennium Emperor Nova, and blasts Phoenix Man into the sky with a massive laser.

Brave Giant shuts down having spent its time limit. Little Braves come out from hiding and push the inactive Brave Giant at Phoenix Man. Child Emperor activates the emergency hatch and catches the monster with Brave Giant. Phoenix Man destroys Brave Giant but it allowed Child Emperor enough time to sneak Tickle-Tickle Bug #3 within Phoenix Man's costume and cause him to rip off his costume.

Being the trump card of the S-class genius Child Emperor, the Brave Giant is an extremely powerful and useful weapon, dwarfing all of Child Emperor's other machines in might. With Brave Giant, Child Emperor can go toe-to-toe against a Dragon-level mysterious being and when unleashing its full power, is able to temporarily knock out said mysterious being. Unfortunately, Brave Giant can only be operated for 2 minutes and 38 seconds before the energy core will no longer be controllable and will self-destruct, significantly limiting its capabilities.

Immense Strength: Being a large mech and Child Emperor's trump card, Brave Giant is immensely strong. It can effortlessly smash through multiple stone pillars and destroy an entire floor of the Monster Association headquarters. It was able to combat resurrected Phoenix Man's immense strength and once it unleashed its full power, it managed to defeat the Dragon-level monster and temporarily knock him out of commission before he resurrected again.

Immense Speed and Reflexes: Despite its large size, it has surprisingly advanced speed, being able to keep up with the dragon-level monster Phoenix Man and launch multiple speedy-quick attacks.

Immense Durability: Brave Giant's advanced body and sturdy exterior allow him to defend against searing attacks from Phoenix Man, and his Divider Shield was able to withstand the multiple Phoenix Homing Wing Attacks. Additionally, it was still operational after releasing all of its output limiters and unleashing its full power.

Hand-to-Hand Combat/Equipment: Due to his large size and advanced structure, Brave Giant is very powerful in close quarters, and Child Emperor will use its very powerful features creatively and in quick succession to quickly finish off his opponents due to the Brave Giant's limited operating time.

Retrieved from "https://onepunchman.fandom.com/wiki/Brave_Giant?oldid=181985"
Community content is available under CC-BY-SA unless otherwise noted.