Edit
watch 01:26
Alien Spotlight: Boros
Do you like this video?
Play Sound

Dominator of the Universe (全宇宙の覇者, Zen uchū no hasha)

Boros (ボロス, Borosu), also called Lord Boros (ボロス様, Borosu-sama) by his subordinates, was the leader of the Dark Matter Thieves, a group of alien invaders responsible for the destruction of A-City. Like Saitama, Boros faced a self-imposed existential crisis, having become so powerful that no battle thrilled him. His intergalactic travels in search of a worthy opponent led him to Earth, where he was killed by Saitama.[4]

Boros is the main antagonist of the Alien Conquerors Arc.

Boros was a very tall cyclops-like alien with light-pink, spiky hair and bangs that fell over his face. He had sharp teeth and pointed ears lined with a row of gold earrings (silver in the animated adaptation). He had one large blue eye and light blue skin with dark blue crack-shaped markings that started from his eye and covered most of his body. He wore a set of armor with spikes on the shoulder and forearms and wore a pair of matching curved boots. In the manga, his skin in his sealed form was purple with darker purple stripes on his face. He also had a red orb on his chest with purple markings on his stomach and arms. He wore a pair of white harem pants, held by a magenta-colored sash with silver-lined purple blades hanging from it.

After Saitama destroyed his armor, Boros's appearance changed into a second transformation. His muscle mass increased, and his body grew spiky plates and his spine and the surrounding tissue became exposed, while his skin changed to a navy blue color with light blue markings that emitted energy. He was shown with an additional yellow eye under his chest which moved in sync with his original, now yellowish-green eye and his hair was completely spiked up becoming slightly darker in color.

In his Meteoric Burst form, his appearance changed drastically. His hair grew, reaching his back, his eye became completely white, though at times a black pupil became visible, and his body got engulfed in white energy, while his markings returned to their original, dark blue color. 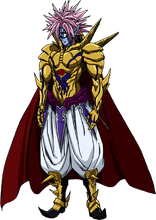 Boros's appearance when wearing his armour

Boros in his Meteoric Burst form

Because of his incredible power, Boros was both arrogant and prideful. Due to his love of battles and his inability to find an opponent who has been able to match him in power, he roamed the universe looking for worthy opponents that would be able to stand against him. He was also extremely callous, indifferent to the destruction and loss of life his invasion caused to A-City, and the destruction of his ship and the death of most of his crew while fighting Saitama. He did show a certain amount of courtesy and respect, reassuring Geryuganshoop when he was concerned about the ship, greeting and exchanging names with Saitama when he arrived and showed increasing amounts of respect to Saitama as their fight wore on and he continued to survive Boros's attacks. After being defeated, he seemed to be at peace with his imminent death, discounting the prophecy, but still satisfied that his fight with Saitama had been as exciting as he desired it to be, even if he was not victorious.

In battle, he was shown to have a very cautious and serious behavior, attempting to end fights quickly and make sure his opponent doesn't have any chance to surprise him.

An alien seer told Boros that on a faraway planet he would find an opponent who could fight on equal footing with him and give him the enjoyable fight he had always desired. Boros traveled the universe for 20 years before finding Earth.[5]

The Dark Matter Thieves appear above A-City and bombard it with shells, destroying 99.8% of the city in an instant.[6] The only structure left standing is the Hero Association headquarters.[7] Saitama, who was in the building, breaks into the spaceship and kills Groribas[8] and Geryuganshoop, two of Boros's top subordinates, much to the alien's surprise.[9] Saitama then confronts Boros.

Face to face with Saitama, Boros explains that he traveled to Earth because of a prophecy that foretold of a worthy opponent there.[10] He attempts to goad Saitama into fighting with him. Suddenly, Saitama punches him into a pillar and berates him for destroying A-City for a stupid reason. Boros, much to Saitama's surprise, survives the hero's punch and stands up. With his restraining armor now destroyed, Boros unleashes his true strength and prepares to fight the hero.[11]

Boros and Saitama engage in an intense fight. Seeing Saitama is unfazed by his attacks, Boros uses his trump card, Meteoric Burst and continues his assault on Saitama. He finishes his attacks with a knee that launches Saitama to the moon.[12] Soon, Saitama jumps back from the moon, landing right on the ship.[13] Upon the hero's return, Boros is surprised but also excited, and he charges at him with a barrage of attacks. Although Saitama is initially not moving, he soon counters with a normal punch that knocks him back before attacking him with his Consecutive Normal Punches, tearing Boros into pieces. However; his regenerative ability allows him to re-form almost immediately.[14]

Eager to end the fight, Boros decides to use his final attack, Collapsing Star Roaring Cannon, to annihilate Saitama and the planet itself. Before the blast hits the planet, Saitama uses Serious Series: Serious Punch to repel it and critically damage Boros. Defeated and incapable of regenerating from the heavy damage, Boros compliments Saitama for the splendid battle.[15] Boros then states that he knew he had no chance of defeating Saitama and that the prophecy that he had gambled on was a lie. Boros dies while a victorious Saitama leaves the ruins of the spaceship.[16]

Boros is a playable character in the video game, One Punch Man: A Hero Nobody Knows. He is also the final boss of the game's Story Mode.

Boros is one of the various characters able to be summoned. He is a powerful dark unit.

As the leader of the invading force of aliens, Boros had authority over the entire armada, his rule being absolute while being extremely powerful in his own right. According to Boros, his species developed the greatest regenerative ability in the entire universe to adapt to living on their home planet, which had harsh climates. Boros also appeared to be able to sense peoples' energy, which manifested itself as an aura around said person. Boros was the first enemy who survived a normal punch from Saitama, a notable feat considering all of the previous disasters had been obliterated, while Boros simply had his armor destroyed by the first punch.

Furthermore, he is the only opponent so far who has Saitama remark that the hero was "almost in a real fight".[17] In his fight with Saitama, Boros was hit with 3 normal punches, a Consecutive Normal Punches attack, as well as the shockwave from the hero's Serious Punch. His might was acknowledged by Saitama, who regarded him as a powerful opponent and even the strongest foe the hero had ever faced up to that point.

Boros was gifted with superpowers from birth, which vastly increased his powers with time and experience. He claimed that he, in particular, possessed regeneration, physical prowess, and latent energy that far surpassed all other members of his race.

Immense Strength: Boros displays extreme amounts of strength during his fight against Saitama. He was able to knock Saitama through several pillars of his ship with only one punch, the alien's various strikes easily damaging the place.

Immense Durability: Boros was shown to be amazingly resilient, to the point of being the first on-screen opponent of Saitama to survive after being hit directly by his normal punch, despite having his full power sealed by his armor. Even after receiving a direct punch from Saitama in his Meteoric Burst form, he remained intact, despite bleeding and injured.

Immense Speed and Reflexes: Boros possessed incredible speed and agility, as he was able to keep up with a casual Saitama. He used the latent energy shunted from his body as a means of propulsion, making him incredibly fast. Even at high speeds, Boros was very agile. Even inside the ship, the two were so fast that normal human eyes would have been unable to follow their fight.[2]

Immense Endurance: Boros had incredible endurance. Despite having his arm torn off by Saitama's punch, he showed no signs of pain.[18] After completely exhausting all of his energy using his final move and having his entire body nearly obliterated by the shockwave from Saitama's Serious Punch, without being able to regenerate, Boros was still able to stay conscious and briefly talk with the hero before finally passing away.[19]

Regeneration: Like the rest of his race, Boros had an incredible rate of regeneration, with Boros himself surpassing all others of his race as stated before. Boros had been shown to regrow an arm in seconds just by concentrating his energy on it. When struck by Saitama's Consecutive Normal Punches, he was blown apart but was able to regenerate his whole body in an instant. However, Boros' regeneration ability had a limit, as it showed in the end, he lost to Saitama and was unable to regenerate again after being struck by Saitama's Serious Punch as he had already used up all his energy.

Energy Projection: Boros could use the latent energy that his body produced to fire large energy blasts from the eye in his chest with great destructive power, enough to incinerate parts of the highly durable spaceship. These energy attacks have huge area of effect, as the one used against Saitama was shown spreading flames across the top of the gigantic spaceship when exploded.[20] He also combined his energy projection with his physical attacks, resulting in shockwaves and blasts capable of destroying city-sized areas.[21] According to Boros himself, the resulting blasts were so powerful that small fries would find even their bones vaporized instantly.[19]

Power Release (パワー解放, Pawā kaihō): Boros wore an ornate suit of armor that was designed to keep his immense powers in check. When the armor was removed from his body, it became black and spiky and began to glow from the released energy. Boros praised Saitama for being the first to last as long against his power in that state, suggesting that even in that form, Boros was immensely powerful compared to other enemies.

Highly Experienced Combatant: Boros was presumably a skilled fighter with decades of experience and not a single loss in combat.

Trump Cards: Boros had several techniques that he used when he wanted to finish a fight quickly or thoroughly destroy an opponent.

Restraining Armor: Boros wore a set of armor that restrained his power. It was shattered by Saitama's first blow. 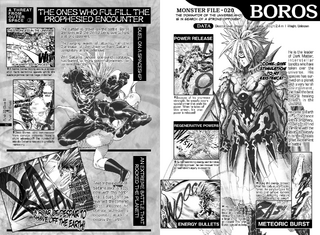