Bone is a muscular hero dressed in a skin-tight, full-body skeleton costume. 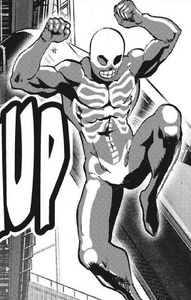 A typical hero of the Hero Association, Bone is a proud, glory-craving hero who fights Mysterious Beings to gain fame. He wants his achievements to be told to the coming generations.

Bone, along with Butterfly DX and Death Gatling, attempts to stop Hundred-Eyes Octopus in I-City.[2] He narrowly manages to rescue Red Muffler from the monster. After strengthening his bones by drinking milk, he attempts to fight the monster but is instantly defeated, and all his bones are crushed.[3]

He was later saved by Chain'n'toad when Tatsumaki drops the monster's corpse on him and other A-Class heroes.[4]

Bone, along with Heavy Kong and Peach Terry, is fighting the Internet Surfers. They are easily defeated, but they are saved by Sonic distracting the Mysterious Beings.

Bone was among the many heroes summoned by McCoy to combat the monster that was devastating the Z-City police station. He arrives at the scene late, after Saitama has already killed the monster.[5]

As a B-Class hero, it can be assumed that Bone is a fairly skilled combatant, though he is one of the lower-ranked heroes in B-Class implying he isn't very strong by the class' standards.

High Bone Density: Bone was born with a highly dense bone structure, which makes his body as tough as armor. Furthermore, for a short period of time, he can further increase his bone density by drinking milk or consuming food with high amounts of calcium.[6] However, all of these are still not enough to withstand a strike from a Demon-level monster, which shattered every single bone in his body.[7]

Enhanced Speed and Reflexes: Bone was able to save Red Muffler from a bus thrown by the Hundred-Eyes Octopus.[8]

Enhanced Endurance: Bone was able to survive an attack from the Hundred-Eyes Octopus, a blow that broke every bone in his body.