Edit
watch 01:33
Master Spotlight: Bomb
Do you like this video?
Play Sound

Bang, Who Is Too Overbearing (Cameo)
Episode 15

Bomb (ボンブ, Bonbu), also known with his alias as Wind of Death (死の風, Shi no Kaze; Viz: DeathWind),[1] is a martial arts master, the older brother of Bang, and the creator and teacher of Whirlwind Iron Cutting Fist. He and Bang are the two greatest masters of the Martial Arts world.[3] He is also part of the Saitama Group.

Bomb, like his brother, Bang, is an aged but muscular individual. Appearance-wise, he is almost the opposite of his younger brother. While Bang still has his hair and sports a short mustache, Bomb has a long beard and white, long hair with the top of his head being bald. He wears a classic-style green on blue martial arts robes, while Bang has a plain black shirt with white pants. He is slightly taller than Bang and he has a very strong posture, unlike Bang, who often slouches when he's walking. 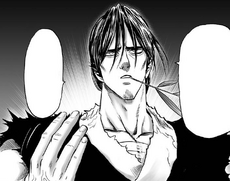 Bomb when he was young

Bomb is a caring older brother to Bang. He also seems to be a bit angry for having to dismiss all of his disciples, but is quite understanding as he believes there is a reason for letting his disciples go.[4] He worries over Bang's hero activities as he is constantly in danger, and suggests he retire.[5]

He is aware of the fact he is no longer young and his prime has passed, to which he laments.[6] That said, he holds hope for the future in the younger generation, as he was willing to not let Genos endanger himself in a reckless battle.[7] While not a professional hero, Bomb demonstrates all the essential heroic qualities, such as aiding heroes in times of need, protecting the weak, and engaging against monsters to prevent them from invading the cities.

Bomb is an extremely accomplished martial artist and the master of the Whirlwind Iron Cutting Fist, having demonstrated skills and capabilities on par with S-Class heroes. He has often accompanied his brother, Bang, in battles against monsters, including powerful Dragon-level threats.[8][9] It has also been stated by Murata that Bomb is even stronger than Bang.[10] In the past, even while holding back, Bomb was able to defeat Bang when his younger brother was using a brutal fighting style called Exploding Heart Release Fist to recklessly challenge any opponents he deemed strong.[11] Bomb claims that if he was 60 years younger, he could handle massive injuries like Garou, indicating that he used to have a lot of stamina and endurance.[6]

In the present, Bomb has since passed his prime, stating that he does not have the stamina he used to have, and that techniques like Roaring Aura Sky Ripping Fist take a toll on him.[8] Despite Garou's massive growth through many battles and being even in his evolved state, and Bomb having his stamina drained by Fubuki to heal Tanktop Master prior,[12] he still has proved capable of holding his own against the Hero Hunter for a short period of time before finally being defeated.[13]

Immense Strength: As a master martial artist in the same regards as his younger brother, Bang, Bomb possesses incredible superhuman strength, being able to shred Mysterious Beings into pieces with his hands alone.[14] Combining his strength with Bang, Bomb was able to destroy Elder Centipede's initial carapace; which was able to withstand Metal Knight’s missiles and Metal Bat's swing without a scratch, and send the enormous monster back.[8] He was also able to carry multiple bodies even after using the technique which took a toll on his body.[8]

Immense Durability: According to Bomb himself, he has a lot of durability, which enables him to endure massive damage and still remain standing. However, he states that he does not have the durability he used to 60 years ago.[8] Despite being knocked back by Elder Centipede, he and Bang took minimal damage.[8]

Immense Speed and Reflexes: Bomb possesses incredible speed and reflexes, as in a split second he shredded a monster into pieces with his hands in a circular motion before it could even react.[15] His attacks are so fast that it took the monster's body a moment to fall apart after Bomb completed his attack on it.[16] He was fast enough to quickly protect unconscious A-Class heroes from huge falling debris created by Elder Centipede.[8] Additionally, Bomb was capable of keeping up with Garou in combat while the latter was in his evolved state, with their movements being so fast that Fubuki could not even perceive the fight between them.[13]

Master Martial Artist: Bomb possesses great mastery over martial arts as he invented his own unique style and techniques from decades of martial arts training.[17] Garou himself even acknowledges Bomb to be the greatest martial art master alongside his brother, Bang.[18] In his fight with an evolved Garou, another martial arts master who is also Bang's former top disciple, despite Bomb being drained and the Hero Hunter having drastically improved his combat skills through many battles, he was still capable of competing with him, albeit only for a short period of time before being defeated.[13]