watch 00:56
Hero Spotlight: Blast
Do you like this video?
Play Sound

Blast (ブラスト, Burasuto) is the S-Class Rank 1 professional hero of the Hero Association. Without the knowledge of Saitama's strength, he is largely suggested to be the Hero Association's most powerful hero.[2] He currently appears to be going to various places in order to collect the Mysterious Cubes, which is a hobby of his.[3] Only a few select Hero Association staff members have the means to communicate with him.[4]

He is Blue's father.

Blast is a tall man of muscular build, with spiky, graying hair and a slight beard. He wears bulky armor with large shoulder pads, a large cape worn out at the bottom, and emblems of his name on his chest and the backs of his shoes. His gloves have circles on the back of his fists, which form an infinity symbol when he presses them together to teleport. His suit has mild damage, presumably sustained from his many battles. He also wears shades and has a scar running across his face between his eyes. The outline of his iris is a wavy black pattern, as opposed to just a consistent outline seen in other characters.

In the past, Blast's appearance was largely similar to today, but he looked younger, with darker hair and no beard. Additionally, neither his armor nor himself had sustained damage or injuries, and he did not wear shades.

In the webcomic, he sports the same spiky hair as seen in his manga appearances and appears to have a simple fabric suit with a front zipper outlined with a fiery contour. His suit looks very similar to Saitama's hero suit.

His eyes appear to be the same as his purported son Blue's: they have multicolored irises, light near the center but dark towards the outside. His hero costume also appears to bear some similarity to Blue's battle suit, with the gauntlets of both suits having circles on the back of the hand.[5] 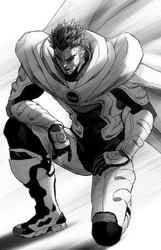 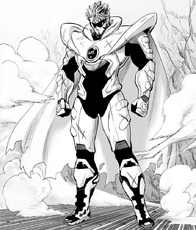 Blast does not disclose his personal information in the Hero Association Catalog. However; akin to Saitama, he considers his hero work as just a hobby. He also seems to have independent tendencies, keeping his location and status unknown, and advising Tatsumaki to use her own powers to defend herself rather than expecting others to save her.[6]

In the present, Blast has a casual and easygoing attitude as he did not seem to be very bothered by Saitama, Flashy Flash, and Manako touching the cube since they didn't know what it was nor did they accept the deal, and he was willing to explain what the cube was. Blast was also not angered by the fact that Flashy Flash tried to attack him, simply telling him to calm down, and he was willing to teleport all of them out of the area they were in. Blast did not question the presence of Saitama with an S-Class hero and even answered Saitama's question about him warping there; however, he became momentarily serious with the presence of Manako with them since she is a monster. After Saitama's explanation, he quickly went back to his easygoing attitude and accepted the explanation with no further questions.[7]

Blast's attack on the ninja village also indicates that he doesn't show mercy towards humans who he views as evil, similar to Sweet Mask.[10]

18 years ago, Blast saved Tatsumaki from a monster. He then introduced himself to the young esper and questioned her on why she didn't use her psychic powers to save herself. Tatsumaki answered that her powers weren't working, but Blast realised that she was lying. Knowing she still has her little sister, Fubuki, Blast told her not to expect anyone to save her, encouraging Tatsumaki to use her power and protect her only family.[11]

16 years ago, Blast allegedly fathered his son Blue with an unknown mother. Blue would then go on to create the Neo Heroes, becoming a powerful hero in his own right.

15 years ago, Blast defeated the Ninja Village Leader and put him into a coma.

9 years ago, on the night of the Ninja Village graduation exam, Blast attacked the Ninja Village and killed the trainees who managed to survive Flashy Flash's attack from earlier that day. Sonic managed to escape Blast's wrath, but the incident left him with a great disdain towards heroes.[12]

2 years ago, Blast fought Elder Centipede and brought him to the brink of death. However, the monster managed to escape underground before he had the chance to finish it off.[13]

During the S-Class meeting, Child Emperor is slightly disappointed in Blast's absence[14], which is later confirmed by Sitch who mentions his unknown whereabouts.[15]

Blast is mentioned in a Hero Association meeting. A staff member is frustrated at Blast's lack of activity despite being the top ranked hero in the S-Class. Sitch says that Blast cannot be ordered around, but has enough faith in Blast that should humanity be in peril, he will appear.[16]

When Drive Knight asks whether or not Blast will appear if the Hero Association Headquarters is attacked, Sekingar says that it is not very likely, stating that Blast is more or less retired.[17]

During Sweet Mask's mental breakdown, he has a vision of Blast telling him that everything is fine while a dead monster lays besides them.[18] This could possibly mean that Blast saved Sweet Mask from a monster in the past.

Tatsumaki similarly has a flashback of Blast back when he saved her from a monster 18 years ago. This flashback and the advice Blast gave provides Tatsumaki with the motivation to continue fighting even though her body was giving up on her.[19] An object that resembles the cube Blast was holding in Tatsumaki's flashback appears again during the Monster Association raid when Saitama pulls it out to free Flashy Flash's arm from some rubble. The cube is revealed to be extremely heavy, as it was able to get Flashy Flash's arm stuck, sink into the ground when Saitama drops it, and Manako was unable to lift it.

Blast suddenly appears to Saitama, Flashy Flash, and Manako after the voice of God speaks in their head due to their contact with the cube. He notes how he managed to make it in time and makes sure that they haven't accepted the deal yet. He briefly goes over the schematics of the cube and questions why Flashy Flash is so far below the ground. Flashy Flash then attempts to "test" the hero using his fastest kicks, but the hero manages to nonchalantly dodge and appear behind the hero in an instant. Blast notes how time flows slower in the space they're in than the outside and that he can take them to the surface. He also questions why they have a monster that's not their prisoner with them but leaves Manako be at Saitama's explanation. He then generates a portal to teleport all of them out, saying they would meet again and requesting the two heroes to send his regards to Sitch and Tatsumaki.

During the battle between the Monster Association, Hero Association, and Garou, Psykos manages to successfully take down Tatsumaki and mentions that it was naive for the heroes to be dependent solely on Tatsumaki to take down the Monster Association. Psykos says that they should have brought along Blast and Metal Knight to their hero team in which she refers to them as bishop and rook respectively. Even so, she thinks that they would not have helped.

Later, after Tatsumaki fights Saitama, she briefly contemplates telling him about Blast, but decides against it and flies away, much to Saitama's confusion. Tatsumaki then asks herself when Blast will come back.

Being the highest ranked hero of the Hero Association, it can be presumed that Blast is an extremely powerful S-Class hero. Fubuki mentions that Blast "sits atop the hero world" during her talk with Saitama in his apartment, putting Blast alongside King in terms of power.[20] Sitch also mentions Blast would only present himself if humanity is in peril and that he is valuable enough to receive special treatment over the other heroes.[21] Blast was able to bring Elder Centipede, a Dragon-level threat strong enough to combat the likes of Bang, Bomb, and Genos simultaneously, to the brink of death, although Elder Centipede was smaller and as such presumably weaker when he first fought Blast.[22] Despite this, Gyoro Gyoro believed that Blast could still defeat the giant monster even in his current state.

In just a few seconds, Blast effortlessly killed a giant monster that could smash through reinforced steel doors. Since the battle was offscreen, it's unknown how exactly he killed it, but the creature had a massive hole inside its torso.[23] When Blast placed his hand on Tatsumaki's head, he saw a vision of Fubuki and was able to tell that she's her sister. Due to this, it is implied that he may have some sort of psychic or mind-reading ability.[24]

In the databook, Fubuki speculates that Blast is stronger than King, can shoot lasers from his eyes and rules over psychic powers, and has the ability to command trillions of robots. She hypothesizes that he could beat the rest of the S-Class all at once.[25]

Blast also defeated the leader of the ninja village, who is regarded as the most powerful ninja to ever exist and stated capable of defeating Flashy Flash, Speed-o'-Sound Sonic, and the entire Heavenly Ninja Party at once as if he were handling an infant. The leader's defeat at the hands of Blast was so severe, that it put him in a 15-year long coma.

Immense Speed and Reflexes: Blast possesses immense speed and reflexes, as shown when he was able to easily react to and dodge Flashy Flash's fastest kicks from a very close distance and appear behind him in an instant, utterly shocking him.[26]

Immense Strength: Blast possesses immense levels of physical strength, easily able to carry around the Mysterious Cube, even casually spinning it on his fingertip in a playful fashion.[27] Meanwhile, this cube is heavy enough to cause Flashy Flash's arm to get stuck under it, and sink into the ground upon being tossed away by Saitama.[28]

Dimensional Travel: Blast possesses some sort of ability to generate portals which allow him to move through another dimension[29] or transfer objects.[30] When he generates a portal that resembles a black hole to teleport himself, Flashy Flash, Saitama, and Manako, he clasps his fists together and an infinity symbol appears across his fists.[31]

The Mysterious Cube: Blast was shown to hold a cube when having a conversation with Tatsumaki 18 years ago,[32] and he later appears again to collect the cube touched by Saitama, Flashy Flash, and Manako.[33] It is also revealed by him that there are multiple of these cubes in various places, and they act as sort of a transmitter to communicate with God, who he refers to as "him".[34] The cubes are able to distort the space and time within its vicinity.[35] Blast has been collecting these cubes as a "hobby" of his and teleports them to unknown locations.[36]

Retrieved from "https://onepunchman.fandom.com/wiki/Blast?oldid=196741"
Community content is available under CC-BY-SA unless otherwise noted.