Black Sperm (黒い精子, Kuroi Seishi; Viz: Black Spermatozoon) is a Dragon-level Mysterious Being and an executive member of the Monster Association.

After the Monster Association's downfall, Black Sperm becomes Saitama's pet, alongside Overgrown Rover, and is currently under the watch of Forte, Chain'n'toad, and Butterfly DX. He is also one of the few individuals aware of Saitama's strength, due to witnessing him defeat Garou.

Black Sperm is an odd-looking humanoid monster of diminutive stature. He has a completely black body and a pale, white face with black eyes and a tail-like protrusion on the top of his head. He is often portrayed in a more simplistic style than the other characters, reminiscent of ONE's original webcomic. 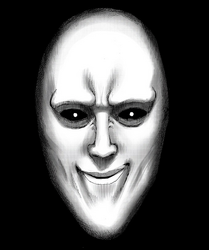 Black Sperm is an arrogant yet insecure monster. He is very confident in his abilities, shown in his willingness to take on Monster King Orochi, but he dislikes when other people "look down on him" for his appearance or personality, and if he senses that someone is doing so, he becomes furious. At the same time, he is willing to work with others in order to take on a stronger opponent, shown by his cooperation with the Monster Association.

Like other monsters, Black Sperm appears to care little for the lives of humans as he was about to kill the child kidnapped by the Monster Association without remorse. Likely due to his nature, he is accustomed to teamwork and is often the one to suggest teaming up with the other executives to take on strong enemies such as Tatsumaki. As more sperm cells merge together, the newly formed cell copies become more and more arrogant. When Golden Sperm is formed, the newly formed sperm copy becomes extremely arrogant, not even caring about his other sperm copies and telling them to simply merge with him due to his superior power.

After being defeated by Garou and then witnessing Saitama defeat Garou in turn, Black Sperm is humbled greatly. He begins to patiently bide his time and slowly build his cell stock back up over time. He decides to stick around with a stronger being, which happens to be Saitama in this case, rather than go off on his own.

As a Dragon-level Mysterious Being and an executive member of the Monster Association, Black Sperm is an extremely powerful being. He was able to easily overwhelm the S-Class hero Atomic Samurai during their battle due to his abilities being the perfect counter to the hero's fighting style.

Gyoro Gyoro believes that if Black Sperm and Homeless Emperor team up together, they can kill anyone.[4]

Sweet Mask stated that even if all of the S-Class heroes fought Golden Sperm, it would still be a very difficult task to defeat him. Along with this, he was the only one besides Saitama who was able to fight against evolved Garou on equal footing, even if it was only for a few moments. It is possible that, in the manga, Golden Sperm is the most powerful member of the Monster Association. Murata does not know who is stronger between Golden Sperm and Orochi in terms of raw strength, although Orochi is a more advanced combatant.[5]

Immense Strength: Contrary to his appearance, Black Sperm possesses great strength even with only one individual. A copy of himself was able to significantly injure Atomic Samurai, an S-Class hero, in one hit and was able to subdue the hero with overwhelming numbers of himself in no time during their battle.[1] In his larger state, he was strong enough to embed Genos into the ground with a single strike.[6] A smaller copy of himself has even shown to be able to tear off one of Genos' arms.[7]

Immense Speed and Reflexes: Black Sperm possesses impressive speed and agility, this was displayed when a copy of himself managed to react to and dodge an air slash from Atomic Samurai, with the swordsman was also somewhat impressed by his speed, saying he was a swift monster.[8]

Shapeshifting: Black Sperm is able to increase in size and manipulate his body shape in any way he chooses such as manifesting multiple heads or limbs.

Regeneration: Black Sperm possesses incredible regenerative abilities, as he was able to fully regenerate his body from being cut to pieces as well as being able to split into copies of himself in the process.

Replication: Instead of being killed, whenever he is dealt a fatal blow that would typically result in death, Black Sperm will split into even more copies of himself if he still has enough cell stock.[1] He can also split himself at will.[9][10] However, he is still susceptible to attacks that do not immediately cut him to pieces, such as blunt force[11] or acid attacks.[12]

Fusion: Multiple Black Sperm cells are able to fuse together into one being with greatly enhanced power. However, their fused form loses the ability to separate or regenerate.

Proficient Hand-to-Hand Combatant: Black Sperm often relies on brute strength and overwhelming numbers to defeat opponents. However, according to Drive Knight, he is a highly skilled combatant.[13]

Coalescence (合体, Gattai): Black Sperm irreversibly combines his cells to form a more powerful version of himself. The more cells he combines, the stronger and more arrogant the created version of himself will be.

Augmented Strength: As Golden Sperm, his strength is heightened. He was easily able to brutalise Vomited Fuhrer Ugly, a powerful Dragon-level threat,[16] and send Superalloy Darkshine flying, apparently knocking the hero out with a single punch.[17]

Augmented Speed and Reflexes: Golden Sperm is so fast that he was easily able to punch Fuhrer Ugly faster than the monster could react.[18]

Acid Resistance: Due to having the anticorrosive properties of gold, Golden Sperm is extremely resistant to acid to the point that he remained completely unfazed when Fuhrer Ugly unleashed a blast of acidic vomit directly in his face, which did no damage whatsoever (where it had previously melted straight through Superalloy Darkshine's skin).[19]

This state requires at least ten trillion cells to create. With it, he is able to defeat an injured Tatsumaki, as well as temporarily fight with evolved Garou. Sweet Mask went so far as to comment Golden Sperm was beyond his abilities, and that even if all the S-Class heroes ganged up against him, it would be a very difficult fight.

Psychic Resistance: Golden Sperm is able to very effectively resist an injured Tatsumaki's psychic attacks with very little effort. However, it has been confirmed that if she were at full power, he could lose.[20]

Augmented Strength: His strength was presumably augmented, but it was not shown due to Tatsumaki eliminating it instantly.

Augmented Speed and Reflexes: His speed and reflexes were presumably augmented, but they weren't shown due to Tatsumaki eliminating it instantly.

Augmented Durability: His durability was presumably augmented, but it still wasn't enough, as Tatsumaki was able to nearly effortlessly eliminate it.