Beast King was a large, very muscular humanoid lion with a full mane and tail. His humanoid, five-digit hands had sharp claws and padded four-toed feet.

He wore a black shirt, animal furs on his shoulders, and a leopard-skin cloth around his waist, secured by heavy chains and a belt with a lion-head buckle. There were bracelets on both his wrists and ankles and bracers on both biceps, which he breaks and shatters once enraged. 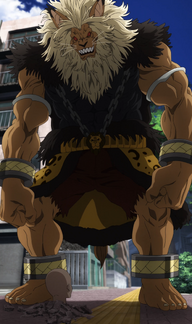 Beast King had little regard for his fellow mutants, dismissing his killings of Slugerous and Frog Man as the "law of the jungle."[3]

In the anime, Beast king also shows a level of patience, as when Saitama was cleaning out his belt, he calmly waited until Saitama cleaned out his belt to fight.

Saitama defeats Kamakyuri, Frog Man, and Slugerous in a failed ambush, but is grabbed and rooted in concrete by Ground Dragon. While Armored Gorilla repels Genos, Beast King taunts Saitama, threatening to scratch out his eyes. Unfazed, Saitama casually frees himself, sending Beast King into a limb-cutting frenzy.[5] He then accidentally kills Slugerous and Frog Man while trying to attack Saitama, but even after augmenting his strength, he is disemboweled by a flurry of punches from the bald hero.[6]

Beast King's death prompts Ground Dragon to flee and shatters Armored Gorilla's confidence, thus causing him to bargain with Genos and Saitama for his life.[7]

Sometime after his death, a flock of birds descends to pick at his entrails, causing them to sprout arms and become ravenous.[8]

As a Demon-level threat, Beast King was a powerful creature. Despite not harming Saitama, Beast King demonstrated immense strength, chiefly through murdering his teammates and inflicting massive collateral damage to the surrounding city block. He was also called the second strongest member of the House of Evolution by Armored Gorilla, who stated that Beast King could easily destroy Genos.[9]

Immense Strength: Beast King possessed an incredible amount of strength as he was able to easily cut through buildings with his claws, as well as with just the shock waves created from his slashes.

Immense Speed and Reflexes: Beast King was fast enough to perform multiple slashes within a short period of time.

Transformation: When enraged, Beast King gained considerable muscle mass, tearing through his clothing and ornaments. In this state, he lost all self-restraint, ignoring Dr. Genus' orders and harming his own allies.[10]