Baquma was a humanoid-monster resembling an elephant. He wore a sharp-looking suit similar to that of a magician. On his ears and head were the letters B, Q, and M. Once Baquma absorbed several monsters, he became bigger and grew four more arms. He also held a cane, and floated along the ground atop a robotic vacuum cleaner (or roomba). 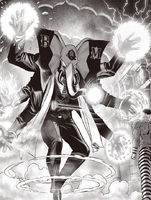 Baquma had a disregard for other lesser monsters as he would consume them to gain their abilities. Despite this, he held the leaders of the Monster Association, Gyoro Gyoro and Orochi, in great importance, as he did not want to return from a battle empty-handed and berates the retreating monsters for their cowardice. Like almost all other monsters, Baquma was arrogant and overconfident in his fighting capabilities, overestimating himself.

Baquma stops the monsters fleeing from Puri-Puri Prisoner, telling them that Gyoro Gyoro and Orochi will not tolerate any deserters. When they berate the monster by telling him to fight Puri-Puri Prisoner himself, he accepts their offer, then inhales the fleeing monsters, absorbing their powers.

As a Demon-level monster, Baquma was a very powerful being. He could easily dispatch the several Tiger-level monsters he absorbed such as Maiko Plasma. However, even after absorbing the other monsters, he was still not strong enough to withstand Puri-Puri Prisoner's Vibrating Dark Angel Rush, having destroyed completely by the technique from the hero.

Digestive Assimilation: Through inhaling a monster through his trunk, Baquma could temporarily utilize said monster's abilities. Whenever he did so, he gained a third eye and an extra trunk for each new power he obtained. However, after fully digesting the monster and excreting it, he lost the powers.