Bang's dojo has been in his family for generations. Because of this, he asserts that he cannot abandon it.[3] He currently teaches Water Stream Rock Smashing Fist there.[3]

Bang used to have hundreds of students, but they all quit when Garou went rogue and defeated them all. The only remaining student was Charanko, who was absent that day.[4] Bang is currently trying to recruit new students to his dojo. His primary targets are Saitama and Genos.

Bang teaching a class in the Dojo.

The dojo is located on top of a mountain in Z-City.[5] There are hundreds of stairs on the path to the dojo, and a waterfall starts from said mountain nearby. 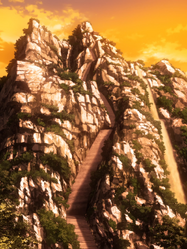 Bang's Dojo on a Mountain 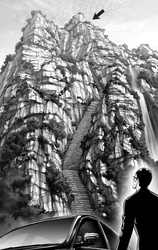 Bang's Dojo on a Mountain in the manga

Retrieved from "https://onepunchman.fandom.com/wiki/Bang%27s_Dojo?oldid=183496"
Community content is available under CC-BY-SA unless otherwise noted.