Edit
watch 01:30
Hero Spotlight: Bang
Do you like this video?
Play Sound

Bang (バング, Bangu), also known by his hero alias Silver Fang (シルバーファング, Shirubā Fangu), is a professional hero, a martial arts master, and the creator and teacher of Water Stream Rock Smashing Fist. He is the 3rd highest ranked S-Class hero of the Hero Association and is recognized as one of its most powerful heroes. He is currently settled in Z-City. In his youth, he was nicknamed Wind of Blood (血の風, Chi no Kaze; Viz: BloodWind).[3]

Bang and his brother, Bomb, are the two greatest masters of the martial arts world.[6] He is currently trying to recruit new disciples into his dojo, with his main targets being Saitama and Genos.[7][1] Bang is also part of the Saitama Group.

After the battle with Garou and the Monster Association, Bang retires from the Hero Association.

Bang is an elderly man and walks with a slight hunch in his back. He has light blue eyes and tan skin. He has spike white hair, thick white eyebrows, and a thick white mustache. He wears a long-sleeved black martial arts jumpsuit, light-colored pants, and Tai Chi slippers. Despite his old age, his body is lean and very muscular, and it is covered in scars. 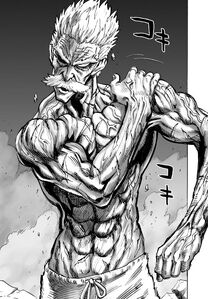 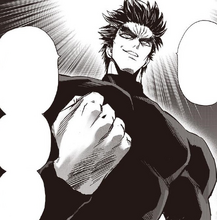 Bang when he was young

Bang appears to have a serious personality, however; his true personality is said to be surprisingly playful.[8] His demeanor is normally calm, shown when he is seemingly unperturbed by the Dragon-level meteor falling on Z-City. Unlike most other heroes, Bang prefers to be called by his name rather than his hero alias "Silver Fang".[9]

Bang is also well-grounded in the ethics of heroism; he accuses the other S-Class heroes of being heartless for ignoring the disaster in Z-City and attending to their own problems instead. Additionally, when witnessing Tanktop Black Hole accuse Saitama of causing the civilians' misery, Bang watches from a distance sympathetically, but without interruption, noting that heroes have to take responsibility for their actions, and will normally have to deal with the lack of appreciation for their work. Later, when his disciple Charanko confronts Saitama by praising his martial arts master's skill and hero rank, Bang scolds his disciple not to embarrass him and states outright that Saitama is many times stronger than he is.

Perhaps due to losing all but one of his disciples to his former top disciple Garou (on top of his old age and his remaining disciple's incompetence), Bang is always eagerly looking for new disciples to succeed him. After stating that he would not want the meteorite to fall on Z-City as it would erase his dojo, Bang quickly demonstrates his Water Stream Rock Smashing Fist, to Genos, only to realize that the cyborg had already left. Later, he invites Saitama and Genos to his dojo to try and recruit them to his dojo. His unyieldingness to protect the citizens/civilians can be said as strategic importance in the world of heroes. He has a sense of nobility and moral integrity, thus earning respect from the other heroes.[4]

Bang cares deeply for his former disciple, Garou. He fears for Garou's fate of becoming a monster, a process that seems irreversible.[11] When meeting him face-to-face once again, Bang shows utter contempt for his fallen student, spitting that he has become nothing more than an animal.[12] During their final confrontation, Bang laments how far the young man has fallen, and resolves to bring him around,[13] and train him truly again.[14]

In his past, Bang was shown to be pompous, arrogant, and abrasive, very much like Garou. He would go around challenging fighters who appeared strong and constantly put them in the hospital in order to grow stronger and prove his talent.[15] Whereas his current martial art style focused on self-defense and redirecting opponent's attacks, Bang's past martial art style was geared toward destructive power, a reflection of his violent nature. He believed that his power was meant solely for enjoying himself, and was willing to fight whoever it took to make himself stronger. His arrogance and malevolence grew to the point that he was fully intending on killing his older brother during their fight. However, after having been defeated by Bomb, he became humbled, focusing on developing his Water Stream Rock Smashing Fist as a defensive martial art and opening up a dojo to follow in his brother's footsteps.[16] Nowadays, he seems to wish to leave his older self behind and forget it completely. This is shown in his fight with Garou, as when the Hero Hunter started using Exploding Heart Release Fist, his former martial art, Bang refused to use it, despite the fact that he was being forced into a corner and using it would give him an advantage.

As the third-ranked S-Class hero, Bang is one of the most powerful heroes of the Hero Association. Even among the S-Class, his presence is exceptional.[4] He is also an outstanding proficient martial artist and a capable martial arts teacher, having taught Water Stream Rock Smashing Fist to his former disciple Garou, who is also incredibly skilled in the art. Garou himself has also stated that Demon-level beings like Bug God and Royal Ripper are nothing compared to his former master.[17] He is known as an idol and treasure of martial arts, almost being like a god in the martial arts world,[18] and thus one of the most skilled and powerful martial artists in the world, despite the fact that he is past his physical prime. He and Superalloy Darkshine are considered the twin pillars of the hero world.[19] Bang's combination of immense physical power and vast martial arts prowess makes him one of the most powerful close-range fighters in the Hero Association. His martial arts knowledge and experience enabled him to gain the upper hand against Superalloy Darkshine in a sparring match, despite the latter having greater physical prowess.[20] His amazing strength was demonstrated again during his fight against Gums and Fuhrer Ugly, two Dragon-level Mysterious Beings, capable of kicking through the former and thrashing the latter without apparently much effort.[21] Additionally, despite Garou's massive growth through many battles, and being even in his evolved state, Bang still has proved capable of fighting on equal footing with the formidable former disciple for a considerable amount of time before finally being defeated.[22][23][24]

Immense Strength: Despite his old age, Bang possesses incredible physical strength, far beyond that of an average hero, even by S-Class standards. He has been shown to be able to destroy meteorite fragments with his bare hands.[25] Upon facing Fist Fight Djinn, a Demon-level threat, Bang was able to annihilate the monster in an instant, to the shock of Smile Man.[26] With a single punch, he was able to create a huge crater as it made contact with Garou, who was lying on the ground.[27] Combining his strength with his brother, Bang was able to knock Elder Centipede back and destroy the enormous monster's carapace armor, which was durable enough to withstand Metal Knight's missiles and Metal Bat's swings without a scratch.[28] Against Gums and Fuhrer Ugly, two powerful Dragon-level Mysterious Beings, Bang was capable of kicking a large hole through the former,[29] and overpowering the latter with a series of strikes, causing heavy damage to the monsters.[30]

Immense Speed and Reflexes: Bang possesses impressive speed and reflexes, far beyond that of average heroes. He was able to follow the movements of extremely fast opponents and could not only outrun a falling spaceship but also all of the S-Class heroes present, such as Atomic Samurai, Metal Bat, and Puri-Puri Prisoner. Atomic Samurai even questioned how Bang can be so fast, despite being one of the fastest S-Class heroes himself. During a sparring match with Metal Bat, he was able to dodge and repel all of Metal Bat's swings, as well as significantly exhaust him with little effort.[31] His immense speed allows him to deliver high-speed combos in an instant,[32][33] and run dozens of miles before tiring, being able to run much farther in his prime.[10] He was able to move faster than Do-S could see and incapacitate her along with many of her love slaves within mere moments.[34] When a horde of Black Sperm clones surrounded him and Genos, Bang was capable of dispatching multiple clones in quick succession.[35]

Immense Durability: Bang is incredibly resilient. He was able to survive a direct hit from Melzargard that sent him crashing through several pieces of concrete debris without apparent injuries, the same attack blew off the A-Class hero Iaian's arm.[36] After being forcibly thrown to the ground by Elder Centipede, Bang only sustained little damage.[37] Elder Centipede's stomach acid, which damaged Genos's parts, left only minor marks on his skin.[28]

Enhanced Stamina and Endurance: Bang possesses an amazing level of stamina. He is able to run a few dozen kilometers before getting winded, although his age has taken a toll on his stamina.[10] Throughout the course of the battle against the Monster Association, Bang was able to proceed through several fights ranging from brief to long durations, such as against Overgrown Rover,[38] Gums and Fuhrer Ugly,[39] and hordes of Black Sperm clones.[40] Despite his injuries and tiredness fighting against an evolved Garou, he managed to endure the pain and continue engaging with his former disciple.[41] After regaining consciousness in spite of his injuries and fatigue from fighting Garou, Bang was one of the last heroes to fall to Cosmic Fear Mode Garou's cosmic radiation, having stayed conscious long enough to talk to and confront the monster as well as witness Blast's arrival and fight with Garou.[42]

Enhanced Senses: Bang's senses are far beyond the human norm. He was capable of sensing an evil presence inside of Garou that was influencing his disciple's behavior.[43]

Master Martial Artist: From decades of experience and training, Bang is one of the most powerful martial artists in the world. Bang possesses a vast knowledge of martial arts and, as a result, was able to create his own martial art. He is considered to be the "Greatest Treasure of Martial Arts".[44] His Water Stream Rock Smashing Fist is much more efficient and precise than Garou’s, as Darkshine himself made the comparison after fighting the Hero Hunter, stating that compared to Bang, his technique was still far from perfect.[45] Garou must make a conscious effort in order to use the techniques, but for Bang, it has become part of his very being.[46] His mastery of martial arts was also displayed in a sparring match against a fellow S-Class hero, Superalloy Darkshine, whom Bang was able to avoid and deflect all attacks from,[20] as well as during his clash against Fuhrer Ugly and Gums, two powerful Dragon-level threats, in which Bang was capable of skillfully deflecting all attacks from the former and redirecting them at either itself or towards Gums.[47] In his fight with an evolved Garou, his own former disciple who is himself an extremely skillful fighter, despite the latter having drastically improved his combat skills through many battles, Bang was still capable of fighting him on equal footing in a contest of pure hand-to-hand combat, even gaining the upper hand at some point.[48][49][50] 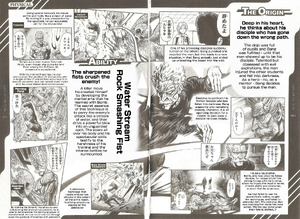 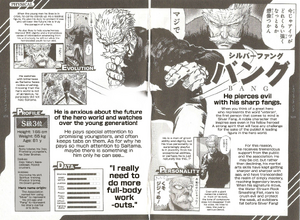