Bakuzan ( バクザン, Bakuzan) was a martial artist and user of the Dark Hell Assassination Art fighting style and was a top contender in the Super Fight tournament.[4] After eating a monster cell, he turned into a monster and joined the Monster Association. He was killed by Saitama.[5]

Bakuzan was a muscular man with spiky dark hair. He kept his sideburns unkempt and spiky and had a bushy uni-brow and goatee. He wore a white martial arts uniform with torn sleeves.

As a Mysterious Being, he became much bigger and muscular, his height is just a bit shy of Gouketsu's. He lost his shirt, which left only his white trousers. His sclera became black and his pupils orange. His ears and teeth became pointed and he grew black fur over his legs, arms, and back. He also grew another pair of arms, spikes on his shoulders and elbows, three lemur-like tails, and horns over his head. 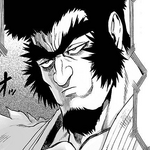 Human Bakuzan in the anime

Monster Bakuzan in the anime

Bakuzan was quite prideful and wished to make his actions meaningful. He was also quite bloodthirsty, wanting to kill Suiryu. He proved it again when detailing how he would hurt Saitama with a smile on his face. Moreover, he was extremely arrogant during battle as he stated that all contestants in the Super Fight Tournament are a bunch of weaklings.

He believed that martial arts contests are not meant to be a sport, but rather a place to put one's life on the line. For that reason, he looked down on his fellow martial artists who treat the tournament as sparring and competition.[6] Furthermore, he had a great desire to fight strong opponents since he felt that fighting a weakling was an insult to his ego. He was excessively brutal towards his opponents, especially those he felt were not worthy of facing him. Despite his massive ego and arrogance, he had keen enough perception to realize that Suiryu was stronger than him, as well as the power gap between humans and monsters through observation. As a result, he felt jealous of Suiryu's strength.

Upon seeing Gouketsu overpower Suiryu, he was amazed at how much power a human can gain after becoming a Mysterious Being, and so he chose to give up his own humanity to become the greatest living specimen. His hate for Suiryu grew so much that, disregarding Gouketsu’s warning, he ate all the remaining Monsters Cells, almost dying in the process, to not let Suiryu become a monster too. This shows in certain situations he can be greedy.

When he became a monster, similar to other Mysterious Beings, he became filled with bloodlust and hatred, slamming Suiryu into the ground and knocking him out cold. At this point, the power he gained from the Monster Cells had gotten to his head, and he proclaimed himself to be the strongest, but his arrogance was short-lived as Gouketsu easily overpowered him during their brief skirmish, and explained that there are even stronger monsters than him in the Monster Association.

The Monsterfication made him even crueler and sadistic than before as he took extreme pleasure in humiliating and torturing weaker opponents. He had no qualms to admit that, for him, the only reason to become stronger was to be able to prey on weaker fighters, and he seemed to be much more deranged than before, having completely forsaken his previous serious and cold demeanor and showing, as a monster, an almost always sinister and maniacal smile.

Despite this, he was capable of displaying shock when faced with opponents stronger than him; known cases being Saitama and Gouketsu. However, in the case of Saitama, Bakuzan retained most of his extreme arrogance when confronting the hero as a monster, although he initially did show some disbelief when he first recognized him. Despite his attacks all proving to be obviously useless against Saitama, he still assured Saitama that the hero could not defeat him, and that Saitama was paralyzed by fear, showing that he had become less observant as a monster. As a result, his arrogance proved to be his downfall, as Saitama blew off half of Bakuzan's body after he tried his final attack on Saitama.

He was a two-time winner of the Super Fight Tournament, known for winning in an extremely one-sided manner, due to his extremely brutal fighting style.[7]

Bakuzan is participating in the Martial Arts Tournament in C-City at the C-City Super Stadium. This is the third time Bakuzan has participated in the tournament.[8]

The Super Fight staff decide to evacuate the tournament when monster reports started to pop up, but Bakuzan goes against that decision, stating that it would only cause chaos. Also, he suggests that he will take care of any monster that comes in.[9]

Bakuzan prepares to face Saitama (who is disguised as Charanko) as the crowd and commentators are in awe of him. Bakuzan warns his opponent to be on guard and to prepare to defend himself. Otherwise, he will mercilessly crush Saitama instantly. However, much to his ire Saitama is not listening and struggles to tie his belt. An annoyed Bakuzan claims that Saitama 'is dead'.[10]

Bakuzan walks up to Saitama when the match begins, puzzled by Saitama's lack of movement. He becomes irate when Saitama does not take on a stance, believing him to be untrained and an insult to fight. When Saitama asks for a demonstration of his strength, Bakuzan agrees to comply, detailing exactly how he intends to defeat Saitama, in a brutal fashion. However, he touches Saitama's head and nearly knocks over his wig, causing Saitama to punch him into the air in panic. Bakuzan crashes into the floor headfirst, defeated, much to the shock of the audience and the commentators.[11]

Bakuzan is later present at the closing ceremony, visibly displeased, when it is suddenly interrupted by The Three Crows and Gouketsu, who tells them they will become monsters.[12] He later watches silently as Suiryu fights the transformed martial artists.[13] As The Three Crows attack Suiryu, Bakuzan is asked for help by the martial artist, but he refuses. Bakuzan acknowledges Suiryu for being stronger than him and decides to become a monster instead. However, rather than taking one monster cell, Bakuzan eats several of them and gets knocked out in the process.[14] He then awakens after transforming progressively and attacks Suiryu.[15] After a brief argument with Gouketsu, Bakuzan attacks Gouketsu, but is defeated. Gouketsu then tells him that in the Monster Association there are more powerful monsters than Gouketsu himself and that it would be wise to escape before the heroes arrive.[16]

However, Bakuzan puts all these words out of his ears and begins to torment Suiryu physically and mentally, to the point where he is willing to stomp on the injured Sneck to make Suiryu feel even more despair, only for Saitama to come in time and save Sneck's life. Despite being defeated by Saitama, Bakuzan seemingly forgot who he is.[17]

After realizing Saitama is the one who defeated him in the first place, Bakuzan uses all the moves he had demonstrated during their first confrontation to get revenge on him. However, none of the attacks faze Saitama, only moving him a short distance. But due to his extreme arrogance, Bakuzan cannot comprehend the fact that Saitama is unfazed by all his attacks and deduces that Saitama is paralyzed by fear. In order to finish the fight, he initiates the Hell Dispatch Chop as the final blow, only for Saitama to blow off half of his body, killing him.[18]

Bakuzan was considered a favorite to win the Super Fight Tournament and was even titled, "Strongest Man in the History of Super Fight", which included two A-Class Heroes and former four-time winner Suiryu, likely due in part that he was a two-time winner himself. Though he later admits that Suiryu was stronger than him, his body was strong enough to withstand eating multiple Monster Cells, something Gouketsu was surprised at.

After his transformation into a Mysterious Being, Bakuzan grew dramatically more powerful than before and was even considered by Gouketsu to be a Dragon-level threat.

Enhanced Strength: As Bakuzan was titled the Strongest Man in the History of Super Fight, it is suggested that he had enormous levels of strength to an unknown degree. Most of his fights ended in a brutal bloodbath, which meant that the referee wanted to stop the match as soon as possible for the competitor's safety.

Enhanced Durability: Bakuzan was quite tough. He survived being sent into the air by Saitama and having his head hit and puncture the ground after the fall,[19] only showing to sustain minor injuries afterwards.[20]

Augmented Strength: Bakuzan was one of the six martial artists within the arena to eat the Monster Cells from Gouketsu. After his monsterfication, Gouketsu estimated that Bakuzan's disaster level would be Dragon, implying that his power had grown drastically. However, he was still no match for Gouketsu.[21]

Enhanced Speed: As a monster, Bakuzan was able to deliver high-speed combos in a matter of seconds. He was also able to quickly catch Suiryu in the air when the latter was trying to escape from Gouketsu as his last attempt.

Expert Martial Artist: As a two-time winner of the Super Fight, Bakuzan is a very powerful fighter to the extent that most other martial artists fear him.

Longevity: Like any human who had eaten a monster cell, Bakuzan gained a longer life span.[27]