After the battle against the Monster Association, Metal Bat quits the Hero Association and joins the Neo Heroes. His reason for leaving is still unknown.

Metal Bat is a young man with black hair styled in a pompadour, and dark eyes that emphasize his hot temper. He wears black bontan pants and a black Japanese school uniform, which he drapes over his red long-sleeved turtleneck sweater. 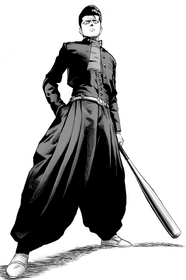 Metal Bat has a great deal of confidence in himself, stating that he does not care whether a threat is a Demon or Dragon level.[3] He also seems to be brash and reckless, as shown when he immediately smashed one of Melzargard's marbles instead of trying to analyze what purpose it serves for the enemy. Furthermore, he was willing to challenge Sweet Mask for his mocking attitude before being interrupted by a call from his sister and Sweet Mask's manager.

Despite his brash attitude, he still has a soft side in him when it comes to his sister, Zenko, who he treats very well and spoils to an extent. He values promises between Zenko as shown where he refused to take down Garou in Zenko's presence despite being attacked by him due to a commitment to never show her violence.[4] He has also demonstrated similar love towards his pet cat, Tama. Like Saitama, he doesn't care about his rank, and accidentally kills his enemies faster than he intended, such as when he executed Rafflesidon and Senior Centipede before he could get any answers for their motives. After waking up he is usually quiet unlike usual, though he claims he is not a "morning person."

Bad also proves to be quite observant, being very mindful of his surroundings and is astonishingly perceptive of characteristics in people. This is demonstrated when he was surveying the seemingly resurrected Neo Leaders, whom were taken into intensive care.[5] Fearing how they're abusing their secrecy to facilitate an unknown agenda, something he realized upon noticing how the samaritan staff who had undergone cyborgification are rendered mentally and emotionally numb as soon as he looks at them.[6]

As an S-Class hero, Metal Bat is very powerful. Despite his lower rank, he is a powerful and intimidating combatant, threatening Sweet Mask (whose abilities are worthy of S-Class) with no fear, as well as holding his own against Garou.

He is particularly hardy, capable of taking on multiple Demon-level monsters at once even after being drugged by one amid the fight. He has also stood up to dragon-class monsters, managing to cause Elder Centipede considerable pain with his swings. He was also able to fight against Garou in a duel, despite being gravely injured earlier by repeated battles against increasingly powerful enemies. While he was initially unable to do any damage against Sage Centipede, once empowered by his Fighting Spirit, he was capable of cracking Sage Centipede's defenses, which were significantly more durable than Elder Centipede's carapace defenses.

"When the intensity of Metal Bat's anger reaches its maximum, his power approaches infinity."[2]:

Evergrowing Strength: Metal Bat possesses immense physical strength and has taken out many powerful monsters and villains with a single swing of his bat, including two Demon-level monsters simultaneously, even Senior Centipede, whose carapace can withstand Genos's Incineration Cannon,[7] could not survive a single swing from his bat.[8] Even without Fighting Spirit, he has shown to be able to kill Demon-level foes with one swing.[9] Despite being unable to break Elder Centipede's incredibly tough carapace, he did push the giant monster down and completely stopped it in its tracks.[10] It's noted that his Fighting Spirit heightens his strength, as Garou observed that the longer the fight drags on, the more powerful Metal Bat becomes, to the point that he can easily destroy buildings and tear the ground apart, causing powerful shockwaves.[11] Garou even complimented him, stating that if he received even a single strike from the bat, he would have lost the fight.[12] The power of his swing has impressed the likes of Superalloy Darkshine and Bang.[13][14]

During his fight with Sage Centipede, Metal Bat's Fighting Spirit eventually increased his strength enough to the point that he, together with an evolved Garou, was able to damage and crack the giant monster's tough carapace,[15] which was more durable than that of Elder Centipede, whose carapace Metal Bat himself once failed to damage. Despite this, Metal Bat's sheer strength was inferior to the Hero Hunter's by a large margin, and his attacks were momentarily amplified by Garou's due to the very similar nature of their strength, called "resonance".[16]

Immense Speed and Reflexes: Metal Bat was able to escape a falling spaceship fairly quickly, and he even considered Puri-Puri Prisoner slow.[17] Metal Bat also possesses superhuman reflexes as seen in his fight against Garou, where he's able to deflect and block Garou's multiple punches despite being injured in his battle against Elder Centipede. Metal Bat's speed, with the Fighting Spirit, can even grow to be too fast for Garou's martial arts to compensate.[18] However, Murata has stated that Metal Bat is slower than Sonic.[19]

Immense Durability: Metal Bat also possesses immense durability. He was able to take many hits from Senior Centipede, a Demon-level monster with piercing power, and from Garou, a mighty fighter capable of easily defeating superhuman foes.[20][21] Also, he received a direct hit from Elder Centipede that sent him crashing into a building which destroyed part of it upon impact but did not seem to be fazed by the attack afterward.[22] His durability also becomes more powerful with more Fighting Spirit; as the fight between him and Garou progressed, he became almost immune to some of Garou's attacks.[23] Additionally, Metal Bat also showed little reaction to hitting himself on the forehead with his bat in order to counter Rafflesidon's tranquilizing gas.[24] Virtual Genocide System's (VGS) simulations show that Metal Bat can fight Carnage Kabuto for three minutes, whereas Genos was defeated in two blows despite being already upgraded after the fight with Deep Sea King.[13] His most remarkable feat of durability shown is when he survived Sage Centipede's Grand Centipede March, who was significantly stronger than Elder Centipede, enduring many strikes from the monster, albeit he has received deep injuries.[25]

Scaled Endurance: Metal Bat possesses a great deal of endurance. Metal Bat can seemingly continue fighting for as long as he has Fighting Spirit, as he was able to go beyond his body's limits. He can continue fighting even when he has immense amounts of bleeding and multiple fractured bones.[26] Metal Bat was able to fight and survive through battles with multiple Tiger-level and two Demon-level mysterious beings along with 1 Dragon-level mysterious being and Garou in rapid succession with little time in between them to rest. Metal Bat states that if he had Fighting Spirit during the Virtual Genocide System's (VGS) simulation, he would have performed better against Carnage Kabuto.[13] However, even with Fighting Spirit, his endurance has a limit, as he was unable to continue fighting Sage Centipede after having been damaged so many times by the monster.[27]

Healing Factor: Metal Bat possesses the ability to recover from minor blood loss and fractured bones in a matter of days just by resting.[28]

Sedative Resistance: Metal Bat has a strong body that can resist sedative drugs, despite the sedative normally being used on large animals. He was still able to walk while under the effects of that sedative which impressed Elimin.[29]

Street Brawler: Matching his appearance and demeanor, Metal Bat usually fights in a manner typical to that of delinquents where he uses his unbreakable bat to bash his opponents into submission or death with Garou judging Metal Bat's overall fighting style to be like that of an amateur. However despite his lack of sophisticated techniques, his skills is shown to be effective against most monsters because of how simplistic they are, and by swinging his bat at different intervals and unorthodox ways, he can become more formidable.

Fighting Spirit (気合い, Kiai): Metal Bat is capable of getting stronger through his damage intake and anger buildup.[34][2] This is because of his will to continue to fight regardless of what happens. Instead of succumbing to the damage he receives, Metal Bat gets an increase in his physical attributes. This ability is mainly shown during his fight with Garou wherein he gets tougher, faster and a lot more durable as the conflict drags on.[35] However, his Fighting Spirit lowers extremely fast when he is out of battle and exhaustion can quickly set in. Even while in battle, it is still possible for Metal Bat's Fighting Spirit to reach a limit, as he was unable to continue fighting after having been pummeled by Sage Centipede.[36]

Keen Perception: Despite his brash nature, Metal Bat seems to be very alert, as he was the first one to discover Melzargard's weakness. He was able to notice that Elder Centipede protected his face and deduced that its unprotected face was its weak spot.[38] Metal Bat was born with amazing dynamic vision.[2]

Metal Bat: Metal Bat's signature weapon. It is a gray metal bat with a black handle. It is, with Metal Bat's strength, strong enough to kill Demon-level monsters with one hit. It was crafted personally for him when he joined the ranks of the S-Class and requested a bat that wouldn't break.[39] It is extreme durable, enough to withstand attacks from Sage Centipede, a Mysterious Being of even greater strength than Elder Centipede.

Upgraded Bat: (Formerly) Bad's new signature weapon. In addition to providing all the functions of his old bat, the upgraded bat has retractable spikes and can generate electricity, both of which substantially increase his power output. Metal Bat quickly wrecked his new swinging club fighting off the Neo Heroes Human Resources members. It is later revealed that his new weapon had been intentionally dampened down in durability by the Neo-heroes to prevent Bad from effectively resisting the Neo-heroes bionically enhanced security personnel.[40]