The disciples are severely defeated by Evil Natural Water 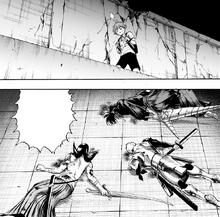 Evil Natural Water launches several of the Mad Doctor Fish at Iaian, who deals with them rather easily. However, after just a single jet of water pierces Iaian's sword, the hero quickly realizes the hopelessness of the situation, mulling over about how their master has yet to teach them the method for "cutting water". Despite the forlorn situation, the three Disciples take their stances and prepare to do whatever they can.

The disciples are later found defeated by Child Emperor.

Retrieved from "https://onepunchman.fandom.com/wiki/Atomic_Samurai%27s_Disciples_vs._Evil_Natural_Water?oldid=172205"
Community content is available under CC-BY-SA unless otherwise noted.